A US academic who invented the theory of ‘human economics’ and who starred alongside Selena Gomez in the movie The Big Short has won the Nobel Economics prize.

Richard Thaler, a professor at the University of Chicago, won the award for showing that economic and financial decision-makers are not always rational, but mostly deeply human.

Bridging the gap between economics and psychology, Thaler’s research focuses on behavioural economics which explores the impact of psychological and social factors on decisions by individuals or groups in the economy and financial markets.

His work even earned him a glamorous foray into the movie business when he made a cameo appearance, alongside Christian Bale, Steve Carell and Ryan Gosling, in the 2015 movie ‘The Big Short’ about the credit and housing bubble collapse that led to the 2008 global financial crisis.

American academic Richard Thaler (pictured), who invented the theory of ‘human economics’ and who starred alongside Selena Gomez in the movie The Big Short, has won the Nobel Economics prize

His work even earned him a glamorous foray into the movie business when he made a cameo appearance, alongside pop star Selena Gomez (right) in the 2015 movie ‘The Big Short’ about the credit and housing bubble collapse that led to the 2008 global financial crisis

In his cameo, he appeared in a scene alongside pop star Selena Gomez to explain the ‘hot hand fallacy,’ in which people think whatever’s happening now is going to continue to happen into the future.

‘By exploring the consequences of limited rationality, social preferences, and lack of self-control, he has shown how these human traits systematically affect individual decisions as well as market outcomes,’ the jury’s statement said.

‘His empirical findings and theoretical insights have been instrumental in creating the new and rapidly expanding field of behavioural economics, which has had a profound impact on many areas of economic research and policy.’

Thaler told the Nobel committee by videoconference he was ‘pleased’ by the award.

‘Well, I was pleased. I no longer will have to call my colleague Eugene Fama ‘Professor Fama’ on the golf course,’ he joked, referring to his University of Chicago colleague who won the prize in 2013. 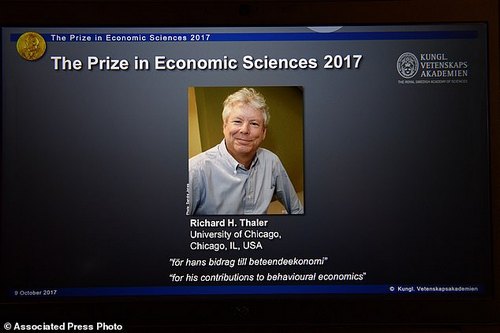 A screen shows the picture of economist Richard Thaler, who has won the 2017 Nobel Economics prize

‘I think the most important recognition is that economic agents are human, and economic models have to incorporate that,’ he said.

Thaler is a professor at the University of Chicago – a school popular with the Nobel economics committee. Of 79 laureates so far, more than a third have been affiliated with the university’s school of economics.

One of the founders of behavioural finance, which studies how cognitive limitations influence financial markets, Thaler developed a model for explaining how people tend to focus on the narrow impact rather than the overall effect of each decision they make, which is called limited rationality.

This includes the study of how people’s loathing of losses can explain why they value the same things more when they own them as opposed to when they don’t, which is called the endowment effect.

Influential in theoretical and experimental research on fairness, Thaler showed ‘how consumers’ fairness concerns may stop firms from raising prices in periods of high demand, but not in times of rising costs’, the Nobel economics committee said in a statement.

Along with his colleagues, Thaler created a tool called ‘the dictator game’ that was used in several studies to measure people’s attitudes to fairness from around the world.

And what about keeping New Year’s resolutions?

Thaler has shown that they can be hard to keep – no matter how much people wish to fulfil them.

Using a planner-doer model, Thaler showed how short-term temptations disrupt people’s plans to save for their old age, rainy days or live a healthier lifestyle.

‘In his applied work, Thaler demonstrated how nudging – a term he coined – may help people exercise better self-control when saving for a pension, as well in other contexts,’ the Nobel jury said.

Last year, the Nobel Economics Prize went to British-American economist Oliver Hart and Bengt Holmstrom of Finland for
their research on contract theory, which has helped design insurance policies and executive pay.

The economics prize is unique among the Nobel awards in that it was created by the Swedish central bank in 1968 – the others were all set up through the 1895 will of Swedish inventor and philanthropist Alfred Nobel.

Using social walls to give your brand an edge