An asteroid estimated to be up to 100 feet wide is set for a close shave with Earth this week, when it will soar past at a distance of just 27,000 miles above the surface – or, as some scientists have put it, ‘damn close.’

It first flitted past our planet in October 2012 at about double the distance of its next expected pass, before disappearing.

But, after tracking it down last month, scientists now assure it will make a safe pass. 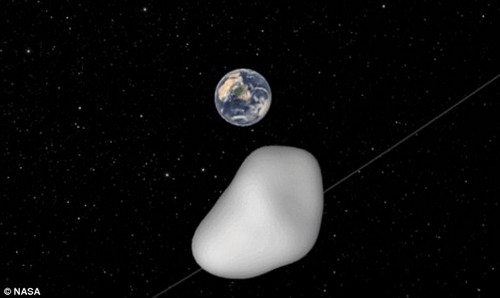 An asteroid estimated to be up to 100 feet wide is set for a close shave with Earth this week, when it will soar past at a distance of just 27,000 miles above the surface – or, as some scientists have put it, ‘damn close’

Nasa hopes to use its international network of observatories to recover, track and characterise asteroid 2012 TC4.

As it starts to approach Earth in the coming months, large telescopes will be used to detect it and establish the asteroid’s precise trajectory.

The new observations are expected to help refine knowledge about its orbit, narrowing the uncertainty about how far it will be from Earth at its closest approach in October.

With this close approach, Nasa will have the opportunity to test its network of observatories for its planetary defense system, in the event an asteroid did actually hit Earth.

‘Scientists have always appreciated knowing when an asteroid will make a close approach to and safely pass the Earth because they can make preparations to collect data to characterise and learn as much as possible about it,’ said Dr Michael Kelley, a scientist working on the Nasa TC4 observation campaign.

‘This time we are adding in another layer of effort, using this asteroid flyby to test the worldwide asteroid detection and tracking network, assessing our capability to work together in response to finding a potential real asteroid threat.’

They expected the asteroid to return for a near-Earth rendezvous this year, but did not know just how close it would come.

The latest observations, made on July 27, 31, and then again on August 5, revealed 2012 TC4 will pass within one eighth of the moon’s distance from the planet. 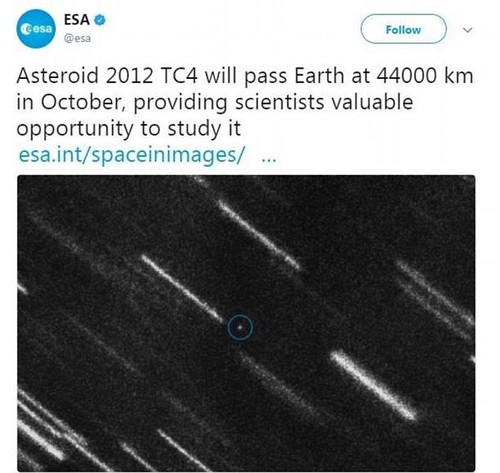 The asteroid, dubbed 2012 TC4, first flitted past our planet in October 2012 at about double the distance of its next expected pass, before disappearing.  In this tweet, the ESA announced they calculate it passing at a distance of around 44,000 kilometres (27,300 miles)

The asteroid was first discovered in 2012, when it sped past Earth, but it has been too distant and faint to see over the last five years.

On October 12, the asteroid is set to make a ‘close’ flyby of Earth.

Based on predictions made at the agency’s Center for Near-Earth Object Studies in Pasadena, California, it could also – and more likely will – pass much farther away, as far as 170,000 miles (270,000 kilometers).

According to Nasa’s Jet Propulsion Laboratory, the asteroid’s next ‘close-approach’ to Earth will take place on December 29, 2019 – although at a much further distance of more than 21 million miles (34 million kilometers).

That is far enough out to just miss our geostationary satellites, according to their calculations.

‘As close as it is right now, I think this prediction is pretty safe, meaning that it will miss.’

The asteroid was still very far from Earth, about 35 million miles (56 million km) at the time of the observations.

Although still certain that it will not hit the planet, Nasa scientists previously calculated that 2012 TC4 could pass as close as 4,200 miles (6,800 km).

If the asteroid did hit Earth, it could lead to a much more devastating level of impact than the 18
metre (59 foot) asteroid that hit the city of Chelyabinsk in Russia in 2013.

This animation depicts the flyby of asteroid 2012 TC4 as it passes under Earth on Oct. 12, 2017. While scientists can’t yet predict exactly how close it will approach, they know for certain it will come no closer than 4,200 miles (6,800 kilometers) from Earth. Credit: Nasa/JPL-Caltech 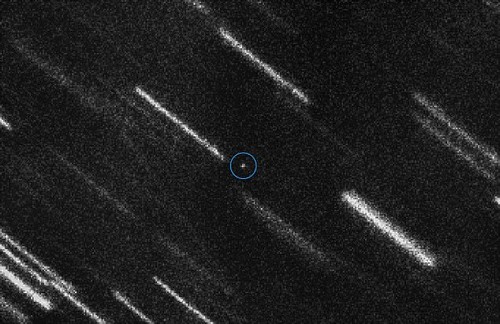 The asteroid the size of a house set to narrowly skim the Earth in October was spotted by scientists this summer for the first time in five years. ESA has tracked down the giant hunk of rock (circled) which is about 15 to 30 metres (49 to 98 feet) long

But Detleft Koschny, of the European Space Agency, said: ‘We know for sure there is no possibility for this object to hit the earth.’

According to Nasa’s Jet Propulsion Laboratory, the asteroid’s next ‘close-approach’ to Earth will take place on December 29, 2019 – although at a much further distance of more than 21 million miles (34 million km).

According to Nasa’s Jet Propulsion Laboratory , the asteroid’s next ‘close-approach’ to Earth will take place on December 29, 2019 – although at a much further distance of more than 21 million miles (34 million km)

If it were to make impact with Earth’s atmosphere, scientists predict the space rock would burn up before hitting the surface.

‘It is something to keep an eye on,’ Dr Judit Györgyey-Ries, an astronomer at the University of Texas’ McDonald Observatory, told Astrowatch. ‘We could see an airburst maybe broken windows, depending on where it hits.’

Researchers however, are still uncertain of the asteroid’s composition, which makes it difficult to predict what the effects of an impact on Earth would be.

A spokesperson for Nasa’s Jet Propulsion Laboratory told the DailyMail.com: ‘2012 TC4 was observed only briefly when it was discovered before it was too faint to see.

A meteor that blazed across southern Urals in February 2013 was the largest recorded meteor strike in more than a century.

More than 1,500 people were injured by the shock wave from the explosion, estimated to be as strong as 20 Hiroshima atomic bombs, as it landed near the city of Chelyabinsk. 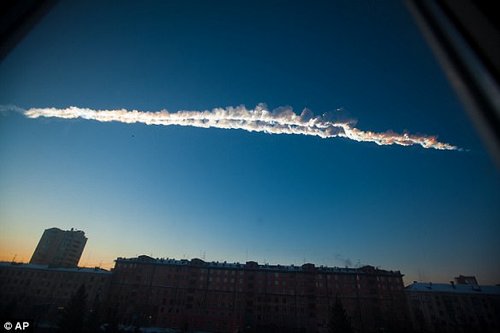 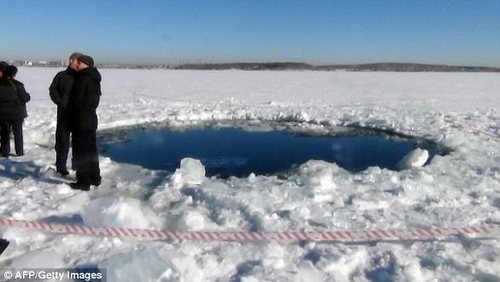 Officials can be seen standing next to a 20-foot (six-meter) hole in the ice of a frozen lake, thought to be the site of a meteor fall resulting from the space rock

The fireball measuring 18 meters across, screamed into Earth’s atmosphere at 41,600 mph. Much of the meteor landed in a local lake called Chebarkul.

Scientists have uncovered more than 12 pieces from Lake Chebarkul since the incident.

However, only five of them turned out being real meteorites.

‘The ongoing observation campaign and the data we collect during this flyby will provide more direct information on mineralogical composition, structure, size.

‘Physical properties of an asteroid (composition, structure, size) and its velocity relative to the Earth will influence the effects on an impact.

‘That is one of the reasons we perform follow-up observations – to determine those physical properties.’

Nasa hopes to use its international network of observatories to recover, track and characterize 2012 TC4.

‘This is the perfect target for such an exercise because while we know the orbit of 2012 TC4 well enough to be absolutely certain it will not impact Earth, we haven’t established its exact path just yet,’ said Paul Chodas, a manager working on the project.

< p class="mol-para-with-font">‘It will be incumbent upon the observatories to get a fix on the asteroid as it approaches, and work together to obtain follow-up observations than make more refined asteroid orbit determinations possible.’

Parents of teenage daughters are most likely to divorce