They are the cooking tips passed down the generations from mothers to their children.

But many of the golden rules of the kitchen are just plain wrong, from marinating meat for hours to keeping eggs in the fridge door.

Dr Stuart Farrimond, an expert on the science of food, states that marinating meat is pointless after two hours because the flavour will never penetrate more than a few millimetres deep.

Keeping eggs in the fridge door could ruin your meringues or fried eggs by shaking up their whites, he says, and olive oil will do nothing to stop pasta from sticking together.

The book states that unopened mussels are not uncooked, indicating only that the muscles of the molluscs are so strong their shells have stayed shut.

It also tackles the latest fashions such as trendy raw vegetable diets. It turns out that only some vegetables like broccoli are better for you raw, while others, like carrots and cabbage, are actually more nutritious after being cooked.

Dr Farrimond, whose book is called The Science of Cooking, said: ‘I wanted to bring science into the kitchen to make people realise you don’t have to be super-brainy, or Heston Blumenthal, to understand the chemical processes going on when you are cooking.

‘People accept the advice from recipe books, celebrity chefs or their mother unquestioningly, but there can be better ways to do things.’

One of the topics covered by Dr Farrimond is well-known to all fans of the Great British Bake-Off. 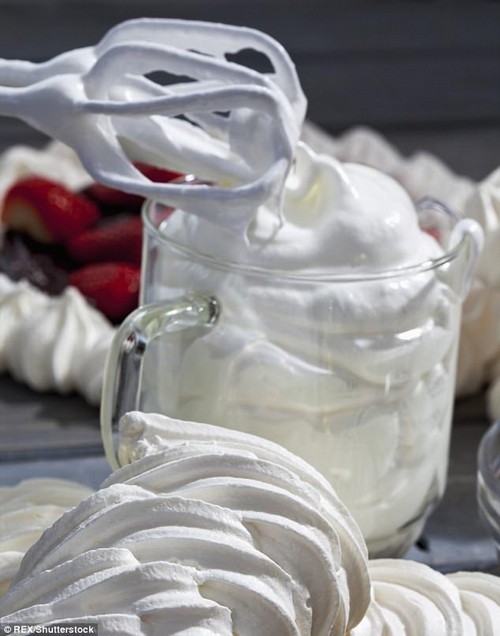 Dr Stuart Farrimond’s new book The Science of Cooking dishes out the truth about meringues, mussels and dispels many other culinary myths

He suggests the dreaded ‘soggy bottom’ at the base of a pie can be avoided by using a cheap metal or Pyrex oven dish rather than the more expensive ceramic ones in middle-class kitchens across the country.

These dishes may look more attractive but they conduct heat slowly, leading to limp pastry with a greasy coat from the slowly melted butter.

People marinate meat for hours but because meat is 75 per cent water, its muscle tissue cells are almost entirely saturated.

A marinade can only penetrate a few millimetres into the meat before drying on the surface.

Even worse, the acidic ingredients, like lemon juice, wine or vinegar, will slowly digest the outside of the meat, turning its texture mushy and unpleasant.

TRUTH: A marinade can only penetrate a few millimetres into the meat, so more than two hours is pointless.

MYTH: Eggs should be stored in the fridge door.

TRUTH: Poached and fried eggs should never come from the fridge, while storing eggs in the door shakes up their whites when it is opened.

TRUTH: Oil simply blobs on the surface, but stirring in the early stages works to separate pasta.

TRUTH: The meaty contents cook regardless of whether the shell opens, so mussels are always safe to eat. However those open before cooking should be thrown away.

TRUTH: Broccoli, garlic, onions and red peppers are more nutritious raw, but carrots, spinach, tomatoes and cabbage are better for you when cooked.

TRUTH: Metal or Pyrex is better to avoid ‘soggy-bottomed’ pies, as they heat up faster.

On the eternal argument of where best to store eggs, the expert advises against using the egg holder in a fridge door as opening and shutting it shakes the eggs, speeding the thinning of the whites.

When making a boiled egg, eggs can be either refrigerated or stored at room temperature, as they can for scrambled eggs.

However poached eggs are best kept at room temperature before preparation, as a cold egg reduces the water temperature, slowing cooking and making the whites more likely to turn stringy and spread.

Cakes and meringues should use eggs at room temperature, so that the proteins unwind and mesh together more easily for a slightly finer and more even crumb.

Raw vegetables, encouraged by advocates of ‘clean eating’, are also not necessarily best, based on the science.

Cooking has a mixed effect on nutrients, destroying the vitamins and antioxidants in some fresh produce, while increasing them in others.

Dr Farrimond said: ‘The idea that raw is best cannot be true because tomatoes are very high in the antioxidant lycopene, which is only really available to the body at significant levels when tomatoes are cooked.

‘The same is true for carrots, as the body has to work very hard to extract heart-protecting carotenoids when they are raw, but cooking makes it easier to access them.’

Mussel shells do not always open because these molluscs have some of the strongest muscles, called ‘adductors’, in the animal kingdom.

They weaken when cooked, but not always enough to open the shell – however the meat inside is still always cooked.

Finally, olive oi
l should not be added to a pan of pasta, as it will do little else but sit on the water.

The best way to stop pasta sticking is to add plenty of water keep stirring it in the first three or four minutes when starch on the pasta surface turns into a sticky gel.

The Science of Cooking provides advice on how to prepare meat and poultry, fish and seafood and eggs and dairy.

It follows an article in the New Scientist earlier this year which also debunked myths, telling people not to stir their risotto throughout cooking and that soaking an onion before chopping it is useless to protect the eyes. 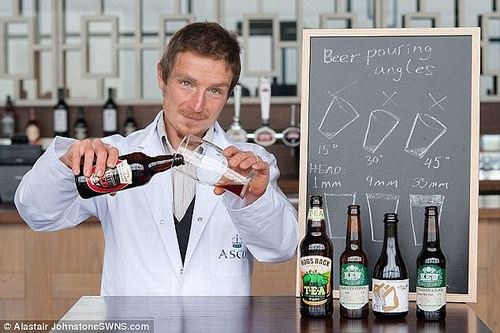 Dr Stuart Farrimond (pictures) reveals the truth behind meringues, mussels and pasta in his new offering The Science of Cooking

Black rhino to return to Chad after South Africa deal

Cybersecurity in healthcare: Growth forecast, challenges, and the way ahead