The book – The Paper Time Machine – shows Mrs Pankhurst being lifted up by Metropolitan Police Superintendent Rolfe for daring to try to present a petition calling for votes for women directly to King George V. As she was carted off to Holloway Prison in a police van, she yelled: ‘Arrested at the gates of the Palace! Tell the King!’

In a startling new book that brings black-and-white pictures vividly to life by carefully hand-colouring them, suffragette Emmeline Pankhurst is carted away from Buckingham Palace in May 1914.

With the outbreak of the Great War two months later, the campaign was abandoned to back the war effort, and women started to gain the vote from 1918. Mrs Pankhurst lived to see it, but Supt Rolfe died two weeks after this photograph. 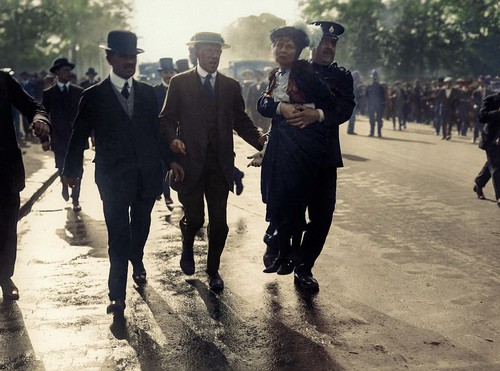 The Paper Time Machine shows how the inventor tested his vehicle, the Dynasphere, in 1932 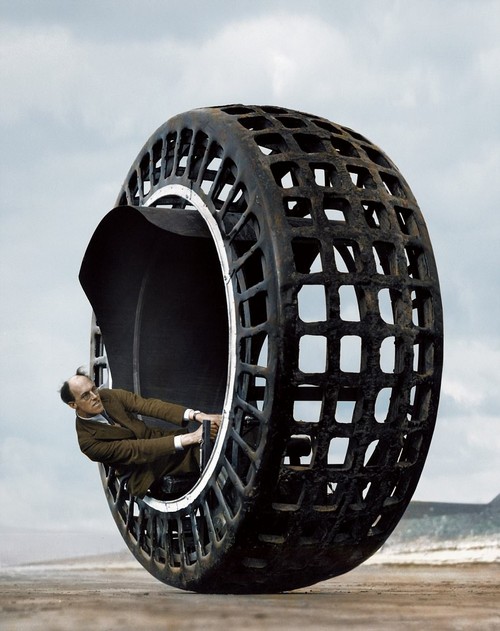 Eccentric inventor John Archibald Purves tests his Dynasphere at Weston-super-Mare in 1932. The seats and motor were inside the wheel, and you turned by, somewhat dangerously, leaning far out to one side or the other. Unsurprisingly, it never caught on. 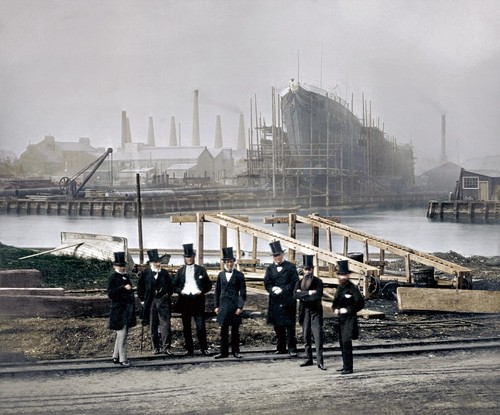 East London in 1865, when creating ships out of iron instead of wood was a novel concept

Top-hatted directors gather for the launch of the steamer Tanjore at Blackwall, East London, in 1865, for the Peninsular & Orient Steam Navigation Company (later known as P&O). Building ships out of iron, not wood, and without sails was seen by the public as a strange new idea.

A Zebra pictured trotting through Brixton in South London, in 1913, alongside the electric tram

Long before zebra crossings had been thought of, real zebra were sometimes used by showmen to promote events. This one, trotting happily through Brixton, South London, in 1913, belonged to music-hall artist Gustav Grais. A motor-car is in the background but they were still in the minority compared to horse-drawn vehicles and electric trams – from one of which a lady in an exotic hat is alighting on the left. Judging by the nonchalance with which the couple on the right are stepping out in front of a coach, traffic speeds were not high.

The steely interior of Tower Bridge in the capital, which was later covered in stone cladding

Tower Bridge in London as you’ve never seen it – half-built in 1899. As this reveals, it’s really a steel bridge – the stone we see today, here just visible at the base of the towers, is merely cladding. The Thames is a thriving waterway of tugs, ships, barges and lighters – which is why the bridge had to have lifting bascules. In the foreground a City gent is rowed across in a skiff. Soon he will be able to stroll over.

This train smashed through buffers and out onto the street. The moment is captured in colour in The Paper Time Machine

A train from Granville to Paris with failed brakes shot through the buffers, across the concourse and out onto the street at the terminus now known as Gare Montparnasse in 1885. Only one person was killed, a woman on the roadway.

Connected vehicles in India: A peek into the emerging trends and outlook for the future

Black rhino to return to Chad after South Africa deal

Amazon looking into ways to deliver packages to your car