In high-stakes sporting events such as the Olympics and World Cup, there’s immense pressure on teams to perform well. Given how high the expectations are, it’s crucial for sports managers to make the right decisions and ensure players are in their best form when on the field. It’s no wonder that leagues and franchises are turning towards innovative technologies to help them make better decisions during the game. One such emerging technology area is Electronic Performance and Tracking Systems (EPTS). 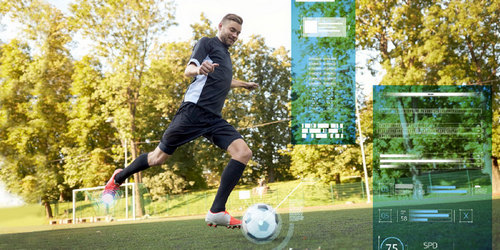 Wearable EPTS devices include measurement technologies such as a Global (GPS) or Local (LPS) Positioning System, accelerometer, gyroscope, and magnetometer to track and analyze player performance. In recent years, EPTS has gained significance, driven by the necessity to track match-play performance and help players put their best foot forward. It is little wonder then that the International Federation of Biosafety Association (IFBA), in 2015, approved the use of EPTS in the 2018 FIFA World Cup series to help players of all the 32 teams perform better.

EPTS provides player statistics, positional information, and video footages to coaches on mobile devices such as tablets. There are typically three groups analyzing this data on the field – the analyst sitting on the bench, the medical team, and the analyst in the stand.

Two optical cameras positioned on the main tribune collect data during matches, which is then supplied to the different groups. There are workstations dedicated to the groups where they can exchange key insights, for both the coaching staff and medical personnel. Optical tracking cameras located on the main tribune are used to closely monitor the players and the ball. EPTS device manufacturers typically pair the wearable with gyroscopes, accelerometers, and heart rate monitors to track player load and physiological data.

From 2018 World Cup onward, teams have been permitted to use EPTS during the game, enabling them to make decisions regarding tactical switches and substitutions. This is a huge leap from the earlier rule of allowing communication between coach and analyst only during halftime.

In addition to football, EPTS has found its way into several popular sports such as rugby, soccer, snowboarding, mountain biking, surfing, and kiteboarding. Football clubs such as Barcelona, Manchester City, and Seattle Sounders, are already experimenting with various EPTS devices.

A majority of sports-tech investments are currently focused on improving audience engagement, the way teams are managed, and team and player performance primarily through analytics and digitization.

Beyond the World Cup, associations are partnering with sports tech firms to leverage wearable technology for their players. The US Soccer Federation, as an example, has hired a leading sports analytics company to monitor all its four million registered soccer players using athlete monitoring devices.

Clearly, sports-tech is becoming an integral part of football and other professional sports worldwide, disrupting everyone in sports value chain. Everyone, from individual players, teams, and, broadcasters to sports equipment manufacturers, content providers, and fans, is experiencing the effects of this rapidly-evolving market. Being aware of the rapid changes and responding effectively to the threats and opportunities it poses is key for businesses to stay in the game.

IPL 2018 social media insights: Can DD beat RR to stay in the game?