Fall is always a good time to create new habits, and coffee chains know it.

These days, they are desperately trying to find any excuse to get you to drink their java.

Many chains used National or International Coffee Day, just passed, as a reason to offer their coffee at a discount, or even for free – with some conditions, of course.

A combination of effects, resulting from higher temperatures and shifting rainfall patterns, will make the land where coffee is currently grown unsuitable for its production

COFFEE REDUCES THE RISK OF DEATH

An August 2017 study by researcher at Imperial College London found that drinking coffee reduces the risk of death from all causes.

Researchers analyzed data from more than half a million people across 10 European countries to explore the effect of drinking coffee on risk of mortality.

The researchers analyzed data from 521,330 people from over the age of 35, and their diets were assessed using questionnaires and interviews, with the highest level of coffee consumption reported in Denmark.

Those who drank more coffee were also more likely to be younger, to be smokers, drinkers, eat more meat and less fruit and veg.

After 16 years of follow up, almost 42,000 people in the study had died from a range of conditions including cancer, circulatory diseases, heart failure and stroke.

Following adjustments from lifestyle factors such as diet and smoking, the researchers found that the group with the highest coffee consumption have a lower risk for all-causes of death, compared to those who did not drink coffee.

For restaurant operators, there’s no better hook than coffee to get repeat business. It’s a great scheme that seems to be working for some.

Given what’s looming on the horizon, however, offering free coffee may no longer be an option for businesses.

Coffee demand around the world is shifting.

Europe still accounts for almost one third of the coffee consumed worldwide, but China has doubled its consumption in just the last five years.

As for Canada, numbers remain robust as more than 90 per cent of adult Canadians drink coffee.

Several recent studies suggest coffee is a healthy choice, possibly one factor in the rise in coffee drinkers.

Either way, demand is strong in most Western countries, which puts more pressure on coffee-producing countries.

Coffee grown in more than 60 countries

Coffee is the most traded commodity in the world after oil.

Coffee beans are grown in more than 60 countries and allow 25 million families worldwide to make a living.

Brazil is by far the largest producer, followed by Vietnam and Colombia.

Globally, 2017 could be a record year, as the world will likely produce well over 153 million 60-kilogram bags of coffee.

Coffee futures are down as a result, but we are far from seeing a bumper crop.

Production has been modestly shifting over the past few years. 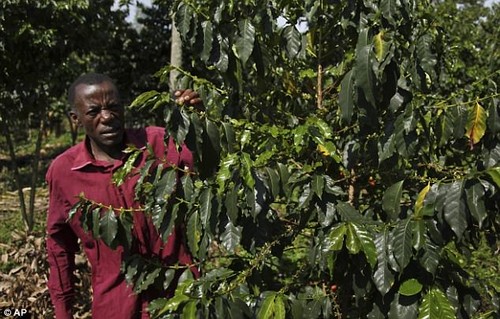 In this photo taken October 21, 2015, coffee farmer Luka Kinyere inspects his plants in Kasese, in the foothills of the Rwenzori Mountains near the border with Congo, in western Uganda. Here coffee is the lifeblood of many families but their success is threatened by climate change

With good rainfalls in Brazil and favourable weather patterns in other regions of the world, Mother Nature has so far spared coffee growers, but their luck may be running out.

Despite not being a staple in any diet, coffee is big business.

At the farm gate, coffee is worth over US$100 billion. In the retail sector, the coffee industry is worth US$10 billion.

But there is growing consensus among experts that climate change will severely affect coffee crops over the next 80 years.

By 2100, more than 50 per cent of the land used to grow coffee will no longer be arable.

Ethiopia could be profoundly affected

A combination of effects, resulting from higher temperatures and shifting rainfall patterns, will make the land where coffee is currently grown unsuitable for its production.

According to the National Academy of Science, in Latin America alone, more than 90 per cent of the land used for coffee production could suffer this fate.

It’s estimated that Ethiopia, the sixth largest producer in the world, could lose over 60 per cent of its production by 2050. That’s only a generation from now.

As climate conditions become critical, the livelihoods of millions of farmers are at risk and production capacity is jeopardized.

Other potential contributors to this predicted downfall are pests and diseases.

With climate change, pest management and disease control are serious issues for
farmers who cannot afford to protect their crops. 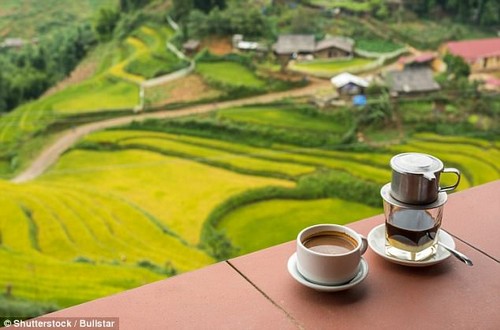 Coffee beans farming allows 25 million families worldwide to make a living. Brazil is by far the largest producer, followed by Vietnam and Colombia. But by 2100, more than 50% of the land used to grow coffee will no longer be arable. Pictured is drip black coffee vietnamese style

More than 80 per cent of coffee growers are peasant farmers.

Pests and diseases will migrate to regions where temperatures are adequate for survival, and most farmers won’t be ready.

Many will simply choose to grow other crops less vulnerable to climate change.

Others may attempt to increase their coffee production, but the quality will almost certainly be compromised.

Higher temperatures will affect the quality of coffee.

Higher-quality coffee is grown in specific regions of the world where the climate allows the beans to ripen at just the right time.

Arabica coffee, for example, which represents 75 per cent of world coffee production, is always just a few degrees away from becoming a sub-par product.

This will undoubtedly affect coffee prices and quality for us all.

Thanks to the so-called Starbucks Effect, the quality of the coffee we now enjoy is far superior to that of just a decade ago.

Good beans may become more difficult to procure in the future.

Right now, coffee futures are valued at US$1.28 per pound and are being exposed to downward pressures.

Higher temperatures will affect the quality of coffee. Higher-quality coffee is grown in specific regions of the world where the climate allows the beans to ripen at just the right time. Pictured is an indigenous Latin American woman harvesting ripe coffee berries on organic coffee farm

The coffee wars we are seeing are not just about gaining market shares and getting consumers hooked on java.

They are also about how we connect with a crop that is under siege by climate change.

Short of fighting climate change, we could be forced to alter our relationship with coffee.

As current coffee-producing countries attempt to develop eco-friendly methods and embrace sustainable practices, Canada could be the next country where coffee is actually grown, not just roasted.

Within the next decade, with climate change and new technologies, perhaps producing coffee beans will be feasible in Canada.

After all, if Elon Musk thinks we can start colonizing Mars by 2022, why can’t we grow coffee in Canada?

So if a coffee chain is offering free coffee, take it.

It won’t be long before coffee could become a luxury.

In this photo taken October 21, 2015, Alice Sanyu, a production adviser with the local government who tours plantations in several villages teaching smallholder farmers how to adapt to climate change, inspects coffee beans in Kasese, in western Uganda

Blockchain applications beyond the banking domain