Two of Earth’s five mass extinction events – times when more than half of the world’s species died – resulted in the survival of a low number of ‘weedy species’, new research has found.

These so-called weedy species spread around the world as Earth recovered from these dramatic mass extinctions, which involved suspected volcanic eruptions.

Researchers say their findings are significant because they could shed light on modern high extinction rates and how biological communities may change in the future.

The mass extinction at the end of the Permian (252 million years ago) was the largest in Earth’s history. Following this, one of the most common animals at the time was Lystrosaurus, an early relative of mammals whose fossils are known from Russia, China, India, Africa and Antarctica

The study, conducted by researchers at North Carolina State University and the North Carolina Museum of Natural Sciences, involved examining fossil records of almost 900 vertebrate species dating back between 260 and 175 million years ago – from the late Permian through the Triassic and early Jurassic periods.

During this time, two mass extinctions events occurred, and Dr David Button, the lead author of the study, said that similar patterns arising after two mass extinctions implies that other extinction events may have the same results – including the current biodiversity loss that is being seen today.

‘Mass extinctions not only reduced animal diversity, but also affected the distribution of animals and ecosystems, or biogeography,’ Dr Button said.

‘As species are removed by extinction, their ecological niches are left vacant. Following the extinction event, these niches are occupied by surviving and newly evolving “weedy” species.

‘These few generalists spread out and dominated for a time, leading to a low-diversity global “disaster fauna.”‘

The late-Permian extinction event caused about 90% of sea life and 70% of land-living vertebrates to become extinct, probably as a result of climate change from hyperactive volcanism – when volcanoes spewed basalt lava and released gases into the atmosphere

According to the researchers, one of these generalist species was the Lystrosaurus, a plant-eating, early mammal relative that had tusks to help it dig up plants, and ranged from dog- to pig-sized.

The late-Permian extinction event, which took place about 252 million years ago, allowed new groups of animals to evolve, including the earliest dinosaurs, crocodiles and relatives of mammals and lizards.

The late-Triassic extinction event, which occurred around 201 million years ago, wiped out many major groups, setting the stage for dinosaurs to take over.

‘The late-Permian event caused about 90 per cent of sea life and 70 percent of land-living vertebrates to become extinct, probably as a result of climate change from hyperactive volcanism – when volcanoes spewed basalt lava and released gases into the atmosphere causing large increases in carbon dioxide and severe warming resulting in desertification,’ Dr Button said.

Ordovician-Silurian extinction
The first of the big five extinction events took place around 540 million years ago was the second biggest extinction event of marine life. There was only life in the seas at this time and more than one hundred families of marine invertebrates died.

About 375 million years ago, major environmental changes caused a drawn-out extinction event that wiped out 70% of marine species

Permian-Triassic extinction (the Great Dying)
The largest extinction event and the one that affected the Earth’s ecology most profoundly took place 251 million years ago. As much as 90-95% went extinct, and it took about 50 million years for life on land to fully recover its biodiversity – with the rise of many species of dinosaurs.

Triassic-Jurassic extinction
Dinosaurs first appeared in the Early Triassic, but large amphibians and mammal-like reptiles were the dominant land animals. The rapid mass extinction that occurred 205 million wiped out about 20% of all marine families, many reptiles and the last of the large amphibians – opening up niches for the dinosaurs of the Jurassic.

Many researchers believe that an asteroid slammed down on Earth 65-66 million years ago at Chicxulub, Mexico. The impact is often blamed for ending the reign of the dinosaurs. It took 10 million years for biodiversity to recover from this mass extinction. 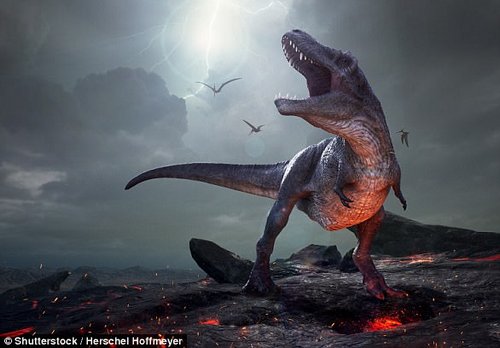 Many researchers believe that an asteroid slammed down on Earth 65-66 million years ago at Chicxulub, Mexico. The impact is often blamed for ending the reign of the dinosaurs. It took 10 million years for biodiversity to recover from this mass extinction

‘The late-Triassic event is also associated with volcanism.’

‘Mass extinctions were global disasters that fundamentally reshaped ecosystems,’ said Dr Richard Butler, professor of palaeobiology at the University of Birmingham and a co-author of the study.

‘The fossil record has the potential to test evolutionary hypotheses in long time spans, which is not possible if evolutionary research is limited to living plant and animals,’ said Dr Martín Ezcurra, a researcher at the Museo Argentino de Ciencias Naturales who co-authored the paper.

‘Further understanding of these ancient crises will help to inform conservation efforts to prevent modern animals from suffering a similar fate,’ he says.

Did ancient oceans on Mars play host to alien life?