NASA astronauts took another spacewalk outside the International Space Station on Tuesday, this time to grease the robot arm’s new hand.

Commander Randy Bresnik ventured out for the second time in less than a week, along with Mark Vande Hei.

The pair replaced the latching mechanism on one end of the 58-foot robot arm last Thursday. The mechanism malfunctioned in August.

NASA astronauts took another spacewalk outside the International Space Station on Tuesday, this time to grease the robot arm’s new hand. Commander Randy Bresnik ventured out for the second time in less than a week, along with Mark Vande Hei

NASA AND RUSSIA TO BUILD MOON BASE

The Deep Space Gateway will orbit Earth and the moon and will open up opportunities for future exploration of deep space, as well as a return to the moon and missions to Mars.

The first modules of the station will be completed as soon as 2024 with construction starting in 2022.

Similar to the International Space Station, this new space station will be open to to astronauts and cosmonauts globally.

It could provide a staging point for the proposed Deep Space Transport vessel, which is designed to send astronauts and cosmonauts around the solar system.

China and India as well as other members of the BRICS Nations (Brazil, Russia, India, China and South Africa) may join.

The two-part lube job is expected to spill into next week, in a third spacewalk.

These latches, or hands, are located on each end of the Canadian-built robot arm.

They’re used to grab arriving U.S. cargo ships and also allow the robot arm to move around the orbiting lab.

Launched in 2001 with the rest of the robot arm, the original latches were showing their age.

NASA plans to replace the latching mechanism on the opposite end of the arm early next year.

‘I have a little bit of adrenaline going on right now,’ Vande Hei said as he got to work more than 250 miles above Rio de Janeiro.

‘That view is amazing.’

As the space station approached Italy, Mission Control urged the spacewalkers to take some photos for their crewmate, Paolo Nespoli.

Commander Randy Bresnik and Mark Vande Hei tackled the job on the first of the three NASA spacewalks planned over the next two weeks.

The latching mechanism on one end of the 58-foot robot arm malfunctioned in August.

It needs to be replaced before an Orbital ATK supply ship launches in November.

Within an hour-and-a-half, the spacewalkers had unbolted the degraded mechanism from the arm and turned their attention to the replacement part. 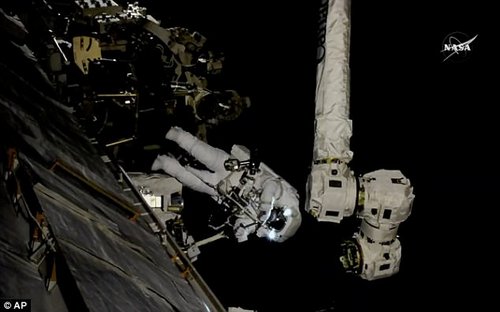 This bundle of latches – more than three feet (a meter) long – is used to grab visiting spacecraft, and provides power and data.

The arm can also move like an inchworm across the space station by grabbing onto special fixtures.

The Canadian-built arm has been in orbit for 16 years.

Engineers attribute the recent trouble to wear and tear.

The two latching mechanisms, one on each end of the arm, have been used nearly 400 times.

The latching mechanism on the opposite end will be replaced early next year.

Thursday’s excursion was the first spacewalk for Vande Hei, a rookie astronaut who arrived at the orbiting outpost a few weeks ago.