Thanks to social media, it’s easy to gauge the popular sentiment around key events such as gaming tournaments. Social media analytics can provide tremendous insight into player and team favorability and reveal the potential winner before the match has even started!

Social media is constantly buzzing with fan predictions and commentary about matches, players and their teams. The outcome of today’s IPL match is going to be tough to predict – after all, you have two of the best teams battling it out on the field. To find out, we analyzed the social media signals around the Sunrisers Hyderabad vs. Kings XI Punjab match that will be played on April 26, 2018, in Hyderabad.

First off, a quick recap of what has happened so far.

Let’s consider what they can use against Kings XI Punjab. First is the lineup of top bowling contenders – Billy Stanlake and Bhuvneshwar Kumar. Shakib Al Hasan and Rashid Khan have also shown exemplary skill as spinners and are expected to take the highest number of wickets. 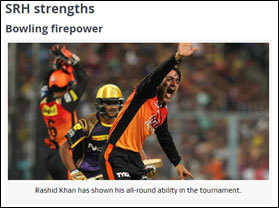 Let’s not forget the batsmen like team-skipper Kane Williamson, Manish Pandey, Shikhar Dhawan and Wriddhiman Saha. These key players are most likely to lead their team to victory.

Kings XI Punjab has players like Karun Nair, Chris Gayle, and KL Rahul, who have helped their team win matches in the past. They have a consistent number of wins over the last few matches. 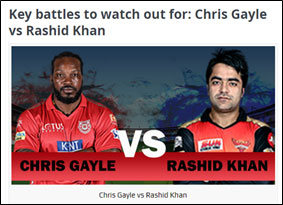 What does social media data say?

As you’d expect, a majority of Facebook and Twitter users are placing their bets on Sunrisers Hyderabad. The reason being better bowlers and batsmen and the fact that the team is playing in their hometown.

This prediction is supported by the social media visibility index, too, with 51% of online conversations surrounding Sunrisers Hyderabad. Half of the blog authors on the internet are talking about SRH and the other about KXIP. 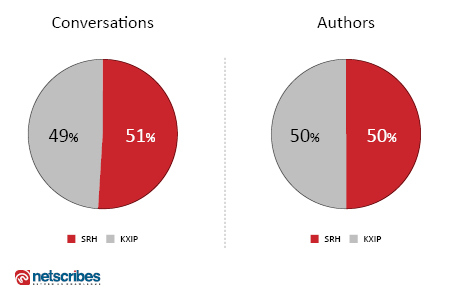 There’s a 50- 50% call on the favorability index, where the fans have faith that their team will win. There is only a 2% difference in the affinity index, with the Sunrisers Hyderabad taking the lead at 16%.

Across the web, there is a close call between the affinity and trust indexes, as well. There’s greater buzz for the Kings XI Punjab over on Facebook, while Sunrisers Hyderabad takes the lead on Twitter.

When analyzing the comments, we see a majority of posts lauding Sunrisers Hyderabad players Shakib Al Hasan and Rashid Khan. It looks as though they are relying on these players to win the upcoming match. Khan’s improvement after bad performances in the last few matches has been warmly welcomed and fans seem to have high hopes for this upcoming match.

Social media data shows that fans expect Chris Gayle and Rashid Khan to be the possible winners of the IPL title. Looks like fans are hoping to see an intense playoff between these players. 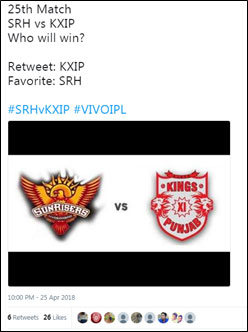 This report is developed in partnership with Talkwalker.