So here it is! It’s only two days before we get to know who will be crowned the 11th Indian Premier League champion. From the eight teams that challenged for supremacy, we are down to the final three teams. The journey from here to the podium is not going to be easy.

The teams in question: CSK, KKR, and SRH are evenly matched on all fronts. The three teams have had their fair share of ups and downs on their road to the playoffs. However, all the three teams have been IPL champions before and know what it is required in the final push for glory. The race among the three teams to being the IPL champion is heating up and so is the intensity with which their respective fans are fighting it out on social media.

Among the three teams, Chennai Super Kings (CSK) holds a slight edge, as they have already qualified for the finals in Mumbai. Thanks to their stupendous victory against SRH in Qualifier 1, the #whistlepodu gang will be properly rested and rejuvenated before the final match on Sunday. CSK has displayed a superlative IPL performance this year, led superbly by “captain cool” MS Dhoni. The batting form of Ambati Rayudu, as well as the captain, have held CSK in good stead throughout the competition. The bowling department of CSK boasts a good mix of youth and experience. Historically, CSK has been the most consistent team in IPL, reaching the play-off stages nine times and playing the final 6 times. They also have the highest win percentage (60.68), having won the competition twice. So there are a lot of factors that make the CSK fans believe that they can go all the way this time.

Sunrisers Hyderabad (SRH), on the other hand, will be kicking themselves for not getting into the final despite being in a very strong position against CSK in Qualifier 1. The loss against CSK in Qualifier 1 meant that SRH has lost four matches on the trot. This is absolutely unthinkable given their tremendous showing in the early stages of the competition. SRH’s current form is a thing of concern for the captain and the team management. However, backed by the form of captain Kane Williamson and boasting of, perhaps, the best bowling line up in this year’s IPL, SRH will be looking forward to bounce back against KKR in Qualifier 2. Following their tremendous performance in the group stages, SRH was considered as a strong contender for lifting the IPL this time around. But their lacklustre showing in the latter stages is actually concerning for fans.

The third team competing for the glory is Kolkata Knight Riders (KKR), a franchise which is, also like CSK, one of the consistent teams in the IPL history. They, too, have won the IPL twice and are very strong at their home turf, Eden Gardens (a potential leverage when playing against SRH in Qualifier 2). However, the journey to the play-offs has not been smooth for the Shahrukh Khan-owned franchise. They have been outstanding in some matches and utterly dismal in some. Their chances of qualifying for the play-offs were almost jeopardised by a 102-run loss to Mumbai Indians (MI). However, the team showed a strong character and turned around their campaign by winning four games on the bounce, including the Eliminator against RR. Compared to SRH, the KKR camp is exuberant. They’ve managed to “peak at the right time” and will look to carrying this momentum on for the next two matches.

Based on the social media measurement metrics, such as visibility, favourability, and affinity, CSK and KKR beat SRH hands down with respect to support on social media.  The positive sentiment for these two teams are also higher, thanks to their scintillating performances in the play-offs so far. CSK’s gritty victory against SRH and KKR’s triumph over RR seems to have gone down well with their respective fans. 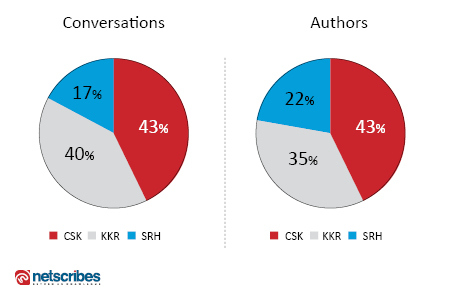 As per the visibility index, CSK leads both KKR and SRH in terms of social media conversations and number of unique authors. The presence of stalwarts like MS Dhoni, Suresh Raina, and the superb form of Ambati Rayudu with the bat has left fans gushing with positive reactions and conversations on social media.

However, the favorability index and trust index tells us a different story altogether. KKR has emerged as a clear fan favourite and the most trusted team according to these metrics. Also, when comparing fan sentiments on different social channels, KKR fans edge out CSK and SRH fans on Twitter in terms of voicing their support for their favourite team. But on Facebook, the rivalry between the KKR and CSK fans is intense. Both teams enjoy equal popularity. KKR has been on a roll, winning four matches on the trot, and their fans genuinely feel that this is their year to bring back the coveted IPL trophy to the Eden Gardens.

Based on current form and social media sentiments, CSK is positioned as the most likely contender for winning the 11th edition of the IPL. CSK has greater experience in playing in the final stages of the IPL. The team itself boasts of multiple IPL winners, such as Suresh Raina, Ravindra Jadeja, Harbhajan Singh, and the indomitable MS Dhoni. MS Dhoni comprehensively beats his opponents, Kane Williamson and Dinesh Karthik, with respect to winning past IPL matches. Social media fans of CSK realize this and literally have high hopes from their hero.

Published in partnership with Talkwalker.

How to Keep an Ocean Sunfish Clean

A Nobel prize for medicine for the understanding of body clocks