The official count gave Morales 47.08 percent of the vote and a 10.56 point lead over his closest rival Carlos Mesa – just enough to avoid a second-round runoff.

He was officially declared the winner on Friday, but the leadup to the final vote count was marked by delays and protests.

A few hours after Sunday’s election, publication of the preliminary count by the Supreme Electoral Tribunal (TSE) was abruptly halted. When it resumed a day later it showed Morales with a bigger lead, sparking widespread accusations of vote tampering and street protests.

Confidence in the voting process plummeted further when Antonio Costas, then-vice president of the TSE, resigned. Although he insisted he considered the electoral tally honest, he said he felt Sunday’s suspension of the vote count, which he had not approved, discredited the electoral process.

Kath Ledebur of the Cochabamba-based research centre, the Andean Information Network, said that accusations of a rigged vote began simmering months before the election, creating an “expectation of fraud going into the elections”.

“That assumption was only worsened by the TSE’s lack of transparency and failure to realise how their actions were impacting public opinion,” Ledebur told Al Jazeera.

This reflected the deep mistrust between the political rivals and the government, as well as a large part of the country’s discomfort with Morales’s grip on power.

“We are on a path that will take us to dictatorship,” Felipe Martinez, a demonstrator told Al Jazeera. “The election was fraudulent from beginning to end.” 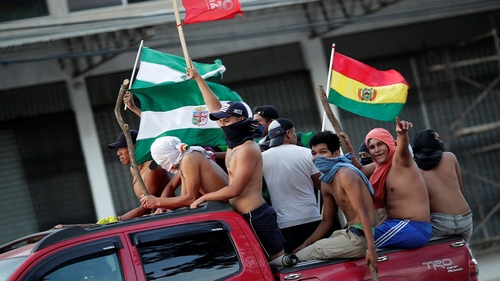 Demonstrations, now in their sixth day, have erupted in nine cities across the country, with protesters clashing with police and setting fire to voting stations.

Morales’s supporters have also rallied in large numbers in La Paz and Cochabamba.

“We will never abandon Evo because he is one of us,” said 60-year old Rosa Fernandez at a rally that filled La Paz’s largest square. “He has done so much for the poor people in this country.”

The Organization of American States (OAS) observer mission identified four issues that cast doubt on the fairness of the elections, in addition to the unanswered questions about the counting process.

Morales has denied intervening in the vote and accused his rivals of being a part of a right-wing conspiracy to oust him.

Foreign Minister Diego Pary Rodriguez welcomed an audit by the OAS, which said its conclusions must be legally binding.

“We have nothing to hide,” Maria Eugenia Choque, president of the TSE, said in a news conference.

“How can we be accused of fraud? We have been inspected by the OAS, and they approved our process.”

The United States, Brazil, Argentina and Colombia, who also urged a runoff vote, warned that they would not recognise the results of an election that did not reflect “the will of the Bolivian people”. 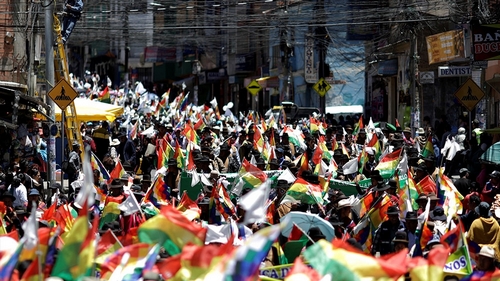 ‘Half the population against him’

Morales, Bolivia’s first left-wing indigenous leader, will formally begin his fourth consecutive term in January, which would end in 2025, for a total of 19 years in office.

“Whether Evo will actually be able to govern going forward, depends a lot on how the current protests are resolved,” said analyst Fernando Molina.

“But even if the tension drops, he will have half the population against him,” Molina told Al Jazeera.

Morales, 59, became president in 2006, ushering in unprecedented economic and political stability in the landlocked Andean country of 11 million. He won in landslide victories in 2009 and 2014 but his decision to run for a fourth term has riled some voters in this country with a long history of authoritarian rule. He refused to accept the results of a 2016 referendum which ruled against his proposal to extend term limits. He took his case to the country’s highest court arguing that term limits violated his human rights. The court, considered by critics as friendly to the president, ruled in his favour.

His Movement for Socialism party lost the absolute majority in the House of Deputies on Sunday, and while preserving its advantage in the Senate by just one seat, he may find it hard to pass legislation.

But analysts also point to the lack of unity and organisation among the opposition and question whether it will be able to mount a meaningful challenge to Morales.

“Our current priority is to continue in our campaign to demand a runoff,” said newly-elected deputy Miguel Roca from the Citizen’s Community.

Mesa has urged his supporters to keep up their protests and blamed the unrest on Morales.