Joe Calzaghe knew what he was getting into. Chris Eubank, the gnarled gladiator with an iron chin, had been to hell and back with Michael Watson and Nigel Benn.

Calzaghe had less than a fortnight to prepare for his first world title fight after Steve Collins’ sudden retirement.

At 31, Eubank was past his prime, but gave Calzaghe a warning ahead of their thrilling fight which took place 20 years ago on Wednesday in Sheffield. 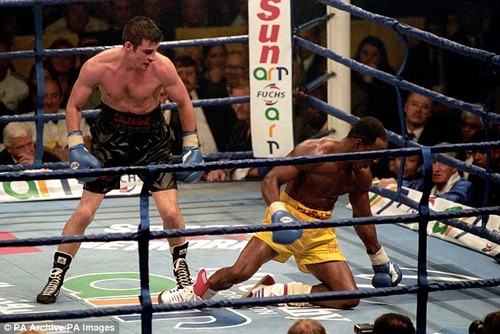 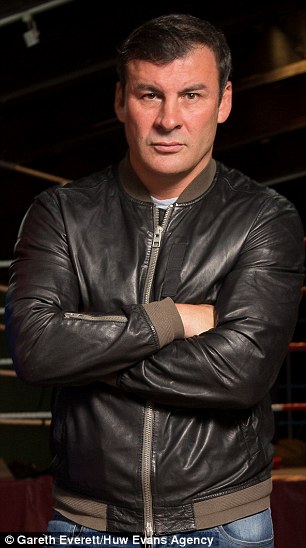 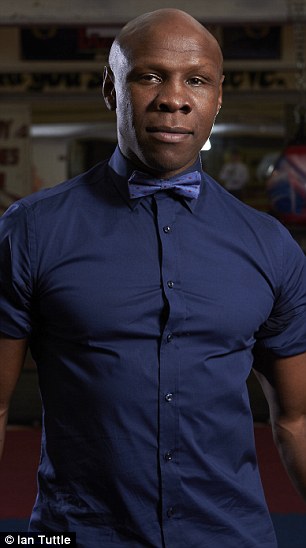 20 years on, the two fighters recalled their epic battle in Sheffield to Sportsmail’s Peter Carline 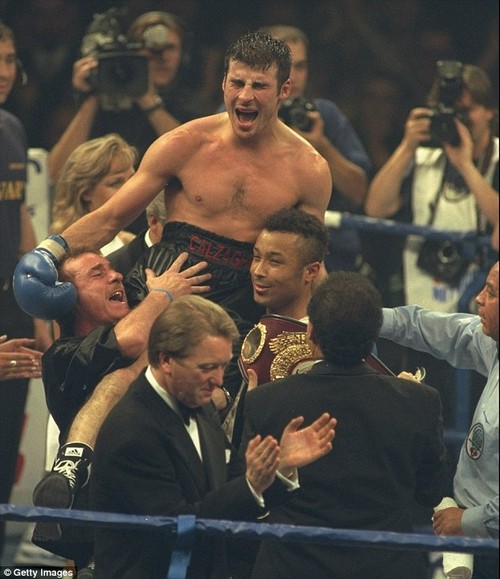 Calzaghe won every one of his 46 career contents but still claims: ‘No fight was as hard as that’

‘When we had our press conference, he turns up on his Harley, I’m thinking, “Wow. It’s Chris Eubank!” like a fan. I’ve come in on the train from Wales,’ recalled Calzaghe.

After losing to Collins twice in 1995, Eubank briefly retired. But the chance to pick up his old super-middleweight belt against Calzaghe was too good to pass up.

‘I was always in the gym, that was my way of life. So I was always prepared. And I was ready for Calzaghe,’ said Eubank, speaking to Sportsmail after guiding his son Chris Eubank Jnr to victory last weekend. 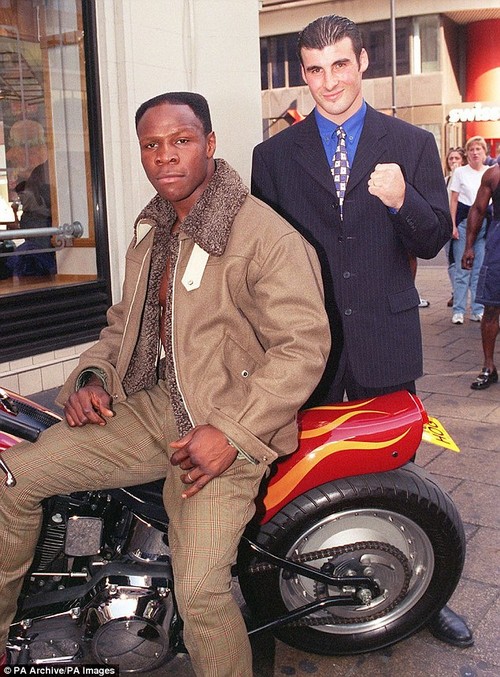 Eubank turned up to a press conference on his Harley-Davidson, while Calzaghe took the train 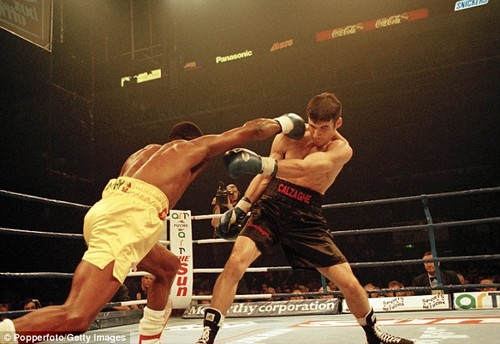 The fight was badly delayed – it was on the same card as Prince Naseem Hamed’s bout with Jose Badillo – and during the wait, football fan Calzaghe saw England draw 0-0 with his beloved Italy to qualify for the 1998 World Cup.

There were questions to be answered about Calzaghe, then 25. Did he slap rather than punch? Was his record (21 KOs in 22 wins) an indicator of average opponents? Could he go the distance? It took 15 seconds to answer the first.

‘I catch him with a sweet left hook and remember him not just falling, he flew across the ring into the corner. Stands up, nods to me, I’ll never forget it,’ grinned Calzaghe, still fit as a flea and pounding the punchbag when Sportsmail visits his South Wales boxing club. 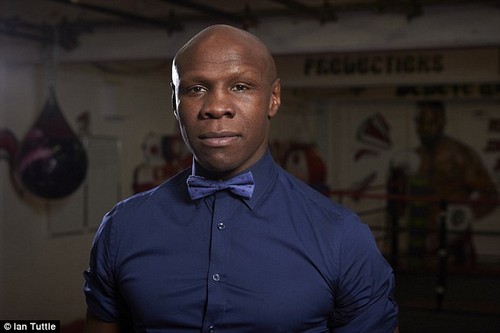 As ever, in Calazaghe’s corner that night in Sheffield was father, trainer and best friend Enzo (R)

EUBANK recalled: ‘I didn’t get dropped on the seat of my pants – I got dropped on my back, on my shoulders, that’s how hard the shot was.’

It was only the fifth time he had been knocked down in 50 fights. He took a mandatory count and stood up, smiling. The onslaught continued.

‘I threw everything at him,’ continued Calzaghe. ‘I did a few Ali shuffles, the lot. I put all 12 rounds in that first round. Trying to knock him out with every punch and he hung on. Third round I started to get tired.’

Eubank was feeling the pace, too. ‘I saw his hand speed and thought I’d be able to deal with that. Well, four punches to my one, you can’t deal with it. I was prepared but I couldn’t deal with his punch ratio,’ he explained.

‘This guy’s for real, I’ve got him on top of me and I’m not going to see any light – but I may see light in the 11th or 12th round. That’s where I know I can go. And I didn’t know whether he could go in the trenches.’

After being floored in the first round, the 31-year-old vowed to take Calzaghe to the trenches

‘I was prepared but I couldn’t deal with his punch ratio,’ the former world champion recalled

Calzaghe had never been beyond the eighth, but as he headed into uncharted territory, he was guided by a master in his corner in the shape of father, trainer and best friend Enzo.

Three days later I couldn’t get out of bed – but it was worth it to beat him ‘By the sixth round I was exhausted. I realised I wasn’t going to knock him out. He wasn’t going anywhere,’ said Calzaghe.

‘It’s a dark, lonely place. That night was one of the loneliest times. Dad is a great motivator. “Come on, what are you doing?”, he gives me a couple of slaps, but I’m thinking “f****** hell it’s only halfway”. I knew I was winning, but because it was Eubank I knew it was going 12 rounds. He’s very clever. He’s got a low centre of gravity and crouches down. It’s difficult to catch him. In the first round he popped his head up and that’s why he caught that sweet left hook. But he didn’t really put his head in the air after that!

Eubank, who now guides his son Chris Jnr, withstood the early onslaught of his younger foe

‘It’s a dark, lonely place. That night was one of the loneliest times,’ the Welshman admitted

‘It’s difficult when you’re taller, so I would throw combinations to catch him. When he throws a right hand he’s got a long reach and he falls in with it. So if he misses he’s in a clinch and he uses his strength to wear you out, because he is strong on the inside.

‘He knew he couldn’t outbox me the full distance, so he needed to come inside and rough me up a bit and try to catch me with big shots. I kept hanging in there.’

Calzaghe was indebted to the hours spent in Newbridge Boxing Club and on the nearby hills.

‘I think it was the ninth round I got my second wind and Dad was saying, “Come on, we’re nearly there!” I started thinking about those sprints up the hills. All the rounds I’d done in the gym.’

Calzaghe knocked Eubank down again in the 10th and despite being comfortably ahead, was still toe-to-toe in the last.

Calzaghe was awarded a unanimous decision. ‘He was a genuinely great fighter,’ said Eubank

‘Two or three days after, I couldn’t even get out of bed. But it was worth it,’ the Welshman said

‘I remember in the 12th doing something stupid,’ he added. ‘I was still attacking, looking to knock the guy out instead of just cruising. I’m still going for him and he catches me with a couple of good right hands. I was relieved to hear the final bell. I felt I’d won, but I’ve never been so exhausted.’

‘I thought that if he wasn’t a real fighter, if he wasn’t a warrior of genuine calibre, I would find him out in the 11th or 12th,’ said Eubank. ‘And he held on. He won a unanimous decision. And very well deserved. He was a genuinely great fighter. He had the speed and had a good boxing brain.’

Calzaghe added: ‘Two or three days after, I couldn’t even get out of bed. But it was worth it to become a world champion and to beat Chris Eubank, one of the top fighters ever from this country.

‘It was the best experience I could have towards my reign as a world champion,’ said Calzaghe, whose proud 46-0 record includes the scalps of Jeff Lacy, Mikkel Kessler, Bernard Hopkins and Roy Jones Jnr. ‘No fight was as hard as that.’