Arsenal are set to be without Shkodran Mustafi for Saturday’s Premier League match against Watford as the defender’s thigh injury continues to be assessed.

Mustafi suffered the muscle problem while on international duty with Germany during the first half against Azerbaijan, as the holders secured their place at the 2018 World Cup on the back of 10 straight qualifying wins in Group C.

Following the 5-1 victory in Kaiserslautern, Germany manager Joachim Low suggested it was a ‘torn ligament’, which if confirmed would rule the 25-year-old out for a substantial spell. 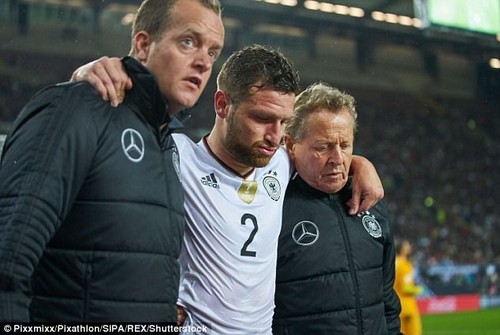 While Mustafi will be absent when the Gunners resume Premier League action in Saturday’s late kick-off at Vicarage Road, it is understood the full extent of the diagnosis is still being assessed.

Arsenal manager Arsene Wenger has something of a defensive selection poser for the trip to Hertfordshire should he look to continue with a three-man backline.

While Nacho Monreal is expected to be available, France defender Laurent Koscielny has been nursing a troublesome achilles which flared up before the international break, while Calum Chambers is recovering from a groin problem.

Rob Holding, who played against Brighton with Koscielny, and veteran German Per Mertesacker are other options to come in for Mustafi.

Arsenal could be boosted by the return of playmaker Mesut Ozil from his knee injury and England forward Danny Welbeck, who has now resumed full training after a groin problem sustained during the goalless draw at Chelsea on September 17.

Following two defeats from their opening three Premier League matches, Arsenal are unbeaten in seven outings in all competitions, with four successive victories.

Won superiority of Europe on volleyball