In both mountain racing won Ruhljad Elena from Novosibirsk 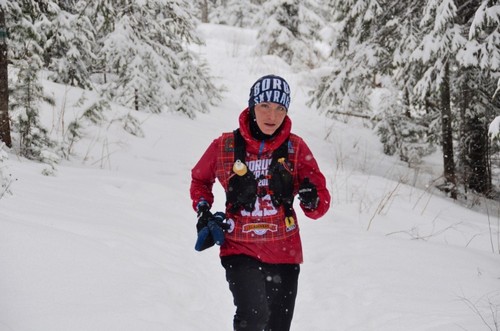 Novosibirsk runner Elena Ruhljad won the first stage of the Cup of Russia in skyrunning in the disciplines of “race” and “vertical kilometer”, which took place last weekend in the mountains of the Western Sayan mountains, on the border of the Republic of Khakassia and the Krasnoyarsk territory.

More than 30 fans of extreme running from Novosibirsk took part in the high-altitude race BORUS SKYRACE and the race to the top GLADENKAYA Shaved VERTIKAL.

In the high-altitude race at the mountain Borus was tested more than 150 athletes from across the country. This year athletes faced very hard weather conditions: strong gusty wind, snow and fog. The length of distance was about 18 km, with a climb of nearly two miles.

“Heavy snowfall at the start made it clear that the top nothing good can be expected. And so it proved.
When I came out of the forest, began a strong gusty wind, a Blizzard, visibility was very poor. Underfoot the snow, sometimes ice, kurumnik.

I was without my glasses and it was hard to open my eyes with a headwind. Had to squint to shield his face with his hands and hide in a fleece scarf and a hood. The supply of water in the backpack, quickly froze and became an additional weighting. Often had to grab large stones with his hands, so gloves were wet and frozen. Feet are soaked and froze,” – shared impressions with the correspondent NGS participant of the race Novoselova Olga from Novosibirsk.

Due to the bad weather, the organizers have shortened the distance: athletes were unfolding down on the main top of the Big Borus, and a kilometer before – on the Small Borus. The passage of the ridge between these peaks became deadly.

High-rise has won the race the Novosibirsk sportswoman Elena Rahlaga – leading athletics, MS in skyrunning, silver medalist of the world championship in mountain running in 2011 and defending champion of Russia in skyrunning in the discipline “marathon”. She overcame the distance in 2 hours and 59 minutes. The fastest among men was Yuri Stankov from Krasnoyarsk – his time was 2 hours and 30 minutes.

Elena arrived at the race with two young sons, while the mother escaped, the children were cheering for her at the bottom.

“Rival on the heels did not occur. To be honest, I never look who is back there running because it’s too much information. You’re just doing your job”, – she told to the correspondent NGS.

While running felt cold feet, confessed to Elena, but without consequences. No luck opponent – Natalia Neshcheret from Chelyabinsk: it is frostbitten toes.

In Novosibirsk Elena coached runners. According to her, even beginners can try their hand at Borus – if not to set right goals quickly to run, then the competition turned into a kind of campaign.

On the second day of competition, April 1, more than 100 people ran to the top of the mountain GLADENKAYA Shaved VERTIKAL. The distance of the “vertical kilometer” was 3.5 kilometers in length and 950 feet in height.

The first finished Elena Ruhljad with a time of 49 minutes 15 seconds. Third place was taken also of the Novosibirsk sportswoman Anastasia Trishkin. She ran to the mountain for 52 minutes, 25 seconds. Last year, she also became the leader of the “vertical kilometer”.

Anastasia as Elena, is a master of sport of skyrunning and coach of the Novosibirsk School extreme running “ABEGA”. Borus at this time, Anastasia has decided not to run.

“It was such a mental race, and now turned in pursuit. Before the distance was only one way to the top. And now the tongue shoulder, the tongue over the shoulder and down no cordiality in the opening of the season. Vertical kilometer this year is heavier than in the past: sticky snow, it was hard to climb. But, overall, I am satisfied with the result to start the season well,” said the correspondent NGS Anastasia.

Last year the weather during the race at Borus was much warmer and more comfortable. Athletes could enjoy the mountain panoramas that open up from the mountain.