Bosnia-Herzegovina went into their final 2018 World Cup qualifier knowing they needed a miracle to reach the play-offs, so their fans made other, more fiery plans.

The eastern European nation needed to win in Estonia and hope Greece lost at home to a Gibraltar side yet to win a point in the group – and as it turned out, although Bosnia won 2-1, the Greeks eased past the minnows 4-0.

Before that, however, the Bosnian supporters vented their displeasure and frustration by hurling hundreds of red flares onto the pitch after 14 minutes, causing the game to be held up until the smoke cleared. 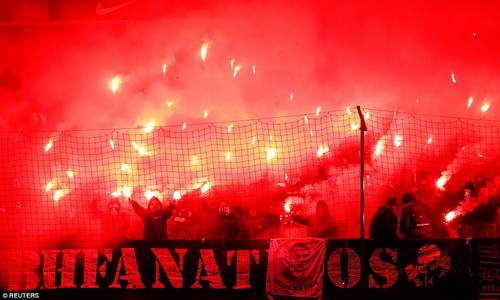 The game was suspended in the 14th minute after hundreds of fireworks were thrown on the pitch at the A. Le Coq Arena 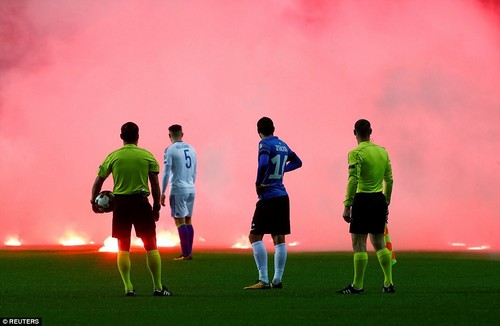 The game was able to be completed after being disrupted for several minutes, with Bosnia going on to win the match 2-1

Incredible pictures from Tallinn show the Estonian and Bosnia players shrouded in smoke, as the away end became a sea of red sparks and faces masked by hoods and bandanas.

The players were not forced to leave the pitch, and there was no real violence or scuffles within the crowd itself, and once the fireworks were cleared the game was able to continue.

However before then the Bosnian fans certainly added notability to a game which otherwise fell very much into the dead rubber status of World Cup qualifiers. 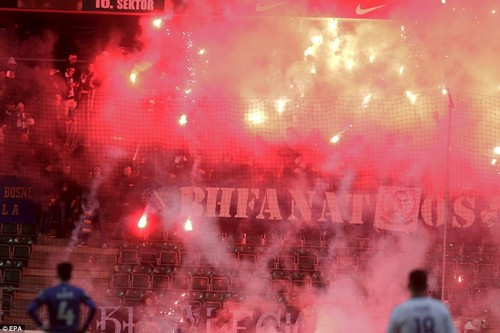 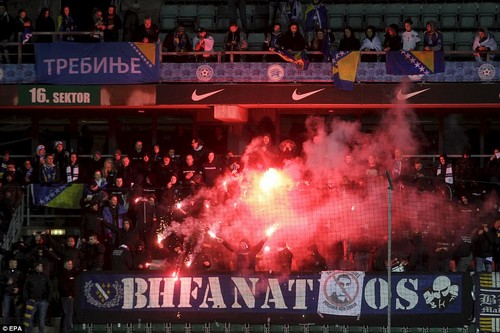 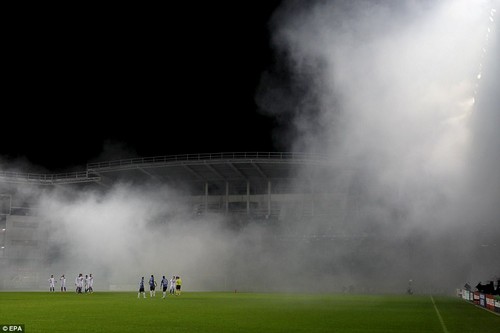 A huge plume of smoke engulfs the stadium in Estonia, as fans showed their displeasure after a difficult campaign for Bosnia

Firemen run on the pitch to take care of the flares thrown by Bosnia fans, armed with sand buckets and fire extinguishers

Bosnian forward Izet Hajrovic broke the deadlock shortly after half-time when he smashed a volley past goalkeeper Mikhel Aksalu, who produced three fine saves while the home side were on the back foot.

Midfielder Ilja Antonov equalised with a rasping low shot from 20 metres in the 75th minute after picking up a loose ball and rifling it past Bosnia’s Asmir Begovic.

Hajrovic was on target again almost ten minutes later, drilling an arrowed shot past Aksalu after being put through by Roma striker Edin Dzeko, who came off the bench for a makeshift Bosnian side missing the bulk of their regular starters.

The result left Bosnia third in the group on 17 points, and unable to repeat their heroics of four years ago when they reached a World Cup finals for the first time in Brazil 2014.

The officials and an Estonian player, against a backdrop of red flare smoke,wait until they can get the game underway again

Bosnia brought a significant travelling support to the Baltic nation, and the throwing of the flares seemed to be planned

Most of the Bosnian support came wearing black outfits, some wearing special hoodies with messages printed on the back