Bruce Arena accepted full responsibility after the United States failed to qualify for a World Cup for the first time since 1986.

A shock 2-1 loss to Trinidad and Tobago on Tuesday night saw the Americans drop from third place in CONCACAF qualifying to fifth after wins for Panama and Honduras.

The US conceded twice in the first-half following an Omar Gonzalez own goal and a second from Alvin Jones. Christian Pulisic reduced the deficit but the US couldn’t find an equaliser. 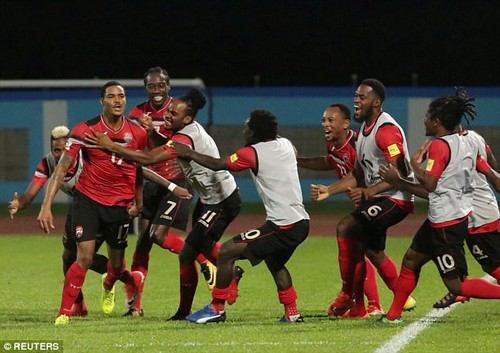 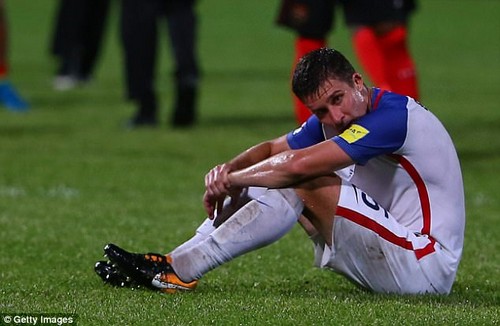 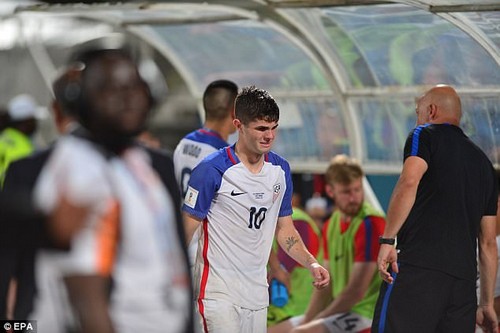 Christian Pulisic scored for the States but it proved too little, too late in Couva

Coach Arena said: ‘Clearly we are very disappointed. We had everything there for us today. No excuses for us not getting a second goal and coming away with at least a point.

‘It’s a blemish for us. We should not be staying at home for this World Cup and I accept responsibility.

‘It never mattered to us the scores of the other games. We failed on the day. No excuses. We failed today. We should have walked off this field with at least a point.

‘It’s clearly good for CONCACAF that it was such a competitive go at it this time around. Certainly Mexico have been the dominant team in the Hexagonal.

‘Costa Rica proved to be of quality. And the teams that finished third Panama, fourth Honduras and fifth USA were pretty inconsistent throughout the campaign.’

On his team’s performance in the 2-1 defeat, Arena added: ‘It was a poor first half.

‘Certainly a few fortunate goals. Outstanding second goal. Unfortunate first goal. And a half where we didn’t play well. Started the second half in good shape.

‘Give our opponent credit. They played well. They played hard on the day. They won a lot of individual battles against us and they deserve all the credit for their win.

‘Our centre-backs were not confident enough with the ball. Our forwards were not able to hold the ball. They did a poor job there.

‘We didn’t get Pulisic into the game. We played poorly. The first goal was unfortunate. Those things happen. The second goal was an incredible shot. What can you say?’

Juventus documentary series set to be launched on Netflix