Jayson Tatum caught a pass underneath the basket, shook off a hit and went up for the go-ahead lay-up with 23 seconds left as the Boston Celtics beat the Philadelphia 76ers 114-112 on Wednesday night to advance to the Eastern Conference finals.

Tatum scored 25 points, Jaylen Brown had 24 and Terry Rozier 17, sinking a pair of free throws after forcing Joel Embiid’s turnover in the final seconds. Al Horford added 15 points and eight rebounds for Boston, who will play Cleveland for the second straight year for a spot in the NBA finals. Game 1 of the series is on Sunday in Boston. 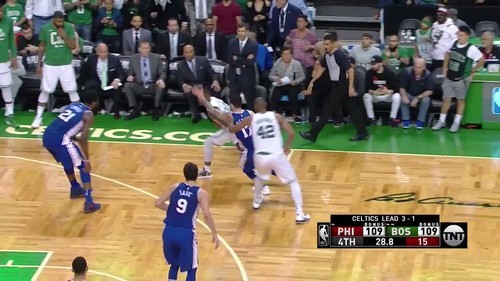 “I feel like we more together than last year,” Rozier said. “Obviously guys been going down all year, and it’s like you never know who’s going to go down. But we found a way, we pulled together. I’m not saying if we’re better or not, but we definitely going back to the Eastern Conference finals, so that’s a blessing.”

Embiid had 27 points and 12 rebounds for the 76ers, who roared back into the playoffs for the first time since 2012, winning 20 out of 21 games before Boston beat them in three straight games to open the conference semi-finals. Dario Saric had 27 points and 10 rebounds on Wednesday night, while Ben Simmons, many people’s choice for rookie of the year, added 18 points, eight rebounds and six assists.

Embiid had a chance to tie the game after Tatum with 18.8 seconds left but he missed a heavily contested lay-up.

The Celtics and Cavaliers will meet in the Eastern Conference finals for the second straight year, but both teams have undergone near-complete overhauls since the Cavaliers eliminated Boston in five games last year. Only four players on each side remain from that series.

Australia’s Aron Baynes was the subject of an odd statistic. He scored one three-pointer, taking his total for the series to seven. He has more in these five games than in the other 409 games of his career combined, according to ESPN.