Chelsea star Eden Hazard took the time to make a getaway ahead of his side’s Premier League clash with Bournemouth this weekend.

The Belgian made a quick dash to the French capital to visit Disneyland Paris, which is celebrating 25 years since its opening.

And, in the process, became acquainted with one of the very few faces which are more recognisable than his own the world over. 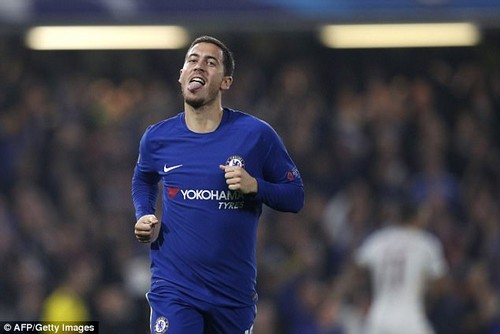 ‘I got to meet a new friend this week, wonder who his favourite team is?,’ the Belgium international wrote on Instagram.

Donald Duck, donning his famous blue outfit, is one of the faces of Disney, one of its hallmark characters – much like Hazard has become at Stamford Bridge.

And although Hazard is working his way back to his best form since his return from an ankle injury, Antonio Conte will hope he fires this weekend.

The Blues have won only one of their last three Premier League games and will need a positive result against Eddie Howe’s men to ensure the nine-point gap between them and table-toppers Manchester City does not widen.

Hazard has netted only twice this season, but both were telling. They came in the Champions League clash against Roma – the first putting the Blues two goals to the good, the second snatching a draw from the jaws of a 3-2 defeat.

How Conte would love his star man to find his scoring boots once again at the Vitality Stadium this weekend.