Month-hour shifts, tension and communication with patients from intensive care to rush to the stadium, doctors of city hospitals have endured steadfastly. On Saturday, July 14, at the last match at the stadium “Saint Petersburg”, doctor of the 31st hospital on Krestovsky island almost joyfully said: “the Last night – game over”. 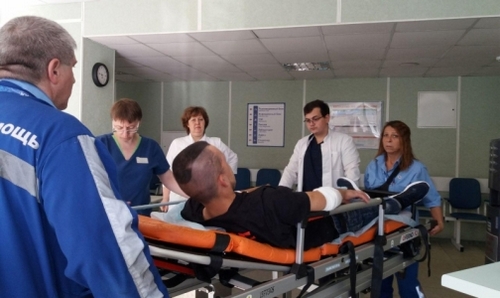 How was work the doctors at the City infectious hospital. Botkin City hospital No. 31 during the world Cup to learn “Dr. Peter”.

With dysentery – the stadium

Doctors Clinical infectious hospital named. Botkin will remain contradictory memories of an international tournament. Had to face and with malaria from Nigeria, and from typhoid from India. As told to “Dr. Peter” the chief physician of hospital Alexei Yakovlev, from 46 guests of the 2018 world Cup, taken to the hospital Ambulance, 33 were foreigners (citizens of Argentina, Brazil, Nigeria, Colombia, USA, Morocco, Uruguay, Germany, Portugal, China, India, Sudan, Egypt, Australia and Iran). 27 persons suffered from intestinal infections.

– 70-year-old man admitted for dysentery, after transfer to the intensive care unit from the intensive care unit immediately zasobiralsya to the stadium, – says Alexey Yakovlev. And patients from Nigeria after treatment flatly refused to leave the clinic. Those who agreed, asked the doctors the money to go to the airport. Moreover, the negotiations with the Embassy of that country were unsuccessful.

Guests from Uruguay could hardly distinguish the hotel from the hospital: he brought his fellow citizens hospitalized suitcases with things and left them in the lobby of the clinic on Piskarevskoe prospectus, to the medical staff “were taken to rooms”.

To root for her and for other guests arrived with a wide variety of infectious diseases – acute tonsillitis, severe respiratory diseases and herpes infections, hepatitis, mumps (mumps).

City hospital № 31 took the basic “strike” during matches as it is located on Krestovsky island – right next to the stadium. Its tasks include the provision of medical assistance to members of sports delegations, as well as all patients and victims seeking medical attention at the stadium and near it. We will remind, in Petersburg, there were seven matches.

According to the chief physician of hospital Anatoly Ryvkina, the work of the hospital was quiet and not especially differed from her work on ordinary days, although emergency crews on match days was reinforced with specialists from other hospitals and were ready to render any emergency medical care, in accordance with the requirements and standards of FIFA.

– The restless was on duty on the day of the match Argentina – Brazil. In addition to the usual patients, “Ambulance” delivered to us after the game 12 fans of both teams with various injuries obtained as a result of fan clashes, accompanied by friends and relatives. Fortunately, from a medical point of view, all these patients presented no difficulty for the doctors. As, however, was not the language barrier: a feature of the work was the simultaneous communication of the staff with a large number of foreigners. Many of them are still reeling from the football passion, and continued hotly debate in the emergency Department the results of the last match, when making the consent to a particular intervention was keenly interested in the nature of injuries, treatment methods and prognoses. With foreigners on equal talked to the doctors and volunteers of the world Cup – said, “Doctor Peter” during his last tour of duty at the world Cup in 2018 Dmitry Chistyakov, head of the Center for advanced surgical technology.

But the most interesting thing was to work during the first match, doctors tell us. When after the game, Morocco – Iran “Ambulance” was taken to the clinic two players from these teams, the doctors have never identified the heroes of the occasion. And they all wondered why he was not asked to take a picture. One athlete arrived with a suspected broken rib, another had a concussion and had to exclude more serious damage. After helping they came out to play again.

In preparation for the world Cup it was planned that the clinic will accept Central players, members of official delegations, volunteers. But, as the doctors say, only three players have needed them, and of the “star” of representatives at the tournament, was seriously injured sister of the leader of the Brazilian national team. Among the received most – affected fans and sick employees of the stadium. And it was the most common acute illness or exacerbation of chronic such as ischemic heart disease, hypertensive crisis, appendicitis, strangulated hernia, kidney stones, etc. And in the last match England – Belgium “Fast” delivered them.

No sooner had the doctors be happy that after the battle the Argentines injured in the fighting was no more, as here in the emergency room came a young man with a concussion and neck injury. The fan with the next row decided that the guy took his beer and hit the head so hard that the young man needed medical help.

The doctors at the City ambulance station and was on duty at the stadium and in the 31st hospital. With minor ailments and minor injuries were handled on the spot. Brought to the clinic when needed clarification of the diagnosis or condition required immediate help. And on the last day of such duty was, too. The young woman became ill from the heat – fainted, fell and broke his arm. A few minutes after her delivery in “shock” admissions doctors was already waiting for 62-year-old Russian fan with unstable angina, tahisistolicescie paroxysmal atrial fibrillation.

Cheering at the stadium should not aching

Games were quiet during the games of the Confederations Cup was even more patients – said the chief doctor of the 31st hospital Anatoly Ryvkin. – Too emotionally aching in the stadium, people get sick in life. Example: we got a Russian fan from another city with hematuria – his home was recently performed complicated surgery for cancer disease and the doctor recommended limited load following the operation, and he left sick in St. Petersburg…

During every match in the 31st the hospital was on duty multidisciplinary teams of traumatologists, the surgeon, ophthalmologist, urologist, gynecologist, a transfusiologist, a cardiologist and a cardiac surgeon, internist, neurosurgeon, maxillofacial surgeon. They treated nearly 60 guests of the championship. The other days worked in a usual mode.

USA out of World Cup: Bruce Arena’s side stunned