Chris Eubank Jnr was embroiled in a Twitter spat with former pop singer Lily Allen over a video showing his father telling off two ring girls.

Eubank Jnr had originally posted the video on Monday morning, in which Eubank Snr tells two girls to get out of the camera shot as his son was giving a post-fight interview following his victory over Avni Yildirim in Stuttgart.

The post, which received over 12,000 likes and 3,800 retweets, was picked up by Allen, who took offence to the way the boxer’s father had behaved towards the women by shooing them away from the camera. 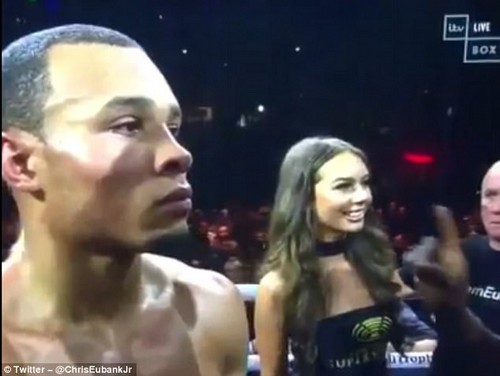 His father, Chris Eubank Snr, chased them out of the shot as he took their place by his son

To all ring girls. Do not photobomb me as my dad has a very particular set of skills. He will look for u, he will find u & he will pie u �� pic.twitter.com/skwdIACh8d 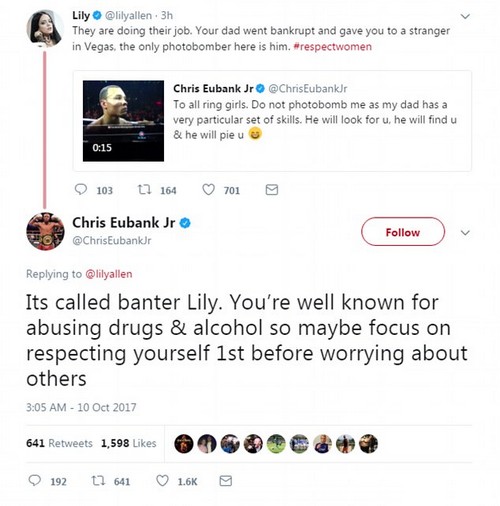 Allen mocked Eubank’s upbringing by pointing to his father’s past, drawing a response

Chris Eubank Jnr and his younger brother Sebastian were adopted by Irene Hutton in 2006.

The pair flew out with their father in September of that year to stay with Hutton, whom their father had met at a bar in Paris.

Eubank Snr and his wife have claimed they allowed the paperwork in order to help their sons sporting careers and help them gain dual citizenship.

The documents signed in Nevada suggested their mother Karron, was struggling to raise four children by herself after a bitter divorce.

Eubank Jnr posted the clip along with the message: ‘To all ring girls. Do not photobomb me as my dad has a very particular set of skills. He will look for u, he will find u & he will pie u.’

Allen responded to the tongue-in-cheek post on Tuesday morning stating: ‘They are doing their job. Your dad went bankrupt and gave you to a stranger in Vegas, the only photobomber here is him. #respectwomen.’

Eubank Jnr moved to Las Vegas in the US in 2006 and was formally adopted, along with his younger brother Sebastian, by divorcee Irene Hutton.

However, the pair’s father, and mother Karron, have always insisted both were allowed to be adopted to enable them access to dual citizenship, as well as to further their sporting careers.

Eubank Jnr did not take kindly to the jibe aimed at his father by Allen and hit back, saying: ‘Its (sic) called banter Lily. You’re well known for abusing drugs & alcohol so maybe focus on respecting yourself 1st before worrying about others.’

Allen stood her ground and responded ‘I’m actually sober, but thanks,’ and came back again in the spat, calling Eubank Snr misogynistic for his handling of the situation in the ring in Germany.

‘It’s called misogyny,’ she replied. ‘Are you saying people with addiction and mental health issues issues have no self respect ? #BIGMANTALK.’

Allen’s past problems with addiction have been well documented and has previously stated she is not ashamed of taking drugs in an interview with GQ magazine.

‘I’ve taken drugs. I found them and find them fun and I don’t think I’m a bad person because of it,’ she told the magazine back in 2009.

At last year’s Notting Hill Carnival she was seen slumped behind a DJ set after an afternoon of heavy drinking at the annual street festival.