The success of the national team of Russia hoisted on the football, even those who had been to him decidedly indifferent. After leaving the group and a sensational victory over Spain, thousands of fans – both newly minted and experienced – are given promises. Among the standard “quit Smoking”, “pump up the press” come across original ideas in the style of “nabet mustache cherchesova” and even “get married, because my mother asks me”. 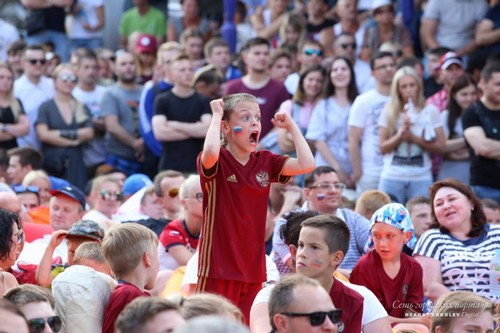 Predictions and promises of the Russians we’ve Packed in one compilation. Look, promise and, of course, make your predictions for the match Russia – Croatia.

A month ago nobody would have thought that football is able to reveal to others a great feeling. So the journalist from Rostov-na-Donu, Daria Maksimovic promised to give flowers to the police officer. As a resident of Samara and is decided on a desperate step – to break with the past.

If you reach the semi-finals, I promise to forget the former

Russian journalists with their promises suffered from the world Cup seems stronger than many. Recently, leading Sports FM Alexander Sofronov had to spend all day in a dress. Ural and his colleague, journalist Andrew Warkentin his duty still to be done: in case of victory the national team in one-fourth finals, he promised to cover for friends table for 150 thousand rubles. If Russia wins again, check the Banquet will be doubled. Yekaterinburg restaurateur Eugene Kexin ready to provide the interviewer with a substantial discount if he would choose to holiday on one of his sites. Kexin can understand, because he himself, in case of our victory in the world Cup promised to rewrite its share of restaurants on the coach Stanislav Cherchesov.

For the victory team gift will be given to the member of city Council of Krasnoyarsk Vladimir Vladimirov. Local artist Vasily Slonov has promised to produce for the people’s choice… brand birdhouse.

Popular weather girl from Chelyabinsk Larisa Sladkova has promised to undress for photos and put the result in the social network. Some users considered it a threat.

Meanwhile, the power team believe not all: for example, in Samara, one blogger believes that the results are predictable, and he will no longer watch football.

If so, the fate that held our Croatia, I’m more football I will not watch, because it is really corrupt system?
With this wooden game is nothing for us to do next)
32 years still sit at home, do?

And someone’s successes provoke: Twitter community is already preparing to storm the next championship in Qatar.

Here’s the challenge worse: if Russia is Croatia, you’re going to root for them in Qatar for the next world Cup (if you of course qualify, hehe)

Or to gain additional knowledge.

To be a little more conscious.

If the Russian Team will beat the Croats on 7 July and will be released in the semi-finals, I promise to collect all the bottles and pass, to wash dishes, to poison cockroaches, and generally shave and get a haircut, wear clean clothes. Three days is not going to climb bins! )))

The account of the Bank of Russia has promised to release the coin polrublya, if the team wins Croats. We don’t know whether it is the official representation of the Central Bank on the Internet, but the idea sounds fun.

A couple of creative promises that it is better not to submit:

I eat your skin from the heel, if Russia will host Croatia#Russiahouse

if Russia beat Croatia, I go to the army

What will you do if Russia beat Croatia?#DjRuslanNigmatullin #WorldCup pic.twitter.com/3jRfMzO818

To fulfill the promise or not is an individual matter. But the victory of the Russians in another round of the world Cup – agree that a strong motivation. So…