Conor McGregor expressed regret on Thursday for a backstage melee at a Brooklyn arena, and is in plea negotiations to resolve charges in the case. The former UFC champion and co-defendant Cian Cowley remain free on bail after a brief court appearance.

The men marched into court in tight blue suits, and passed a gallery packed with reporters and other defendants waiting for their hearings. They stood and said little during the appearance. “I regret my actions that led me here today,” McGregor said outside court afterward. “I understand the seriousness of this matter and I’m hopeful to get it resolved soon.” 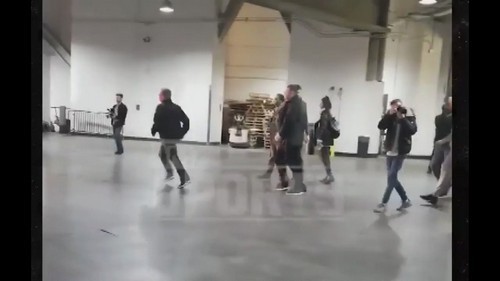 yoooooo… first time seeing this one. Conor has legit lost his mind. pic.twitter.com/XcLFd2FIMo

Video footage showed McGregor hurling an object at a bus full of fighters after a press conference for UFC 223 at New York’s Barclays Center in April. Fighters Michael Chiesa and Ray Borg were injured by shattered glass and unable to compete. McGregor cheered the 25-year-old Cowley on Saturday as he fought in Belfast; they flew to the US together on a private jet for the hearing. Cowley said after the fight that he was hoping to get the case “out of the way.”

Assistant district attorney Janet Gleeson said the case hasn’t been presented to a grand jury for possible indictment because of the plea negotiations, signaling interest from all sides in resolving the matter swiftly.

McGregor and Cowley are due back in court on 26 July.