Brazil defeated Peru 3-1 to win its first Copa America title since 2007 on Sunday. 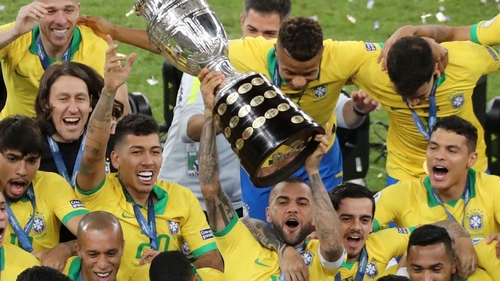 Everton led the team to victory scoring a goal and setting up another to give Brazil its ninth Copa América trophy, and fifth at home.

Gabriel Jesus and Richarlison also scored a goal each for Brazil, which has won the title every time it hosted the tournament.

Brazilian football star Neymar, who could not play due to injury, sat close to Brazilian President Jair Bolsonaro among the crowd of nearly 70,000 at packed Maracanã Stadium.

Bolsonaro, who was accompanied by several Cabinet ministers, received mostly jeers from 70,000 fans at the stadium.

Brazil got the win despite playing with 10 men from the 70th minute because Jesus was sent off with a second yellow card.

Peru scored through Paolo Guerrero but could not pull off one last upset after eliminating Uruguay in the quarterfinals and two-time defending champion Chile in the semifinals.

Peru, which had been routed 5-0 by Brazil in the group stage and barely escaped early elimination, was trying to win its first Copa América trophy in 44 years. It hadn’t made it to the final since it won its second South American title in 1975.

“… we are champions and now we have to win against the Europeans in the World Cup,” Victor Ramalho, a Brazilian fan, told Associated Press.

The victory helped Brazil regain some of the fans’ confidence following the team’s elimination in the quarterfinals of the 2018 World Cup in Russia. It will also ease some of the pressure on coach Tite, who had been criticised for his selections and the team’s lacklustre performances.

Brazil hadn’t made it past the quarterfinals of the Copa América since beating Argentina 3-0 in the 2007 final in Venezuela. It didn’t even get past the group stage in 2016.

The last time it won the Copa América at home was in 1989, when Romário scored the winner against Uruguay at the Maracanã.

Brazil’s only other title since 2007 came in the 2013 Confederations Cup, also at home.

It was an even match from the start, with Brazil not being able to press too much despite being urged on by most of the crowd at the Maracanã.

Everton opened the scoring in the 15th minute from close range after a well-placed cross by Gabriel Jesus, who made a great run down the right flank.

Guerrero equalised for Peru by converting a 44th-minute penalty kick after a handball by Brazil defender Thiago Silva.

Jesus put Brazil ahead again in the third minute of first-half stoppage time with a low shot after an assist from midfielder Arthur.

Peru tried to take control after Jesus was sent off for a hard foul on an opponent, but the visitors were not able to create many significant chances.

Brazil sealed victory when Richarlison, who had missed a few matches because of the mumps, converted a penalty kick in the 90th after Everton was fouled.

Both penalty kicks had to be delayed for video reviews.

Uruguay is the Copa América’s most successful nation with 15 titles, one more than Argentina.