Surrey went top of the table with an innings and 69-run win over Somerset at Guildford – the first time they have won three consecutive games by an innings since 1958, when they won the Championship.

Somerset were bowled out for 210 following-on, stranding James Hildreth on 89. There were four wickets each for Morne Morkel and Jade Dernbach.

Ben Cox made an unbeaten 58 as Worcestershire declared on 484 for seven to set Lancashire 602 to win. Keaton Jennings kept hopes just alive with 135 not out; Lancashire were 269 for four at the close.

In the pink-ball game at the Ageas Bowl Hampshire took a first-innings lead of 97, Jimmy Adams making 147; Harry Brook took five wickets. Yorkshire were 91 for 2 in reply.

Sussex won by an innings and 64 runs at Arundel, Durham unable to recover from losing six wickets for nine runs in the morning; Leicester were bowled out for 186 at Grace Road. Set 381 to win, Middlesex were 82 for 3 at the close.

At Tunbridge Wells Kent declared at 446 for eight. Warwickshire, set 519 to win, finished on 229 for one as Ian Bell moved to his third hundred in four Championship innings.

Derbyshire were bowled out for 362 at Swansea, a first-innings lead of 79. The debutant Prem Sisodiya took three for 54. An unbeaten stand of 153 from Usman Khawaja (79) and Kiran Carlson led Glamorgan to 201 for three.

In the pink-ball game at the County Ground Northamptonshire eased to their first Championship win of the season, a 10-wicket victory over Gloucestershire. Brett Hutton finished with eight for 57.

The Spin: sign up and get our weekly cricket email.

Sorry about the silence everyone, was just writing up: Keaton Jennings, what a man! Unbeaten on 131, Lancashire 263 for 4. Dan Lawrence has been out at Chelmsford – Notts on the march. Gareth Berg guiding Hampshire to a healthy first-innings lead over Yorkshire at the Ageas.

Sussex have won – Durham unable to recover from the morning’s disaster. Shame for Arundel though. Stevie Eskinazi still there, but Middlesex have a long road.

Stumps at Tunbridge Wells where Ian Bell has ANOTHER century. Warwicks need 290 to win. Not impossible. And hope springs still at Swansea, Khawaja still there, 70 not out.

I’ve got to dash now because they’re turning off the wifi. Lovely company – enjoy your evenings.

And a second wicket for Milnes at Chelmsford as Essex lurch to 27/2. Hampshire and Yorkshire have transposed into a different century at the Ageas: slow, steady, nothing to cause any alarm. Hampshire trail by 31 runs.

Sixties both for Bell and Sibley, and at Swansea Khawaja is still there.

Stuart Poynter holding off the inevitable at Arundel, 46 not out. 181/6. Fifties apiece for Bell and Sibley in Warwickshire’s plucky reply.

And news of the most unfortunate Jack Leach. He won’t play in Somerset’s next game, the day/night Championship match at Chelmsford, under the 7-day concussion rule. So… hit in the nets by a dog-ball-thrower, out for six weeks, comeback match. Bowl four overs, get hit on the head by Morkel. Glasses broken. Concussion. Out for another week. And today is his birthday. Happy Birthday Jack!!

Cook lbw for a four-ball duck in Essex’s pursuit of a humungous number of runs. Need another 439 to win. 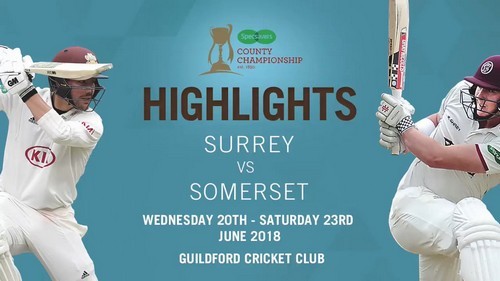 ? Highlights from today’s win over Somerset, putting us top of Division 1. #3Feathers pic.twitter.com/nq3pwIQbqQ

I just met Sid, who flew over from Mumbai to Guildford to watch Virat Kohli play.

Leicestershire 150 for 8, 3 wickets each for Murtagh and Harris.

And it’s all over: Waller caught hooking for 0. Hildreth gets an arm around his shoulder from the umpire, not out 89. Surrey win by an innings and 69 runs. Surrey’s first win at Guildford since 2002. Championship-winners 2018, in my book.

An eighth wicket down at Guildford. Dernbach got his man, Davey caught behind for 21. Someone stay with Hildreth, 89 not out.

Lancashire have lost a wicket. Davies lbw D’Oliveria 64. That brings Haseeb Hameed in and I think we know how this goes. Come ON Has! 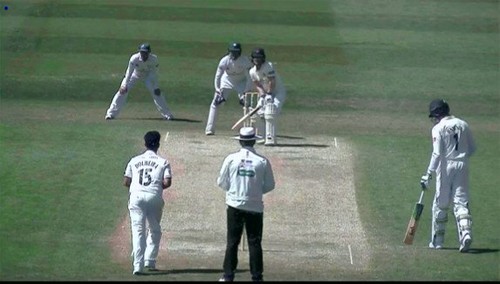 Many “come on lads” from the Surrey fielders. The very next ball Josh Davey is dropped at slip on 19 off Dernbach. A bi-plane passes overhead and a mid-afternoon sugar-low drifts across the spectators. Dernbach, however, is not happy.

Notts nine down now, lead of 382. Durham teetering-about-to-tumble 119 for 5. Collingwood out for a duck. Graham Clark 45 not out.

And that’s six over the fence and onto Woodbridge Road! Hildreth off Virdi. New balls please!

I don’t really want to put this in writing but Lancashire are nearing an unbroken first-wicket partnership of 100.

Rikki Clarke getting his knickers in a twist.

Derbyshire now leading Glamorgan by 71 , forties not out for Critchley and Wilson.

A deserved half-century for Hildreth off 89 balls, as he nurdles Clarke for another four.

A disconsolate Bess trudges off the field, bowled by Clarke for 6. Somerset 145/7.

All still well for Lancashire and Warwicks. Northants have won by ten wickets.

It never rains…we have our second concussion substitute of 24 hours. Max Waller will replace Jack Leach who was hit on the head yesterday by Morkel, broke his glasses and was out shortly afterwards..

The plucky Gloucestershire defence is over. Northants need 31 to win.

Given the catastrophic drop in insect numbers, lovely to see a dragon-fly flitting about the pavilion at Guildford. Haven’t seen many butterflies at all this year.

At lunch, a recovery of sorts by Hildreth and Gregory, but Somerset won’t be dining on hope this evening. Lunch-time updates to follow

Under-dog news: no wickets yet fallen at Chelmsford or Tunbridge Wells and still only one down at Arundel.

Sorry, I’ve had wifi problems but just before lunch a reminder that Surrey play Yorkshire next week and you can watch the game unfold on the Surrey and Yorkshire websites and Sky digital. Four cameras, “bespoke” commentary – almost, almost, as good as free-to-air.

Virdi to bowl from the pavilion end, first time today.

Very happy to be working with @YorkshireCCC to deliver multi-camera live coverage from next week’s game in Scarborough.

Slow going at Swansea, but Derby nearly have parity with five wickets in hand. A hundred for Alex Hughes, run-out for 103.

And I see Lancashire need 602 to win in all the time in the world.

And you were quite right BTL about the goings-on at Tunbridge Wells – Keith Barker was removed from attack after a second warning for running on the pitch.

The England selectors have obviously been sent on away days – Trevor Baylis is watching the Lions, Smith is at Guildford. A pat on the back for any greater/lesser spottings.

Lions update: India A 85 for 3 – the most striking thing to report so far is Ben Foakes’ catch to dismiss Mayank Agarwal. And Ryan Patel comes on from his lucky end!

Durham are 9 for 1, with Cameron Steel the man out, b Jofra Archer for two lovely, but inadequate, fours. Here’s Arundel looking charming anyway.

? Another beautiful day in Arundel!

WICKET! Davies caught at gully off Clarke for 9. 69 for 5. At this rate Smith’s not going to see Virdi bowl, unless of course we’re mistaken and he came instead to see the old warhorse at his old hunting ground.

This, remember, is a second-string Surrey side.

Morne Morkel’s wife is bowling at her little boy to the side of the pavilion… while Durham complete their morning’s work and prepare to follow-on. They seem to play better on days 3 and 4 but even they can’t get out of this one. Can they?

A (below) picture of Danny Lamb – English cricket’s first concussion substitute. I can’t do better than Mes’s “Lamb’s to the Slaughter” but I just hope they’re all nice to him. Not debut of dreams, but a debut nonethless.

At New Road, Lancashire have taken a couple of wickets but Cox and Whitely are hitting to and over the boundary boards, a bit of fun before the serious stuff begins.

Matthew Milnes is out at Chelmsford, a second for Quinn. Notts: 62 for 2 with a lead of 236. And ANOTHER at Guildford where Abell is flumoxed into inadequacy by Dernbach for 5. 40 for 4.

No wickets yet at Tunbridge Wells, where Zak Crawley has moved onto 67, or Swansea. Durham now 9 down, having lost five for seven runs so far this morning.

All these wickets-a-tumble on a hot day are proving a bit much to keep on top of. But let’s try: a wicket at Grace Road, where near first-innings double-century maker Ackermann was bowled by Harris for 2. Harris’s second of the innings.

And another wicket here at Guildford, George Bartlett has a wafty drive at Dernbach and is caught for 7. Commiserations and a little wave to all the BTL-ers who’ve made the journey today. Oh my Lord, there goes another, next ball, Byrom c Jacks b Morkel, 19. 33/3

Durham on the slide too, can they really have lost three wickets this morning? Er, yes they can – three in seven balls, two ducks and the one batsman with a chance of holding the innings together out for 90.

Oh Somerset, not living the dream. Renshaw pinned back on his stumps, lbw for 2. 18/1

Another game to keep your eye on is the Lions v India A at Derby, a young team full of superstars schooled at the IPL against a strong young England.

With more lip-smacking weather around the country, a handful of games could finish today. Here at Guildford, Somerset will have to bat much better to take the game into the fourth day, and they’re up against Morne Morkel, four-wicket Rikki Clarke, Ed-Smith watching Amar Virdi and magic man Ryan Patel, swinging the ball this way again in practice this morning. At The County Ground, it’s all over bar the shouting, Gloucester have recovered well after their nightmare of a first innings, but with two wickets in hand they only lead Northants by 25. Much sympathy for Wantage Road administrators, who will miss out on the Friday night crowd.

Lancashire’s batting will have a chance to right a basket-ful of wrongs at New Road where presumably Worcestershire will declare sometime today, with the lead already 478. Kent will hope to wrap things up at Tunbridge Wells against Warwickshire – though the pitch should prove easier for Warwickshire too second innings. Durham’s batsmen have a lot to do at Arundel, while Nottinghamshire’s batsmen should bat Essex out of the match today at Chelmsford. Leicester are on top at Grace Road, though they start today at 0 for 1. Things are more even in the pink-ball game at The Ageas and at Swansea.

Hello and welcome to the third day of this Championship round. It’s a another beauuuutiful day at Guildford, the players are on the pitch lifting impossibly heavy medicine balls and bending low for slip catching practice. And the big news for both sides is that Ed Smith has arrived … more to follow.