In the top-of-the-table clash at Guildford Surrey’s young batsmen made hay on a ground parched mustard by the summer. As supporters on white bucket seats flexed their bare toes in the sun, first Rory Burns, then Scott Borthwick, then Olly Pope made half centuries as Surrey reached 351 for five at stumps against Somerset.

The 20-year old Pope looked in wonderful touch and finished unbeaten on 73. Somerset, who chose not to contest the toss, bowled without much luck. There was a wicket for Dominic Bess and four overs for Jack Leach, back in the side for his first game since being hit with a ball in the nets in early May.

At New Road Lancashire made a late-afternoon hash of their innings, going from 77 without loss to 86 for five, with ducks for Stephen Parry, Shivnarine Chanderpaul, Rob Jones and the luckless Haseeb Hameed. Ed Barnard took four wickets. Lancashire had earlier bowled out Worcestershire for 247, with four wickets each for Joe Mennie and Jordan Clark. Daryl Mitchell held the batting together with 118.

A superb 146 from Ross Taylor guided Nottinghamshire to 311 for six against Essex at Chelmsford. There were two wickets each for Matthew Quinn and Simon Harmer.

In the pink Kookaburra game at the Ageas Bowl Yorkshire recovered from 21 for three to 315 for seven thanks to a century for Gary Ballance and 79 from England’s Under-19 World Cup captain, Harry Brook. Hampshire’s Dale Steyn took four for 48.

In Division Two at Tunbridge Wells, 20 wickets fell in the day. First Kent were bowled out for 197, with five wickets for Keith Barker. Then Warwickshire collapsed to 71 for eight, reaching three figures, finishing on 125, thanks only to a 51-run ninth-wicket partnership between Jonathan Trott (59 not out) and Henry Brookes.

Runs flowed at Arundel, where Sussex finished on 439 for five against Durham thanks to maiden first-class centuries for Philip Salt and, in his third first-class game, Tom Haines.

At Grace Road 151 not out for Colin Ackermann guided Leicestershire to 353 for eight. Middlesex’s Tim Murtagh took five for 52. It was a rain-shortened day at Swansea, where Glamorgan slipped to 52 for five. But Chris Cooke had shepherded the tail to 175 for seven at stumps.

In the pink-ball game at Wantage Road Northamptonshire were dismissed for 282, with Richard Levi, Ben Duckett and Luke Procter all making fifties. In reply Gloucestershire were 25 for one.

Make that Lancashire 86 for 5. Jones lbw Barnard, also for a duck. Barnard now 4 for 20, very quickly.

Looks like I might have closed the blog a bit early. Lancashire now 86 for four. Ducks for Parry, Hameed and Chanderpaul.

And that’s stumps at Guildford, with Surrey on top at 351 for 5. Pope 73 not out off just 85 balls, Jacks not out 15. The pair of them looked young as new lambs with helmets in their arms, walking off the pitch. The shadows are growing and the spectators potter off the ground towards Woodbridge Road. Close of play scores to follow. Many thanks for your company!

A WICKET at New Road. Davies out for 43, Lancashire now 77 for 1, and they save Hass and send in Stephen Parry.

Three of this Surrey team are home-grown British-Asian players: Harinath, Patel and Virdi. Good to see. Incidentally it has clouded over here at Guildford, with the wind lightly buffeting the roofs of the festival tents. And the umpires seem to be changing the ball after only 12 overs or so of the new ball. Ollie Pope has a sweet touch with the bat. An empty train trundles over the red-brick bridge, off on its meander via Cobham. And that’s enough disjointed thoughts.

Lancashire making a good start against Worcestershire – 56 for 0. And the Glamorgan recovery continues – 106 for 5. Warwickshire now 8 down,for 82, Trott 32 not out. Poor Tunbridge Wells – it could be all over by tomorrow.

And fifty for Ollie Pope! Ten smashing fours off 60 balls.

Numbers 6 and 7 for Glamorgan rubbing away some of the rouge of humiliation. Now 87 for 5 against Derbyshire.

Taylor moves on to 130 for Notts; Ballance and Brook’s 100-run partnership at the Ageas comes up in 155 balls. Finch passes 50 in the run-fest at Arundel. Warwickshire now 65 for 7, Trotty surveying the burning deck – not out 29.

I sense the official Lancashire twitter account is watching through its fingers: “We’ve got through 10 overs of the @LancsCCC innings, 23-0 with @JetJennings 14* & @aldavies23 8* in reply to Worcs’ 247ao #WORvLAN

Trying to identify a pied wagtail on the outfield, I miss Patel driving at Abell, caught two short of his fifty. Surrey nearly but not totally on top: 300 for 5 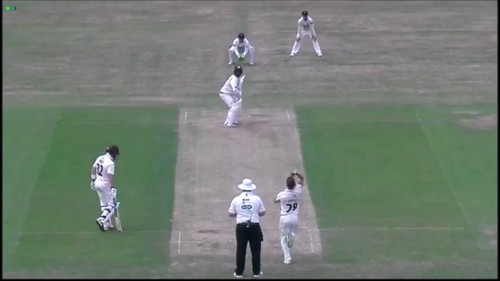 Ballance and Brook going well against the pink ball, last year’s U19 captain Harry Brook 48 not out. Trott trying his best to save Warwickshire’s bacon with 27 not out.

Oh, Glamorgan. Not a great start at Swansea: 52 for 5, 3 for12 for Tony Palladino. Worse news still, Khawaja is already out, for 5.

Another wicket at Arundel – Salt out for 130, a second wicket for Salisbury. Pope looking in gorgeous touch here at Guildford: 20 runs, all in boundaries.

Chaos at Tunbridge Wells, Warwickshire 35 for 4, with the unplayable, evergreen Darren Stevens causing mischief with 2 for 9. Trott, not out 13.

Tumult at Guildford: Another WICKET as de Bruyn looks to go inside out, skips down the pitch and whacks it to at extra-cover. A duck in his first innings in Championship cricket. Surrey 247 for 4.

Borthwick out for 83, bowled by Tim Groenewald, one that nipped back. A lovely little innings. Surrey 247 for 3.

And Worcestershire have been bowled out while I was looking elsewhere – Mitchell last man out for 118. Four wickets each for Clark and Mennie.

And they run a rare three at Guildford.

Hampshire v Yorkshire, Ageas Bowl. Day/night: Yorkshire 94 for 3 (Ballance 39 not out, Brook 34 not out.

And a hundred for Ross Taylor at Chelmsford, while Yorkshire have recovered to 80 for 3 thanks to Ballance and Brook. Leicester a steady 194, Ackermann 75 not out, and Kent all out for 197 amongst the rhodedendrums.

And that’s a super hundred for Daryl Mitchell who has led a great fightback this afternoon against Lancashire, Worcestershire 232 for 7.

Swept to the boundary second ball by Borthwick. Here ends the ball-by-ball commentary.

On the money first ball.

I really, really didn’t mean to jinx Tom Haines. Sorry Tom. Anyway, you got 124. Are Durham going to have their becoming-traditional two-days-bad, two-days-good match?

And replacing Dom Bess at the pavilion end we have Jack Leach… Surrey 212 for 2.

At Arundel centuries each for Philip Salt – thrust into the opening role because of injury – and Tom Haines, chucked in to the team this morning when Chris Jordan was picked off by the Lions. “Keep an eye on Tom Haines,” says Sussex expert Bruce Talbot, “he’s one to watch.” Sussex 253 for 1.

Mitchell helping the Worcestershire tail to a very healthy wag against Lancashire: he’s put on 45 now for the seventh wicket with Ross Whiteley.