We are taking lunch here, slightly late given there are 104 overs to be bowled in the day. Yorkshire are 176-7 with Jonny Bairstow unbeaten on 87. Five-wicket star Sam Curran was capped as the players left the field. It looks an absolute corker at New Road, where Essex are 266-8 at lunch, leading Worcestershire by 205. You wait ages for one defeat and then two come along once. Potentially, I stress, for the champions.

? What a way to top off a brilliant session for @CurranSM, he received his Club Cap, presented by Club Captain @roryburns17. #SpecialDay #3Feathers pic.twitter.com/4D6ahRxoEp

We have one result in around the circuit, with Lancashire beating leaders Nottinghamshire at Trent Bridge. Former Durham pair Graham Onions and Keaton Jennings were their stars with nine wickets in the match and a century respectively.

Speaking of Durham, in Division Two, they are 217-5 in reply to Derbyshire’s 417 at the County Ground. Graham Clark has top-scored so far with 63, but he’s out. Leaders Warwickshire are wobbling at 44-3 chasing 179 against Northamptonshire at Edgbaston – Ben Sanderson with all three wickets. Sussex will chase 270 to beat Kent at Canterbury, with that pursuit just about to start. Like at New Road, that looks a belter of a finish. The same at Grace Road, where Leicestershire are 191-7, leading Glamorgan by 204. At Lord’s, Gloucestershire at 107-3 replying to Middlesex’s 455/8 declared.

It’s been a romp for Somerset in an elongated session. Hildreth and Dom Bess, an imposter at No 10, added 145 together as the pitch ran out of malice and the Hampshire bowlers – with the exception of Fidel Edwards who kept steaming in to no great effect – ran out of puff. At lunch Somerset sit pretty on 472-9, a lead of 241.
Hildreth has been the more measured of the two. He knows how to capitalise. This was the 15th time he had passed 150 out of his 43 hundreds. Then in the last over before lunch on 184 he mishit a high full toss from Tom Alsop, a very occasional left-armer, to mid-on.

How fortunate for Somerset that they are unlikely to be deprived of Hildreth’s services once the Tests start, how unjust that he has never played a match for England, though he represented the Lions on a regular basis a few years ago. His self-deprecating manner may not have endeared him to the men that matter, I suppose.

We know the powers that be like the buzz and business of Bess, who will surely not bat in double figures again for Somerset. He has a first class hundred to his name for the MCC against Essex in Barbados in March. At lunch he was unbeaten on 84 and he may have the chance top register his first one for Somerset after the break.

With the sun out the demons seem to have departed so we expect plenty from Bess and Leach with the ball before long.

Yorkshire have lost two more quickly, Jack Leaning for 20 lbw to Rikki Clarke and Tim Bresnan caught at second slip off Sam Curran for one, to slip to 158-7, still 107 runs away from the follow-on target. Curran has five wickets, and Jonny Bairstow is still there on 76.

Warwickshire are 21-1 chasing 179 against Northamptonshire, while Kent have lost three morning wickets and are 198-7 against Sussex at Canterbury, leading by 232. Glamorgan are turning things around at Grace Road and have taken five this morning, with Leicestershire 158-7 and leading by 171. Michael Hogan has four-for. Here, Jonny ploughs on, although helped by a missed opportunity from Jade Dernbach (one-handed to his right) off his own bowling on 66. He has 74 of 154-5. Yorkshire need to reach 265 to avoid the follow-on. 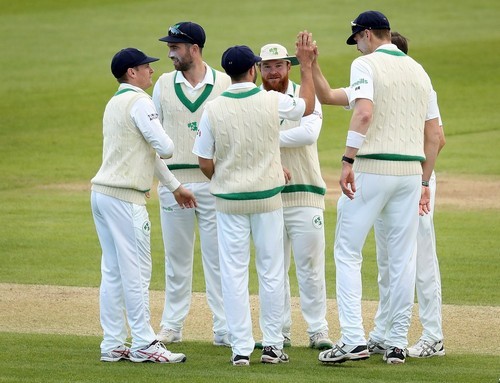 Pakistan have declared on 310/9. We’re going to have our first bat before lunch!#IREvPAK #BackingGreen pic.twitter.com/lz60IbC4oC

Jonny Bairstow reaches 50 off 46 balls with 10 fours, his second successive fifty after last week’s effort against the new ball in the second innings at Chelmsford. Is he England’s best batsman right now? Anyway, Yorkshire are 131-5. And Lancashire have won by an innings and 67 at Trent Bridge, bowling Notts out for 138 in their second innings. 6-55 for Onions and 4-26 for Anderson. That is Lancashire’s first away win in the Championship since July 2015 against Glamorgan at Colwyn Bay when Ashwell Prince and Alviro Petersen put on 501 for the fourth wicket – also an innings win.

Lancashire are on the verge of their first win, with Nottinghamshire having lost three morning wickets to slip to 127-8. They are still 78 runs in arrears, with Graham Onions completing a five-for. He has shared all eight to fall with new ball partner Jimmy Anderson, who has most recently trapped Luke Fletcher lbw for nought.

Greetings from Taunton, where Somerset are attacking the second new ball – there haven’t been many of those unwrapped here this season.

Jack Leach lost his off stump to the old ball, not playing a shot. Obviously he was trying to play too responsibly. Against the new one the runs have flowed. Hildreth purrs on and Dom Bess is not really a number ten. In fact the names of Somerset’s batsmen from 7-10 (mind you Groenewald at 11 is not so bad) could be put into a hat to sort out the order.

Just enjoyed a magnificent slice of coffee and walnut cake produced, if not cooked, by our press box doyen and host, Richard Walsh. What a fine start to the day.

I mentioned in the scene-setter that Doug Bracewell had to back up his first-innings 81 to give Northamptonshire a realistic chance of victory over Warwickshire at Edgbaston. Well, he’s gone for seven, caught behind off Olly Stone. Northants are 179/8, leading by 170. Here, Yorkshire are five down having lost Harry Brook, caught behind off Sam Curran for 17. They are 86/5, and Jonny Bairstow has 33 of them in typically pugnacious fashion.

Joe Root has gone to the day’s sixth ball from Sam Curran. He’s been trapped lbw playing around his front pad for 14 having faced the second half of the over. Jonny Bairstow joins Harry Brook at the crease, and Yorkshire are 41/4.

Saturday was a day for two centurions who are very much in the category of England hopefuls; Keaton Jennings for Lancashire against Nottinghamshire and Joe Clarke for Worcestershire against Essex. On Sunday, the current Test captain will hope to match them as Yorkshire bid to stave off a Surrey charge towards victory here.

Joe Root will begin day three unbeaten on 14 with his side at 40/3 in reply to Surrey’s 414. Jonny Bairstow is still to come as well, and the White Rose will need them both to perform. The general consensus is that this is a new ball pitch, so the first hour or so will be very interesting.

Both Jennings and Clarke, Lions team-mates, scored their second successive centuries. Jennings helped put Lancashire in control at Trent Bridge, with Notts 106/5 in their second innings and still 99 runs behind. That one could easily be done by lunch. It would not be a great surprise to see the left-hander named in Ed Smith’s first Test squad later this week. Clarke’s inclusion, surely ahead of James Vince if anything, would be a touch more left field. But why not?

His Worcester side just about have the edge against Essex, who will resume day three on 143/4 in their second innings with a lead of 82. Alastair Cook was out for 66 late on last night.

James Hildreth will resume unbeaten on 125 for Somerset (324/7) against Hampshire (231) at Taunton. England chance passed him by? Probably, yes, although many will put him in the unlucky bracket.

And finally, Division Two pacesetters Warwickshire are on course to win again, with Northamptonshire struggling at Edgbaston. They are 160/7 in their second innings with a lead of 151. New Zealand all-rounder Doug Bracewell is at the crease. If he can match his first-innings 81, they could be in business.