Cristiano Ronaldo has insisted he remains as ambitious as ever after completing his move to Juventus from Real Madrid. The 33-year-old was unveiled by the Serie A club on Monday evening after passing a medical earlier in the day.
“The nine years at Real Madrid were wonderful, but it’s a brand new step in my life, so I thank all the supporters with my heart,” Ronaldo said at a press conference. “But I have to focus on this next step. I’m looking forward to playing. I’m very motivated, concentrated and focused on that.”

“I’m going to try to show that I am a top player, as usual. I’m going to work hard in training … I am very ambitious and I like challenges. I don’t like to stay in my comfort zone. After the experiences in Manchester and in Madrid, I’d like to mark the history of Juventus.”

Ronaldo revealed he had chosen to join Juventus rather than head for one last big pay day in the Middle or Far East. “I’m here because it’s a brand new challenge for my career,” he said.

“It’s a big club and usually players of my age go to Qatar or to China, with all due respect, so coming to such an important and outstanding club at this point in my career makes me very happy. That’s why I’m very grateful to Juventus for this opportunity.”

“I hope I can give the best response on the field during matches, that’s what I can do. I hope I can take them to an even higher level.” PA

Here’s one of the key quotes again, a little tidied up. 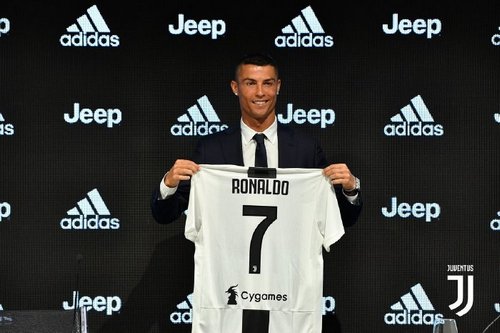 I’m here because it’s a brand new challenge for my career. It’s a big club and usually players of my age go to Qatar or to China, with all due respect, so coming to such an important and outstanding club at this point in my career makes me very happy. That’s why I’m very grateful to Juventus for this opportunity because I can go on with my career.

I told you he was good at this stuff. To be fair to CR7, he was giving the same spiel he previously gave in Spanish and Portuguese.

@JohnBrewin_ Hi John, why does it feel like Cristiano didn’t answer good ol’ @Paolo_Bandini’s question? It seemed to be about life in Italy, but he just went on about playing footie…

With that, a flutter of cameras, he is gone. “Grazie mille,” he says as he waves goodbye. He’s good at this stuff..

Cristiano Ronaldo closes out the news conference with a question from your very own Paolo Bandini.

I feel great, for me it is another challenge. I know it will be tough. I will be ready, Juve is ready. I will be there. The age is not important as I have said before. I feel motivated, I am looking forward to starting well.

Ronaldo sidesteps a question about Messi. “Of course, everyone is fighting for their own club and at the end we will see who is the best.”

“I have a four-year contract and I want the supporters to be happy with it.”

He is the asked about talking with former Real boss Carlo Ancelotti, manager of Real who he says he enjoyed working with but who is now a rival.

Juventus have given him a “wonderful opportunity”. He says he is “so proud they were interested in me” and hope he can take them “to a higher level”.

Ronaldo says he can win one more Ballon D’Or and not “two or three more”.

He says he will start training on the 30th of this month and start the season on August 12th in Serie A. That would seem to rule out his playing in this summer’s tour to American as part of the Champions Series.

“Si,” says Ronaldo bluntly when asked if Juventus was the only offer he received this summer.

He rather fudges his answer to questions about why he left Real Madrid, but he says he wants to show “he is not like the others” of his age. “I am not 23, I am 33,” he says with a smile.

Ronaldo says he hopes he can win the Champions League with Juventus, but that it is a trophy every club would like to win. He admits that one of the factors in joining the club is the standing ovation he got when being given a standing ovation on his last visit, when he scored that overhead kick.

On Serie A: “I know it’s a difficult and tactical championship. I like to have new experience. I don’t like to sit and look at my successes. I believe in my football, and my team-mates. And I am sure everything will be successful. I am very calm and sure of myself.”

He continues. “It (Real Madrid) was a very shining story but this is a brand new step. I thank all the fans for that. I have to focus on it and be motivated. I am going to work hard. I like new challenges. I hope everything goes well.”

Ronaldo says he is still “rather young” but does admit that players of his age usually got to “Qatar or China”. He says he will still be helping out the Portugal team.

“It’s one of the best clubs in the world. It was a well thought-out decision. My friends told me it was a club I could play in. That made it an easy decision. It is the best club in Italy.”

And here he is, taking centre stage in a press conference, with sponsors aplenty emblazoned behind him.

It’s a good point Rav makes. When was the last time that Italian clubs signed the world’s very best? Even though they are very different ages and circumstances, it reminds of Brazil’s Ronaldo signing for Inter Milan from Barcelona in 1997, or even before that, Barcelona selling Diego Maradona to Napoli in 1984.

Rav emails in. “I’ve followed Juventus for 20 years,” he says. “Covered them day in, day out, for close to 17 years and I’ve never seen anything close to this level of excitement or anticipation over a transfer in all that time. Nothing comes close to this deal, not ever the summer when we signed Ibra, Canavaro and Capello all in the space of a few months. It transcends football and it’s going to be massive, not just for Juventus, but Turin, Serie A and Italy overall. It feels like a throwback to the mid 90’s when players were flocking to Italy.”

The only unveiling I can recall with as much hype as this was Michael Owen joining Newcastle in 2005, the one where Sky’s Jim White showed up to compère the event.

Thankfully, Jim is in Isleworth with Dean Ashton this afternoon. 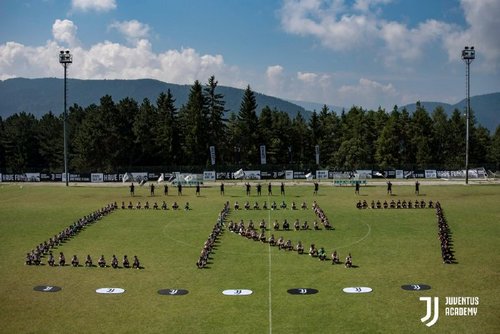 This was Paolo Bandini’s verdict when the deal was announced last week.

The Juve fans were getting hyped even for the medical this morning.

Ronaldo’s arrival and assumption of the number 7 shirt has displaced Juan Cuadrado in more ways than one, and the Colombian will wear number 49 next season.

Can the Old Lady turn it on like Real Madrid did for CRon in 2009?

They are calling it, of course, “CR7Day”. 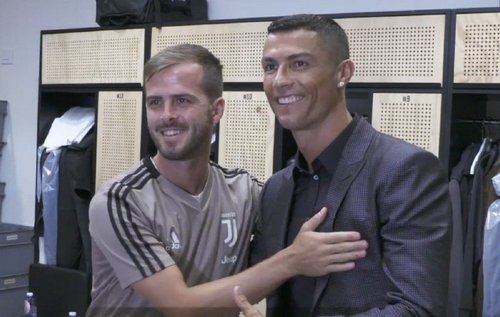 Time for @Cristiano to meet his new teammates! ??#CR7DAY pic.twitter.com/BCMCZen2aO

We can’t say he didn’t warn us, since in the immediate aftermath of his fourth Champions League title with Real Madrid, Cristiano Ronaldo had this to say: “Right now we need to enjoy ourselves but in the next few days I’ll give an answer to the fans who have always been by my side. It was beautiful to be at Real Madrid.”

A World Cup disappointment with Portugal and €100m later, he’s only gone and joined Juventus. Why? Perhaps he may give us some clues this afternoon, but all seemed to have gone sour at the Santiago Bernabéu, despite that ludicrous goal record and his spell at the club making sure Real will be the club to aspire to in terms of the Champions League for a long time yet.

His heading to Turin, a deal that was agreed and announced last week looks like great news for anyone who holds TV rights for Serie A or makes their living covering it, and bad news for the clubs competing with Juventus. It might be noted at this point that Ronaldo only won two league titles in nine seasons at Madrid, compared to the three he signed off from Manchester United with. Juventus have won the last seven, so winning a title in Italy to go along with England and Spain might have been an incentive.

What do we know of today? He has been having a medical, and the Juve tifosi have been out in force in Piedmont. A news conference awaits us, and no doubt some high-concept jiggery pokery.

Juventus supporters wait for their new hero in front of the new Juventus headquarters in Via Druento, Turin, Italy. Photograph: Alessandro Di Marco/EPA

Roman Abramovich is as involved in Chelsea as ever, says chairman Bruce Buck