At high altitude and amid even higher stakes, Lionel Messi produced a stunning individual display to drag Argentina from the brink of humiliation to the World Cup finals in Russia.

After only 38 seconds in Quito on Tuesday, Jorge Sampaoli’s side were on their knees – a goal down and with the prospect of missing football’s flagship tournament for the first time since 1970 growing with every second.

But in Messi, they have the small man for the very biggest occasion. For years the Barcelona forward has been plagued by accusations that his legacy will be dented if he fails to land a World Cup medal. On the back of this qualifying campaign, that looks further away than ever. 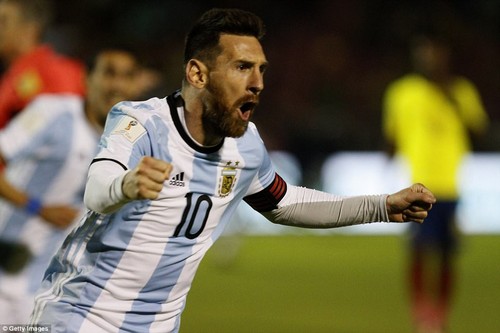 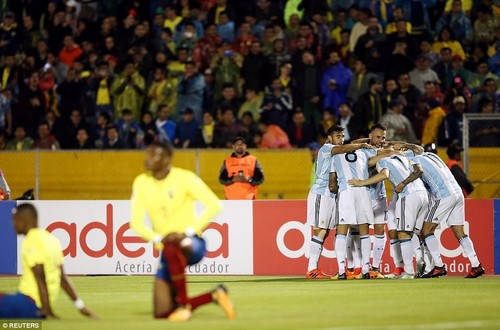 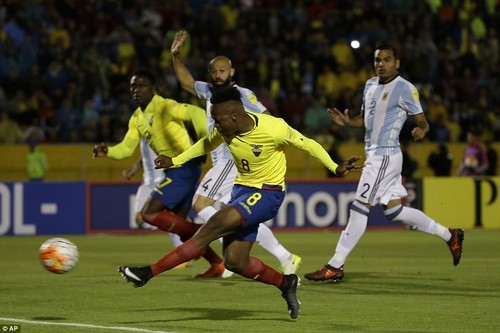 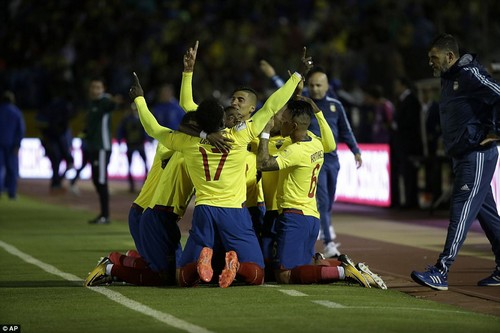 The home side celebrate their opening goal in front of the Argentina bench. Their lead was short-lived in a dramatic first-half 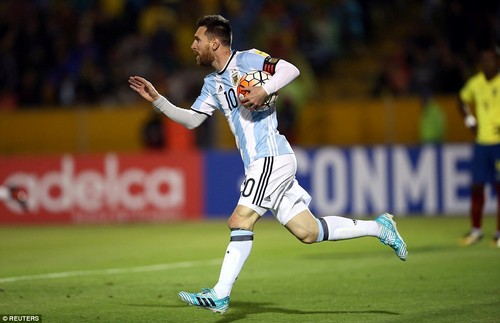 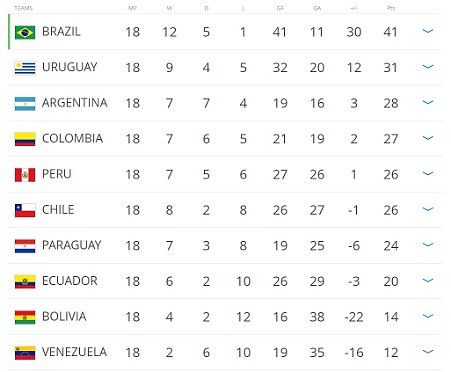 But three decades on from Diego Maradona’s heroics at Mexico 1986, the heir to his crown produced a messianic display to rival anything their nation has ever seen.

After Romario Ibarra had put Ecuador into a first-minute lead, captain Messi rescued his side with his fifth – and most vital – international hat-trick. The forward netted twice in eight first-half minutes to turn the game on its head before a wonderful chip after the break
secured the victory and their plane ticket to Russia.

Heading into the Quito clash, the situation for Sampaoli’s side could hardly have been more complex, yet so simple.

Before Tuesday’s final round of matches, Brazil were the only South American side to have secured qualification. Behind them six sides – separated by only four points – all held lingering hopes of qualifying for next year’s finals. 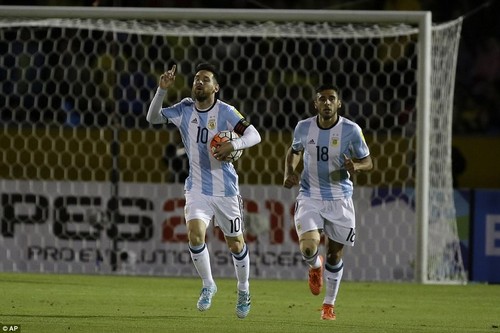 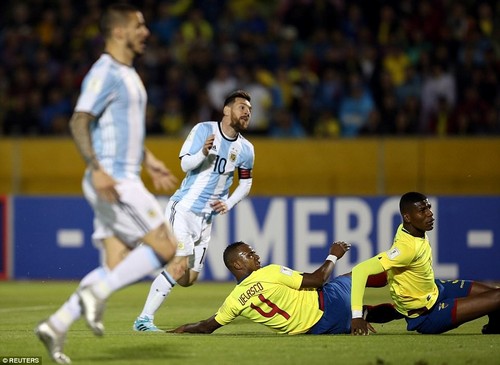 On 20 minutes, Messi had turned the game on its head, firing home from the edge of the box to put Argentina 2-1 up

Argentina began the night in sixth, their fate in their own hands. Messi and Co knew that only a win could guarantee a play-off spot, but even defeat could still be enough.

Within a minute in Quito, it appeared that may be their best hope. Little more than 30 seconds had passed when the visitors failed to deal with a simple long ball and paid the ultimate price.

After the ball made its way to Ibarra, the 23-year-old exchanged headers with striker Roberto Ordonez Ayovi, before firing past Sergio Romero from close range to score his second international goal in as many caps.

Argentina were shell-shocked. For Ecuador, there was pride and points to play for – everything but qualification on the line. They appeared liberated by the lack of pressure. The visitors, meanwhile, looked to be crumbling in its wake.

All except Messi, at least. On 12 minutes, the Barcelona forward hauled his side level, playing a neat one-two with Angel Di Maria before finishing coolly past Maximo Banguera.

And only eight minutes later the comeback was complete. Messi nicked the ball off Ecuador defender Dario Aimar Alvarez just outside the box before smashing the ball into the top left hand corner.

If Aimar Alvarez had provided a helping hand for the second, the third, which came shortly after the hour mark, was all Messi. Having picked the ball up outside the box, the forward skipped past Robert Arboleda and secured his 44th career hat-trick with a sublime chip from the edge of the box.

In 89 breathless minutes in the Andean foothills Messi had lifted Argentina from elimination to automatic qualification. And following Colombia’s draw with Peru and Brazil’s victory over Chile, Argentina had somehow finished a forgettable South American qualifying campaign in third. The great escape was complete. Next stop, Russia.

Simona Halep out of WTA Finals after Elina Svitolina loss