Amid confetti and chants of “equal pay”, New York City honoured the US women’s football team on Wednesday with a ticker-tape parade up the “Canyon of Heroes,” celebrating its World Cup triumph and hailing the players’ emergence as icons of women’s rights.

The squad’s 2-0 win over the Netherlands in the final match on Sunday capped a World Cup campaign that attracted vast television audiences, reflecting the popularity of a US football team that has dominated women’s international competition, winning a record fourth title.

But Wednesday’s parade up Broadway in New York’s financial district was more than a tribute to a championship team. It also cast a spotlight on the team’s fight for equal pay with the US men’s national team, and by extension, the issue of equal pay for equal work for women in general.

Thousands of well-wishers pressed up against metal police barriers to catch a glimpse of star players including, Alex Morgan, Carli Lloyd and Megan Rapinoe, the tournament’s top scorer and an outspoken team leader, as they rode on open floats along the parade route.

“This is how I want my daughters to see what women can do and what women should be,” said Gabrielle Blecher, 49, of Brooklyn, a mother of daughters ages 11 and 13, who took a break from her office job along the parade route to watch the festivities. 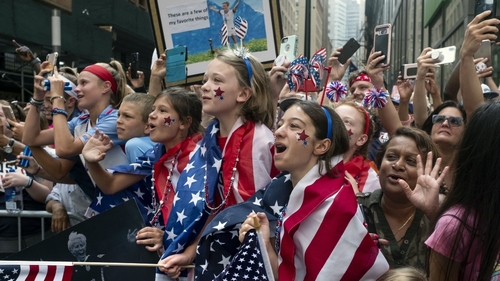 Olivia Ciampi, 15, of Rockaway, Queens, who joined the throng with her mother, agreed equal pay for the team was long overdue.

“They work so hard and they win so many titles and they really do so much and they deserve it,” she told Reuters News Agency.

In March, all 28 players on the women’s team filed a gender discrimination lawsuit against the US Soccer Federation, demanding equal compensation with their male counterparts, who earn much higher base pay than their female counterparts. 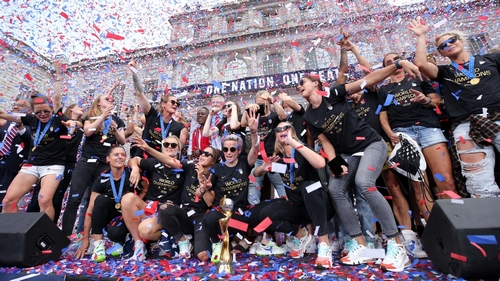 “We stand with them in solidarity. Equal pay for equal work,” New York Governor Andrew Cuomo told a press conference at the start of the parade, after signing into law an equal pay bill passed by the New York State Legislature this year.

Despite the controversy, a party atmosphere dominated. The crowd cheered as marching bands and women on motorcycles escorted the floats carrying the players, coaches and staff up Broadway to City Hall, a path dubbed “the Canyon of Heroes”.

At the end of the parade, Mayor Bill de Blasio presented the team with ceremonial keys to the city. 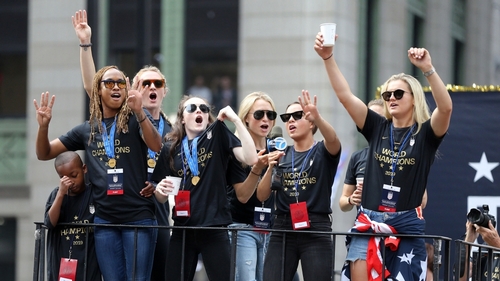 The ticker-tape parade is a New York tradition dating back to the 19th century. Past honourees have included Charles Lindbergh after his solo flight across the Atlantic Ocean; Neil Armstrong and other Apollo 11 astronauts after their mission to the moon; and South Africa’s Nelson Mandela. In recent decades, the honour has been reserved for championship teams, including the New York Yankees and New York Giants.

Despite the name, recent “ticker-tape” parades have been missing the ticker tape – the ubiquitous strips of paper that ran through stock tickers that once provided price quotes for Wall Street traders.

On Wednesday, about a tonne of confetti made from shredded paper was tossed from about 20 buildings, according to the Alliance of Downtown New York, the parade organiser.