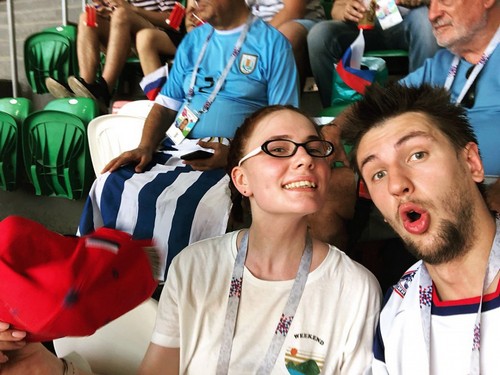 I went with my wife and father-in-law, it was his dream to visit the championship. Before the first match in St. Petersburg, flew for 5 rubles due to a reduced program of “Aeroflot” for the fans, getting to matches of our national team from any point of Russia. And then from St. Petersburg traveled to Samara for FIFA Train – free train journey from RZD. Clean, new, beautiful, fast and two-storey – the only negative, which is full of fans of one of the dining car a little, there was a constant sell-out and was out of food instantly, it is good that we, as experienced travellers, all took with them.

In Samara there was a heat in 35 degrees. Struck Uruguayans-fans – very cool supported the team and sang (we do not know how). Upset – free Shuttle-buses in Samara was driving in traffic jams: imagine a bus Packed tube inside +45 people became ill. It is strange that did not provide for a match to at least the normal fare.

By the way, about beer. About it already wrote all media, cities, the world Cup drink everywhere and anywhere, the police are loyal to it, But there is one “BUT”: if you’re Russian – you loyalty is declining, this is a turn. Although we had no complaints – we smiled and even tried to speak English. But for our police force was hurt. Moscow has had to watch as police at the entrance to the fan zone there was nothing I could say in English to foreign fans.

And in Moscow, the unofficial center of the world these days has become Nikolskaya street – there reigns a perpetual festival, in spite of everything, is very cool! Dances, anthems, drums, people from all over the world – amazing! And the restaurants there do a two-week revenue a day.

From the unpleasant moments – the separation of garbage, which are calling everywhere and anywhere, does not work. However, having regard to the organisation of events, I can say that the world Cup looks like the most difficult event in General, and Russia organized it on a very decent level.

Long story short, I got what I rode: a strong, positive emotions, a sense of the huge world of the festival. New stadiums, luxurious, great view even from the cheap seats behind the goal (I had a category 4 in Kazan on the match Spain – Iran and Moscow in the Luzhniki stadium in Denmark – France. In the Luzhniki stadium in General, almost under the roof). More powerful than the entire celebration was felt in Moscow, in Nikolskaya street, where fans of different teams have organized their own grassroots fan zone.

It is directly real football Woodstock: people walking, singing and dancing, make friends, fraternize, drinks, meets, falls in love, and we must assume that in March-April 2019 in Russia will be a new “children’s football”, as his time was a “kids Olympics”.

Pleasant: there is a feeling that this is the Russia that I like – open to the world, self-ironic, friendly, normal police, which does not seek to make everyone and ensures that was not a crime.

Of not sure nice or not: cities of the world Cup to the tournament, obviously, tried to put in order, the same Kazan was very impressed, and the contrast with her Novosibirsk seems pretty poor.

Of the unpleasant: the ticketing system was organized quite mediocre (it is the responsibility of FIFA), so the first matches were empty seats at the crazy excitement. Different security rules in different stadiums too upset Moscow in this sense, the most unfriendly city, according to the sensations.

I went with my wife to St. Petersburg for Iran – Morocco. It was the first match in the new arena. Impressions are not very bright. Came in 2 hours before the game and stood in a huge queue. The organizers were not technically ready to pass a crowd (62-64 thousand). For example, in our entrance No. 10 was only one scanner bags. In the end, missed the match for 15 minutes.

We were surrounded by the Iranians. They are positive on the street, but the stadium is extremely aggressive. Insulting rivals focagem, with shouts and gestures. It was unpleasant to sit in such an atmosphere. We were waiting for the feast, and came into conflict. At the end of the match when Morocco scored an own goal, the Iranian fans in a strong drunk was so happy that he fell on top of me and the wife. Greatly hurt. And when he stood up, then instead of an apology, ran to other Iranians to celebrate. He was nervous and drunk, everything is clear. But his compatriots around even did not lift a finger to give it a bream for such behavior.

But the fan zone in St. Petersburg very much. There is no negativity. Even during the game the fans of the opponents treat each other with respect. Cheer. Dancing, singing. The occasion. And experienced shame for the Spanish countrymen, who are everywhere trying to get through the queue. Watched this all over the place. The aliens just fell into a stupor and it was evident that not used to this.

Went to Volgograd for the game England – Tunisia. Before that, two days were in Moscow at the fan zone. Impressions are very positive! Rotor very hospitable when they learned that I came from Novosibirsk, immediately went for a beer. Took me out on bail, showed where tasty and budget you can have dinner/lunch as it’s much easier to get on transport. Your money wasted! The city is clean, the roads repaired. Surprised by any lack of migrants from Central Asia – never seen one! Prices in bars/restaurants are cheaper than in Novosibirsk, which was a pleasant surprise. Crime zero! Feel in absolute safety. A lot of police officers who behave correctly, they can not be seen and not heard. Do not interfere. Canned beer Bud in the fan zone better and tastier than that sold in Novosibirsk. The brewers tried for foreigners. The only negative – a huge number of midges. Volga. Heat. They say they were poisoned, but was a little confused.

Egor Egoshin (Creator and co-owner of the sports school)

Had three matches, including the opening in the Luzhniki stadium. As for the game itself, the football easier and more informative to watch on TV. But I went with my son to see with your own eyes the best players in the world and plunged into this atmosphere. And I have to say, what is most interesting is what occurs before the game, after the game and on the fan stands.

Very strong impression was made by fans from different countries. In our country I’ve never been in a situation where so many people of different nationalities in one place and all on the absolute positive: decorated, no aggression. All with each other are photographed, willing to help.

We came early to see what happens in the stands. This not seen on TV: how different people of different nationalities. We were, for example, in the match Germany – Mexico. The Germans were the entire game hands on my knees, and Mexican sector did not sit down, in my opinion, never.

Interestingly, FIFA specially placed fans in the country, and mixed, so that itself arises the same tolerance. We were sitting between the fans of the teams who played on the field. All talked, gave each other a beer, cuddled and continued to cheer for their teams.

Liked the organization. I was in the Luzhniki stadium, not only on this game, but, for example, at a U2 concert, and then we had an hour and a half wait to get out (rostrum produced serially). Here had no such problems. Had, of course, to wait in the queue for the toilets or for drinks, but for so many people it is inevitable. And it is also the opportunity to socialize with total strangers.

Overall, the atmosphere in Moscow is some other Russia: open, friendly, ready to come to each other’s aid. And I’d love to stay and after the championship. 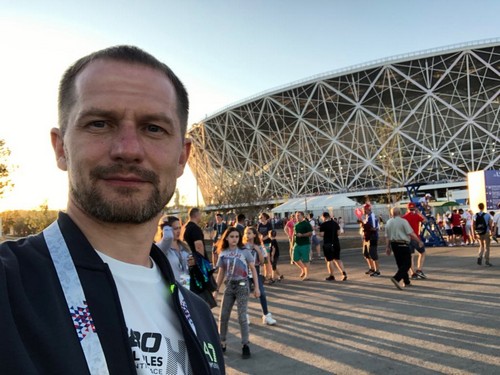 I highly recommend everyone to go at least a day or two in the city where the championship takes place, even if you have no tickets for any match. Just for yourself to feel this incredible atmosphere of celebration on a global scale.

Bobby Robson: the gentle master who remains a giant of English football