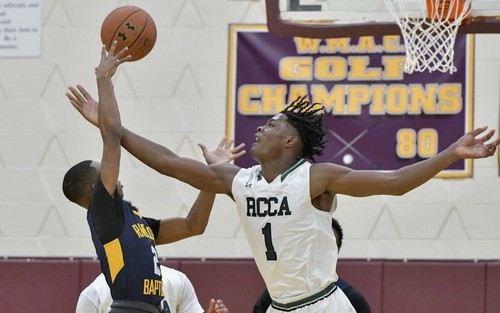 The Washington area’s top big man knows where he’s going to college. Jermaine Harris, a 2016 All-Met power forward from Rock Creek Christian Academy, verbally committed to Rhode Island on Friday in front of an assembly at the Upper Marlboro school.

The 6-foot-8 Harris is a four-star recruit and ranked 85th by ESPN in the Class of 2018. He had close to 20 scholarship offers by the middle of the summer, then whittled his decision to eight schools in July: Rhode Island, Xavier, South Carolina, Kansas, Maryland, West Virginia, Miami and Southern Utah, the first school to recruit him.

From there, Harris scheduled official visits to West Virginia, Rhode Island, Xavier, Kansas and Miami. But Harris only needed to make the first three trips – the Xavier visit coming this past weekend – to decide on a next step. His decision ultimately came down to Xavier, South Carolina and Rhode Island, and the Rams won out.

“They’ve been with me since Day One, even when I was a bad player,” Harris said. He took three visits to the campus in Kingston, R.I., and coaches visited the school numerous times since his sophomore year. “You could feel the connection with the players and coaches. It’s like home there.”

Now, Rhode Island is getting a modern big man who can stretch the floor and handle the ball. With his senior season approaching, Harris is working on his court vision and distributing the ball on the move. He can also score around the rim and, maybe most appealingly, is a versatile defender who can switch onto guards when facing a pick-and-roll.

“I would call him like a new-age forward, really,” said James Bryson, who coached Harris on D.C. Premier’s 17U team this past spring and summer. “If you sleep for a second, he’ll hit a jumper on you. If you try to go for the ball, he is going to put it on the floor and blow by you. There really isn’t anything that he can’t do on the floor, and he is only going to keep getting better.”

But it wasn’t always this way. Not even close.

When Harris got to Rock Creek Christian as a freshman, he had recently left his family in Augusta, Ga., and knew very few people in the Washington area. Harris was steered to Cole and the Eagles by a youth program led by the family of NBA veteran Jarrett Jack that seeks out educational and athletic opportunities for schoolchildren. Harris didn’t trust anyone when he arrived, Cole said, and the coach and lanky forward repeatedly butted heads over things big and small.

All Cole thought he needed to do was show Harris the benefits of hard work. He knew Harris shouldn’t be confined to the paint on both ends of the floor after an early growth spurt. Cole saw raw athleticism, a jump shot that could improve with a few tweaks and a player who understood the spacing and pace of a basketball game.

“He was probably the worst recruit I’ve ever had when he first got here,” Cole said. “And now, with all the hard work he put in, he is going to go down as the best player to ever come through this program. It just shows kids that you can do anything and get anywhere if you buy in.”

By the end of his junior season, Harris’s recruiting profile ballooned with a handful of major-conference offers. Kansas and Coach Bill Self joined the pack in June, cementing Harris as the area’s highest-recruited forward. He averaged 13.7 points per game and led the Eagles to a 28-4 record and a second-place finish in Maryland’s private school basketball tournament.

Harris and Cole were never worried about name recognition on the recruiting trail, even if Kansas does have a special ring to it. They focused on three factors while combing through schools: the weightlifting program, whether the school graduated its players, and if there was an opportunity for Harris to play right away. That led Harris to Xavier, South Carolina and Rhode Island.

The Rams, who last season snapped an 18-year NCAA tournament drought, had all three, plus a trio of players who went to high school in the Washington area: Michael Tertsea (John Carroll), Jeff Dowtin (St. John’s) and Stanford Robinson (who transferred from Paul VI to Findlay Prep in Las Vegas).

“I’ll be playing with some talented young guys,” Harris said after his announcement, hands still shaking and continually adjusting his gray and navy Rhode Island hat.

Before the assembly, he walked up to the lectern in the sanctuary and rehearsed his remarks, his voice dissolving into a hush as he neared the portion of his remarks when he’d announce his college choice. After he donned the Rhode Island hat a half-hour later, elementary school students rushed forward to take pictures with him.

When program organizers in Georgia told Harris, who was then in eighth grade, he had a chance to go up north to one of greater Washington’s best basketball schools, he saw himself in this moment as a major college basketball recruit, he said.

When he arrived at Rock Creek and immediately butted heads with Cole, that dream vanished, then slowly reappeared, as his skills and the coach and players’ relationship developed.