The embattled, contrite reliever received a warm ovation from the crowd. The Brewers finally ended up getting a win. 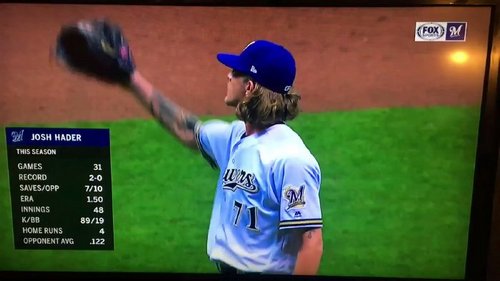 “It was nice to snap that streak. I feel like you just need … one just to get some positive vibe back on the team,” Yelich said.

For Hader, it was his first appearance since the reliever’s racist and homophobic tweets surfaced during the All-Star Game. Hader, who has apologized for the years-old social media messages, was applauded by the crowd after being introduced before the top of the seventh, with many fans at Miller Park standing.

The left-hander fanned four over two innings, striking out the side in the eighth.

“It means a lot, having the Milwaukee support, just knowing that they know my true character and just forgive me for my past, because that’s not who I am today,” Hader said.

Hader’s work highlighted five scoreless innings from the Milwaukee bullpen, though closer Corey Knebel provided a couple of nervous moments in the ninth.

Just the kind of big spot made for Machado, who was acquired from the Baltimore Orioles during the All-Star break. But Machado bounced out harmlessly to third to end the game, and Knebel got his 12th save.

The Brewers’ bats caught up to Kershaw in the sixth, when Yelich led off with a first-pitch homer for a 2-all tie. Another run scored on an error, and Keon Broxton added an RBI triple.

Kershaw (3-5) allowed seven hits and four runs in six innings, though only one was earned. He struck out five in taking his first loss since 25 April, a span of eight starts.

“I pitched OK. I can think of two or three pitches I want back,” Kershaw said.

Chris Taylor drove in the Dodgers’ two runs with a bases-loaded single in the first.

Wales ring the changes for summer Tests in US and Argentina