No miracle, then. Holland could not rise hup hup from the depths. The mission was impossible as the Dutch privately conceded it was after the previous round of games.

An attack led by Tottenham misfit Vincent Janssen could not plunder seven against Sweden, who serenaded their hosts with a lesser-heard “bright-side of life” chorus and move into next month’s play-offs.

They gave it a good go did Dick Advocaat’s team, especially in the first-half, blissfully free at last from the weight of expectation and with Arjen Robben producing a sublime reminder of his qualities.

But it ultimately wasn’t enough for the hosts, who fell five goals short of qualifying for a play-off spot in Group A

Sweden, despite the defeat, celebrate as they qualify for a play-off spot through a superior goal difference

But, on the night, the task was simply too great. This Oranje arrived pre-crushed, out of the World Cup before the party started and sparking a cascade of questions, not least who provides the techno in Russia.

Ultimately, they were ousted by losing twice to France (no disgrace there), once to Bulgaria and failing to punish the minnows from Belarus and Luxembourg.

Holland took four points Sweden, slide out on goal difference and no-one came to the Amsterdam Arena to vent their anger on the first Holland team to miss the World Cup finals since 2002.

Supporters cheered them over the line and applauded their efforts at the end.

Some came out of habit, head-to-toe in orange, as ever, and some came in tribute to Robben on his 96th and possibly final appearance for his country.

Robben has yet to confirm whether he intends to extend his international career but, at 33, the last of the Dutch masters still standing has earned a break from carrying this team.

The winger’s spot kick was just out of reach of Olsen in goal, who kicked his legs but the ball just squirted through 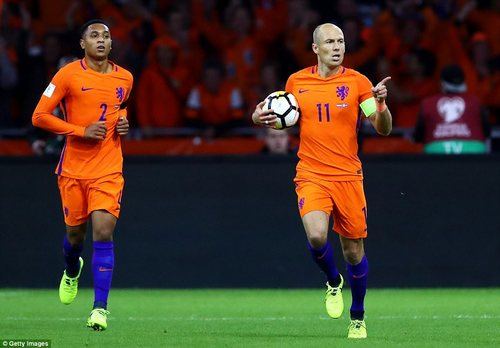 The 33-year-old then points to the dugout to signal that the work isn’t over, but it is an impressive start from the Dutch

And his lap of honour after the match with his children pointed towards a farewell.

He set out to lead with courage, demanding the ball and running at the Swedes, winning free-kicks and taking them all.

Robben missed the game’s first chance, heading over, before converting a penalty awarded when Manchester United’s Victor Lindelhof somehow contrived to kick the ball into his own hand.

Robben’s dink from the spot was not a clean connection but it found a way past goalkeeper Robin Olsen.

No-one came in expectation of a famous goal-rush but they saw their team having a go. “Roar like a lion, fight like a beast,” said one banner.

The damage was already done and the irony of an early goal by Luxembourg against Bulgaria did not escape those present.

Sweden’s eight goals against Luxembourg on Saturday put them in control of the runners-up spot in Group A.

They knew anything better than a seven-goal defeat would do and the healthy margin for error coupled with Holland’s frenzied mood of desperation seemed briefly to confound Jan Andersson’s team. 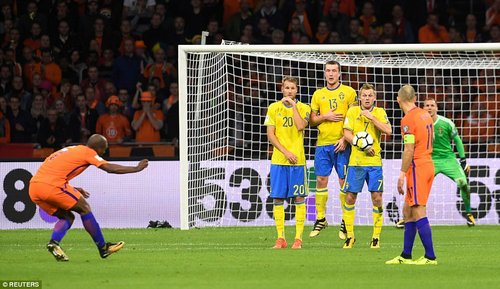 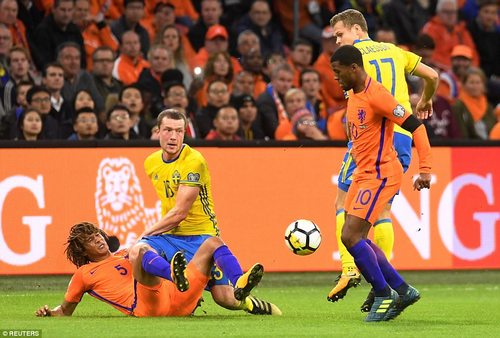 But it was Robben again who inflicted the damage, hammering home a stunning strike which flew into the Swedish goal 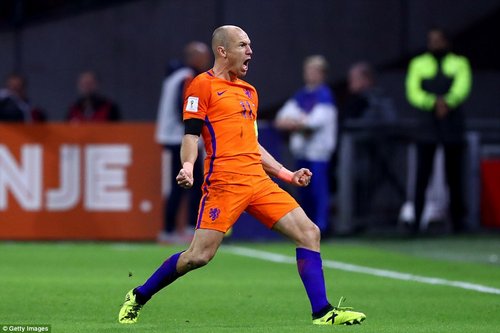 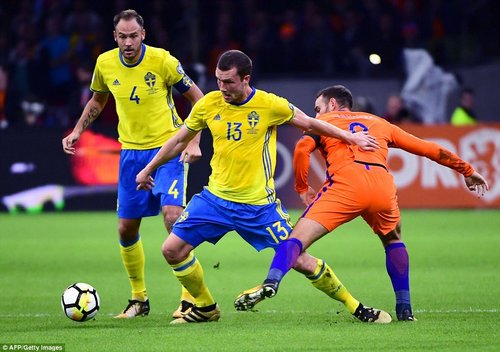 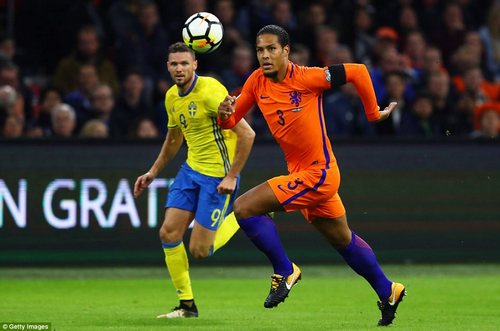 Kenny Tete fired over when he should have scored the second and Olsen kept out Ryan Babel and Janssen.

Five minutes before half-time and Robben pounced again, a wonderful first-time strike, flashed in at terrific pace from the edge of the penalty area with his left foot.

The goal was his 37th for Holland and hauled him level with Dennis Bergkamp. Only Robin van Persie, Klaas Jan Huntelaar an
d Patrick Kluivert have more.

It was two at half-time but it might easily been more – and more would have conjured a fascinating second-half.

Sweden returned with their composure restored, defended deep and did what they usually do so well, frustrate opponents with a well-organised back-four shielded by an equally well-organised midfield-four.

Optimism drained away and Dutch fans drifted away. For them it is over. For the Swedes, the thrill of a play-off date and the chance of their first World Cup appearance since 2006. 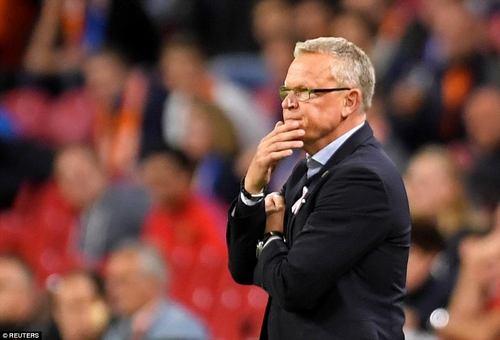 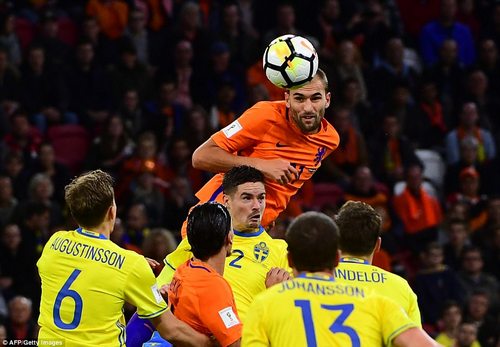 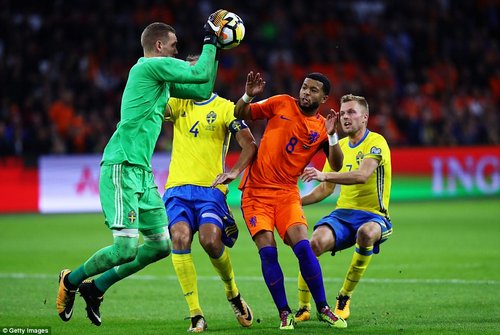 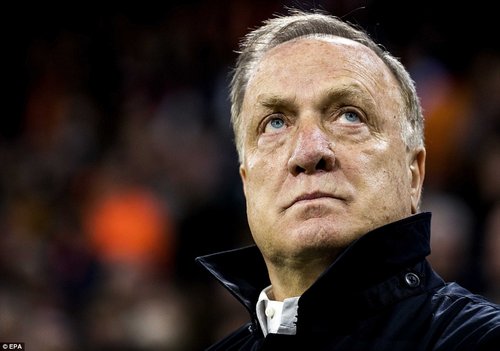 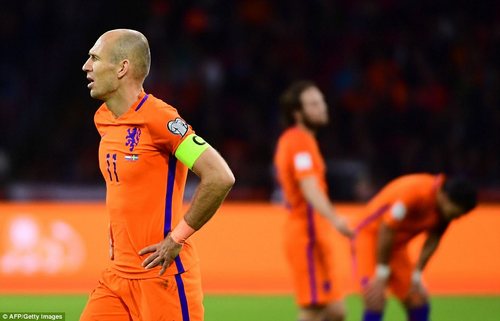 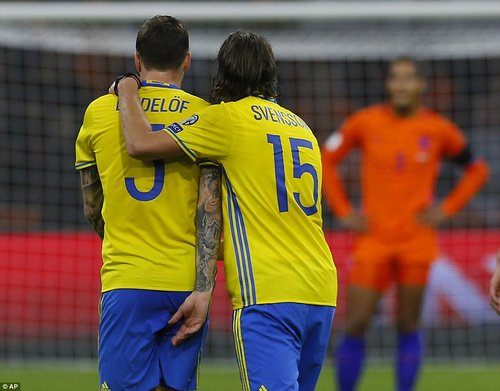 Lindelof and Gustav Svensson, in contrast, embrace and celebrate after the final whistle is blown and the Swedes qualify