Iran’s female football supporters have made history in Tehran – for the first time in 37 years they were able to attend a sporting event in the city’s Azadi stadium.

The usually strict ban on women attending sports stadiums was relaxed for a screening of Iran’s World Cup match against Spain, which was taking place in Kazan in Russia. 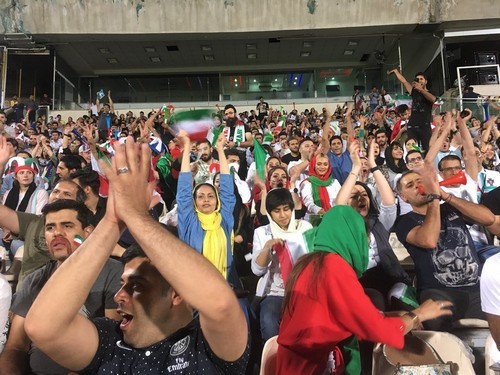 Women/families finally entered to Azadi stadium after 37 years of ban, to watch #IRNESP on screen. pic.twitter.com/oSBXHMWI8h

It had been hoped the ban would be lifted for Iran’s opening match of the tournament, but it was only for the team’s second game, which they lost 1-0, that women were able to access the ground.

OpenStadiums, a group campaigning for more access to sporting events for women in Iran, reported on the day of the match: “Last night after some confirmations, fans could buy tickets to watch on the screen in the Azadi stadium. Female fans are pretty excited to pass the Azadi’s gates for first time – but some are saying we can’t believe it until we enter in stadium.”

The event did not run completely smoothly – initially police were reluctant to let it go ahead and people were turned away, but the BBC Persian reporter Hadi Nili said an intervention by the interior minister, Abdolreza Rahmani Fazli, confirmed it could go ahead, leading to joyous scenes of celebration within the ground.

Iranian football supporters during the screening in the Azadi stadium in the capital Tehran. Photograph: Atta Kenare/AFP/Getty Images

After the match the Spanish captain, Real Madrid’s Sergio Ramos, tweeted a link to a report about the women watching the match, commenting: “They are the ones who won tonight. Hopefully the first of many.” He was less charitable about the Iranian team themselves, describing the way they played as “not football”. Ramos, a Unicef ambassador, also dedicated Spain’s victory to World Refugee Day on social media.

They are the ones who won tonight. Hopefully the first of many. https://t.co/ftnMwegZjz

Perhaps wary of officialdom at home, the Iranian team were more circumspect. Following their qualification for Russia, their team captain, Masoud Shojaei, said he backed a change, saying: “They should set a course that women are also allowed to come to stadiums in the future.”

But at an appearance at a World Cup press briefing in Russia on Tuesday he said: “To talk about this issue now would be disrespectful to the tournament. I prefer to solve our problems within our family and if we have the opportunity to talk about this later, we will.”

The involvement of female football supporters at this World Cup had already caused considerable controversy in Iran before the tournament kicked off. A large billboard in Tehran celebrating the team’s participation with the slogan “Together we are champions; one nation, one heartbeat” was criticised for only featuring men. It was subsequently changed to one that instead featured a scene of Iran’s players alongside male and female supporters.

Fans at Iran’s opening World Cup match in St Petersburg against Morocco last week also unfurled a banner that read “Let Iranian women enter their stadiums”. Regulations forbid political displays within stadiums during the World Cup, but a spokesperson for the organisers said: “The banners are considered by Fifa to express a social appeal, as opposed to a political slogan, and were therefore not prohibited.”

People supporting Iranian women holding a banner in the stands during the match between Morocco and Iran. Photograph: Themba Hadebe/AP

However, that appeared to hold true only for Iran’s first match. An Iranian women’s activist, Maryam Qashqaei Shojaei, said she was held for two hours by security officials at the Kazan stadium before Iran’s match with Spain, having planned to display the banner again.

“When I was trying to get in with my banner security told me I can’t take it in,” she told a Thomson Reuters Foundation reporter by phone from Kazan. “I showed them my approval. They searched me and held me two hours, and took the banner.”

A spokesman for Russia’s World Cup local organising committee said it was aware of an incident involving Shojaei, but had no further details.

World Cup Fiver: sign up and get our daily football email.

Despite Wednesday’s defeat to Spain, Iran still retain a chance of progressing to the second round of the World Cup for the first time in their history. It will not be an easy task though – they face Cristiano Ronaldo’s Portugal in their final game on 25 June in Saransk, with only a win guaranteeing their progress. Iran’s coach, Carlos Queiroz, who is Portuguese, said: “We are not shy, we go for it, we are really determined. We know it will be tough but we don’t come here expecting easy things.”

Some progress for female supporters off-the-field, however, seems a little more assured.