LeBron James had 26 points, 13 assists and 11 rebounds, JR Smith scored 20 points and the Cleveland Cavaliers beat the Toronto Raptors 113-112 in overtime on Tuesday night to win Game 1 of their second-round playoff series.

Kyle Korver scored 19 points, including the go-ahead 3-pointer in overtime after Cleveland never led in regulation. Tristan Thompson had 14 points and 12 rebounds for the Cavaliers, who have eliminated Toronto in each of the past two postseasons.

Toronto’s Fred VanVleet missed a three-pointer with 3.4 seconds to go in overtime that could have won it for the Raptors, who couldn’t hold on to a 14-point, first-quarter lead.

James’ game-tying fadeaway jumper over Toronto rookie OG Anunoby with 30 seconds left in regulation proved a dagger in the hearts of the Raptors, who came up frigid throughout the fourth quarter. 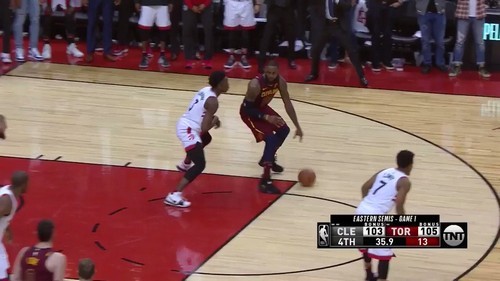 Clutch from The King! pic.twitter.com/OehPKHZOZ3

Jonas Valanciunas had 21 points and 21 rebounds, Kyle Lowry had 18 points and 10 assists, and DeMar DeRozan scored 22 points for the Raptors, who host Game 2 on Thursday night.

The Cavaliers beat the Raptors in six games in the Eastern Conference finals in 2016 before going on to win their first NBA championship. Last year, Cleveland swept Toronto in the second round.

Korver’s three early in overtime gave the Cavaliers their first lead of the game, 108-105.

Lowry’s three-point play made it 113-112 with 57 seconds to go and, after the Cavs were called for a shot-clock violation, Toronto had one more chance to win, but VanVleet couldn’t come through.

VanVleet was one of four Raptors to miss in the final seconds of regulation. Toronto got four looks at the potential winning basket on its next possession but missed all four, including a wide-open three by VanVleet, giving Cleveland the ball with 0.6 seconds remaining. Green inbounded to James, but his shot bounced off the rim.

This is the first game of LeBron James’ playoff career where his team got the win despite never leading during regulation.

The Cavaliers are the second team in the last 20 postseasons to win a game despite never leading in regulation (also Mavericks at Thunder on May 23, 2011).

The Raptors shot 5 for 24 in the fourth quarter, with Valanciunas missing six of seven attempts.

DeRozan scored 11 points in the first, connecting on five of eight attempts, and Lowry had eight points and five assists as Toronto led 33-19. James was 3 of 5 in the first but the rest of the Cavs shot 4 for 18.

James, who averaged more than 41 minutes in Cleveland’s first-round series against Indiana, checked out with 3:31 left in the first. With James on the bench, the Cavs scored two points the rest of the quarter.

Green and Smith each scored 11 points in the second quarter and the Cavs found their shooting stroke, connecting on 14 of 22 attempts. James had five assists in the period as Cleveland cut the deficit to 60-57 at halftime.

VanVleet took exception to a shove from James at the end of one play and made an attempt to get at the Cavs star, but was restrained by teammates.

Valanciunas had 13 points and eight rebounds in the third, but Korver scored 10 points and James had eight to keep the Cavs close. Toronto led 87-82 heading to the fourth.

Long before tipoff, Stephen Curry swished his routine tunnel shot on the second try. Once the game began, the two-time MVP stood along the bench anxiously waiting for his turn, shaking his legs and clapping his hands with nervous energy and anticipation.

Then – mouthpiece dangling, of course – Curry finally entered at the 4:20 mark of the first quarter to a roaring ovation from the Oracle Arena crowd and immediately got to work. He knocked down a three-pointer from the left wing 11 seconds later and was off and running in Golden State’s 121-116 victory over the New Orleans Pelicans on Tuesday night.

“The ball swung to him and he just launched. It didn’t surprise me. That’s who he is,” coach Steve Kerr said. “That was a fun moment.”

Curry came off the bench to score 28 points in a triumphant return from a knee injury and nearly six weeks off, and the Warriors held off Anthony Davis and the pesky Pelicans to go ahead 2-0 in the Western Conference semifinals.

All is right with the Warriors again now that No30 is back on the floor – even as a backup.

Kevin Durant scored 29 points with a huge 3-pointer with 3:10 to play, to go with seven assists and six rebounds in Golden State’s franchise-record 14th consecutive postseason victory at Oracle Arena. Draymond Green contributed 20 points, 12 assists and nine rebounds while battling Davis on both ends all night.

Davis finished with 25 points and 15 rebounds, and Jrue Holiday had 24 points, eight rebounds and eight assists for the Pelicans, who also got 22 points and 12 assists from Rajon Rondo.

Andre Iguodala converted a snazzy three-point play with 6:41 left when he flipped the ball up and it came back down and through the net as he was fouled by Rondo, then Golden State pulled away.

The best-of-seven series resumes with Game 3 on Friday at New Orleans.

Curry shot 8 for 15 with five 3-pointers and grabbed seven rebounds in 27 minutes. He let it fly for a 30-foot three in the closing minute of the third.

The Warriors were focused on keeping their edge after a blowout Game 1 win.

Just the energy Curry brings helped that cause.

The whole place came alive when he made his first appearance on the floor.

“That was a special moment when Steph checked into the game,” Kerr said.

Curry had been sidelined since spraining his left knee on 23 March, the same day he came back from a six-game absence with a right ankle injury.

He already had a history of brilliant returns from injuries.

In late December against Memphis, Curry came back after being sidelined 11 games with a sprained right ankle to score 38 points with 10 three-pointers.

Curry returned for Game 4 of the Warriors’ five-game Western Conference semifinals against Portland two years ago and made 16 of 32 shots with five 3-pointers and scored 17 points in overtime on the way to 40 in a 132-125 victory. He grabbed nine rebounds and dished out eight assists.

The game had its testy moments.

Curry made a bounce pass in transition to Iguodala late in the third and Solomon Hill was hit with a flagrant 1 for grabbing Iguodala’s neck area as he shot. That came 14 seconds after a double-technical against Davis and Green after they got tangled and rolled around and over each other.

“I live for playoff basketball. It’s the most fun time of the year for me,” Green said.

Green drove coast to coast for a three-point play 2:08 before halftime, then Thompson banked in a 3 at the halftime buzzer for a 58-55 Warriors edge at intermission.

Even a balanced Pelicans attack – they took 105 shots – with all five starters scoring in double figures wasn’t enough to stop the explosive defending champions.