Here’s our first-take match report. Robert Kitson’s copy from Bilbao will be updated in the file shortly.

The whole Leinster team sprint en masse to the Leinster fans behind the posts and celebrate wildly with them, popping champagne corks and belting out “campiones!”. 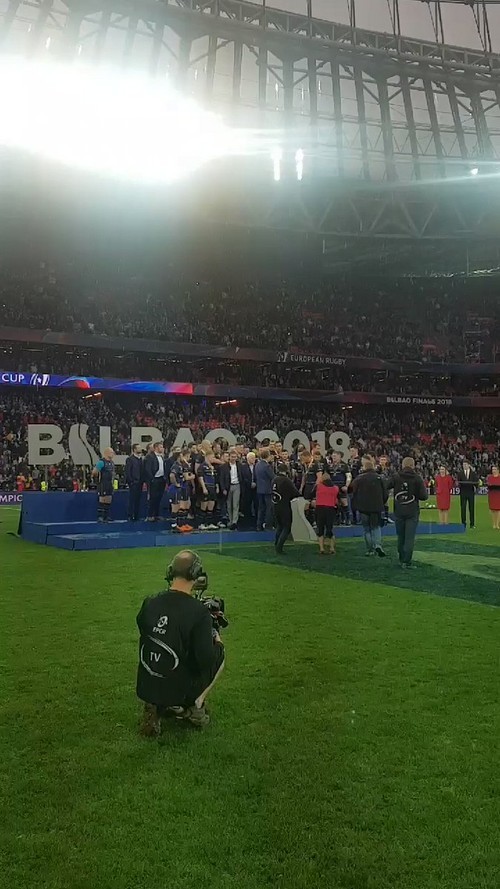 The captain, Nacewa, in his final season at the club, plants his hands on the trophy and then invites as many of his team-mates as he can to grab it with him, before hoiking it aloft! He kicked the winning points too! What a day for him.

Racing’s defeated players make their way up to receive their runners-up medals. Iribaren collects his with blood dripping down his forehead. What a performance he put in. And now it’s Leinster’s turn to pick up the European Cup.

Stuart Lancaster is enjoying getting hugs off whoever is within range of him. He looks delighted. His restoration as a coaching force feels like it is complete after his bruising experience at the World Cup with England.

Dan Carter, who was injured today and couldn’t play for Racing, says: “I’m really proud of the boys. We stuck in there for the majority of the game but we just made a few mistakes in the final five or 10 minutes. We play for each other like a family. You can see that from the way we were defending today. I’m really proud of what we have achieved this year.”

A crestfallen Donnachan Ryan speaks: “We thought we were in control with 10 minutes to go. A lack of communication in defence let us down. It was very disappointing. There are no excuses for that. Credit to Leinster. They haven’t lost a European game all season.” Kudos to Ryan for speaking so soon after such shuddering disappointment.

A delighted Johnny Sexton speaks: “Wow. We did it the hard way. We couldn’t get going at all. Every time we got into their 22 the ball was killed. They got out and slowed us down at the ruck. I can’t believe we’re champions again. I never thought it would happen three or four years ago. Stuart Lancaster has done so well since he has come in. The belief he has instilled in us.”

@GreggBakowski not a vintage Leinster performance but it doesn’t matter Kings of Europe again. Chapeau R92. Club champs of the NH. Happy days!

And that’s that! Racing played incredibly well – and worked so hard – against the heavy favourites but Leinster have won a record fourth European Cup, joining Toulouse as European royalty.

80 min: Racing drive forwards and get Talès within range – but under pressure he lets fly … and misses to the left. That is so, so cruel. But Leinster won’t care.

79 min: Racing steal back possession straight away. They have competed so, so well today. This is their last chance. Can they get to within range for a drop-goal?

Boom! Nacewa takes Leinster to within a minute and a half of a fourth European Cup.

77 min: Penalty to Leinster right in front of the posts! Leinster were building through the phases and offside was given against Racing. It’s going to be Nacewa to take it – in his last European game!

75 min: Vakatawa tries to steal the ball from Kearney in Leinster’s half and is penalised. Sexton finds touch and Leinster have a lineout on Racing’s 22. Nakarawa steals it but his good work is undone by Thomas, who trots out of play and gives Leinster another lineout.

Nacewa strokes it home with his right foot. His kicking hasn’t been great today but the captain showed his experience there and nailed it when it really mattered.

72 min: Leinster are stung by that and make good progress up the right, with Ringrose stretching his legs. There are some massive hits and then Iribaren is penalised for a no-arms tackle and Nacewa, not Sexton, is going to go for goal from a right-centre position from 35 metres. Sexton is perhaps feeling a hit.

He holds his nerve and sticks it right between the posts, cool as you like. What a game he’s having.

70 min: Racing set up a driving maul from a lineout on the right and make good ground. An infringement is given against Porter and Iribaren calls for teh kicking tee. It’s right over on the touchline, though.

68 min: But it’s turned over and Leavy is in like a terrier dog to pluck the ball away and hoof clear. Racing are on top here, though with just under 10 minutes remaining..

66 min: Gibson-Park, now at scrum-half in place of McGrath, whacks a ball clear. Racing pick up possession and gather in numbers on the right, where they scramble through gaps before Talès dinks a kick through to take Racing up to around 15 metres. Good pressure from Racing. Henshaw goes mano-a-mano with the huge figure of Vakatawa and forces Racing back a few metres. We’re through 14 phases and the French fans are in full voice.

65 min: Penalty missed! His left foot powers the ball towards the posts but it drifts this far wide of the left post. Will anyone turn this game to their advantage. We need some magic!

64 min: This is so tight. Utterly attritional. Racing make a few metres from a lineout but a high tackle gives Iribaren a chance to put Racing 92 in front with a penalty from 45 yards. It’s by no means an easy kick.

63 min: Leinster’s replacements are brought into action. Conan, Gibson-Park and Tracy are on for Murphy, Cronin and Luke McGrath. Meanwhile, Sexton is being treated for an unspecified injury. He should be able to continue though. Yes, he gets up and carries on.

61 min: Finally, Luke McGrath gets the ball in and out and Henshaw tries to carry but finds little room. Murphy has the ball dislodged from his arms but Leinster pick it up and Ringrose attempts to make some ground on the left … but the ball’s turned over and then Racing make a slapstick mess of kicking clear.

60 min: Leinster have a strong bench and their replacement have just got up en-masse to warm up. I tell you this as the scrum is being reset over and over again, which is all a bit tedious.

59 min: Chat mishandles and knocks on under pressure from Ryan inside his own 22. He’s then replaced by Avei and looks very disappointed with himself. It’s a Leinster scrum.

57 min: Penalty missed! Sexton’s kick drifts about a foot wide to the right. The length was good, though. But Leinster seem to getting on top now. They’re finding pockets of space now, where previously there were none.

56 min: Racing make three changes and Leinster bring Jack McGrath on for Healy. And then Leinster win a penalty for a no arms tackle. It’s all about the boot. And Sexton is going to try to put his side in front from all of 45 yards. Will Leinster take the lead?

55 min: There’s a huge hit from Gomes Sa on Murphy as Racing plough into Leinster from the kick-off. McGrath finds the touchline.

That was more like it from Sexton. He nails it straight down the middle.

52 min: The Leinster fans are willing their team on as they begin to show some skill in midfield, offloading swiftly and finally forcing a penalty. This time from around 35 metres out.

50 min: Leinster try the central route, Henshaw barging through a group of players, before Sexton boots long, pinning Racing back.

49 min: Penalty missed! Sexton, obviously trying to give that kick as much biff as he can, drags it horribly to the left.

48 min: Leinster win a penalty for an offside 10 metres inside their own half. Some backchat takes the penalty 10 yards forwards and Sexton opts to go for the posts.

46 min: Some housekeeping. Avei has replaced Chat, who has gone off for a head assessment.

From an angle just left of centre, the scrum-half sweeps it through the posts with his left foot.

44 min: Racing work through the phases earning only inches on the gain line – but then Arous spins cleverly and takes the ball to within five metres. Leinster’s defensive line is strong though. Racing switch play with some skilful hands and try down the right with Thomas but Leinster hold firm again. Advantage was given at some point through those 20 phases, though. Penalty!

42 min: But Leinster steal it and Healy bursts through a pocket before possession is turned over and Racing work their way forwards to the Leinster 22 metre line.

41 min: McGrath sends a box-kick forwards and Leinster win possession. Then Nacewa has a chance to kick and run on the left wing but the ball comes off his foot at a horrible angle and Racing win a lineout.

40 min: No changes at half-time. We’re off. Will it be another bruising 40 or will someone find their groove?

@GreggBakowski Leinster to settle into their routine after a big 10-15mins from R92 at the start of the 2nd half. Sexton to show why he’s the supreme 10 in the world right now & run his former paymasters ragged! Leinster by 9

Lewis Hamilton not thinking about world title at Mexico GP