Leonid Slutsky has clearly taken the city of Hull to heart.

The 46-year-old has largely become a fan favourite since taking over in the summer despite some disappointing results.

On Tuesday evening he again showed how he is embracing the Yorkshire city by attending the annual fair.

The former Russia head coach was pictured at one of the stalls in his Hull City training top.

Slutsky will be back on the training pitch with his players on Wednesday as his side prepare for Saturday’s trip to Norwich.

The Tigers are 17th in the Championship table, with 12 points out of a possible 33.

Slutsky took charge in June and was tasked with returning the Yorkshire side to the Premier League at the first time of asking.

He recently told Sportsmail that he would ‘sing, rap and dance’ if he got Hull promoted.

‘All of my focus is on Hull City. If you dream of the future then you can lose three matches in a row. Then you’ll be at home dreaming about a new job in League One,’ he was quoted as saying. 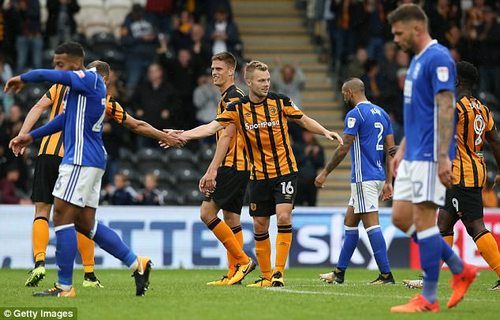 Pape Souare has shirt thrown back at him by fan