Lewis Hamilton has insisted he is putting the world championship title to the back of his mind despite being just nine points away from glory.

The 32-year-old Englishman needs to finish only fifth in Mexico City on Sunday to join an elite band of Formula One drivers to have won more than three championships. 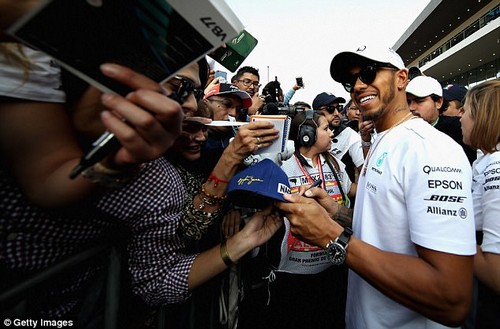 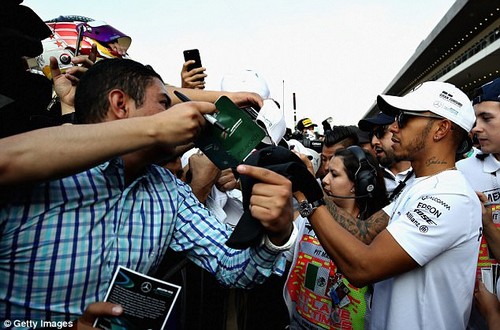 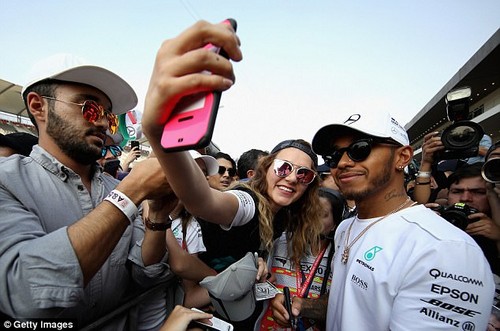 The Mercedes driver has been in sensational form since the summer break – winning five of the six grands prix – and has moved 66 points clear of Ferrari’s Vettel to stand on the verge of greatness.

But Hamilton, who spent the early part of this week in Los Angeles following his success at the United States Grand Prix before travelling down to Mexico City on Wednesday, has refused to get caught up in the drama of sealing a fourth crown.

‘I’ve not really thought about it to be honest,’ Hamilton said. ‘I am not really sure why.

‘I have just been enjoying the moments from the last race and the great response from the team. I have been focussing on doing the same again.

‘I am planning to do all I can to win the title, but I have no expectations. I just plan to drive as well as I can and I hope it turns out all right.’

The outcome of this year’s title race was almost impossible to call before Vettel’s campaign imploded in the Far East.

The German failed to finish two of the three grands prix, crashing out in Singapore before retiring from the race in Japan with an engine failure.

A defiant Vettel, however, insists he has not given up on trying to stop Hamilton from winning the championship and wants to finish the season in style.

‘Firstly, it is not over,’ Vettel, who hasn’t won a race since July’s Hungarian Grand Prix, said. ‘Obviously it is not as much in our hands as we would like it to be, but overall it has been a good year.

‘The real pity was that there were a couple of races where we just were not there to fight and we didn’t have a chance to fight. They got away for us and we were just sitting on the sidelines so that was bitter.

‘We still have a chance – we want to win the last three races and I think we can – so that is our goal and we will see what happens.’

Paulinho leaves Barcelona after one season to rejoin Guangzhou Evergrande