Liverpool have been dealt a major injury blow with the news Sadio Mane has injured his hamstring on international duty with Senegal and is out for six weeks.

Mane, who has three goals in four Premier League games so far this season, was substituted off after 89 minutes in Senegal’s 2-0 World Cup qualifying win over the Cape Verde Islands on Saturday.

The first match he misses is at home to Manchester United in Saturday’s early Premier League kick-off. The six-week time-frame rules him out of seven Liverpool matches. 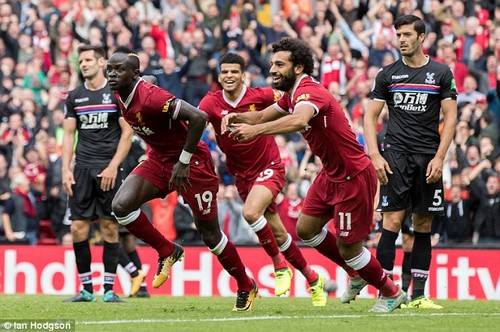 Mane is an integral part of Jurgen Klopp’s setup at Liverpool and his absence comes with the German under pressure to galvanise the team after an underwhelming start to the season.

Liverpool are seventh in the Premier League with 12 points from their first seven matches and have drawn their first two Champions League games.

The 25-year-old Mane has already missed three Premier League games this term after being shown a straight red card for catching Manchester City goalkeeper Ederson with a high boot in last month’s fixture.

Liverpool have notoriously struggled without Mane since his £34m switch from Southampton in 2016.

In the 15 games overall that he has been absent for, they have only won six.

His extended absence could pave the way for Alex Oxlade-Chamberlain to feature on a more prominent basis since his £35million move from Arsenal in August.

The England international has made seven appearances since arriving at Anfield but only started the 2-0 EFL Cup defeat by Leicester.

Klopp has other alternatives to choose from until Mane’s estimated return in late November.

Strikers Daniel Sturridge and Dominic Solanke will also vie for a starting berth in Mane’s absence, while Klopp may instead choose to deploy Philippe Coutinho higher up the pitch alongside Roberto Firmino and Mohamed Salah against United at Anfield.

Didn’t Wake up tomorrow, the