The wife of Lucas Glover is facing a domestic violence charge stemming from an altercation with the former US Open champion and his mother after he missed the 54-hole cut at The Players Championship.

Krista Glover was arrested on Saturday night and taken to the St John’s County Jail. She was released the next day after posting $2,500 in bonds. She faces a court date on misdemeanor charges of domestic violence battery and resisting arrest without violence.

According to the offense report, Glover and his wife had an altercation after the third round of The Players Championship, where Glover shot 78. The report said that when his mother, Hershey Glover, tried to intervene, Krista Glover began attacking her. The arresting officer noticed cuts and blood on the arms and clothing of Glover’s mother. Hershey Glover also told the deputy she had been hit in the chest. 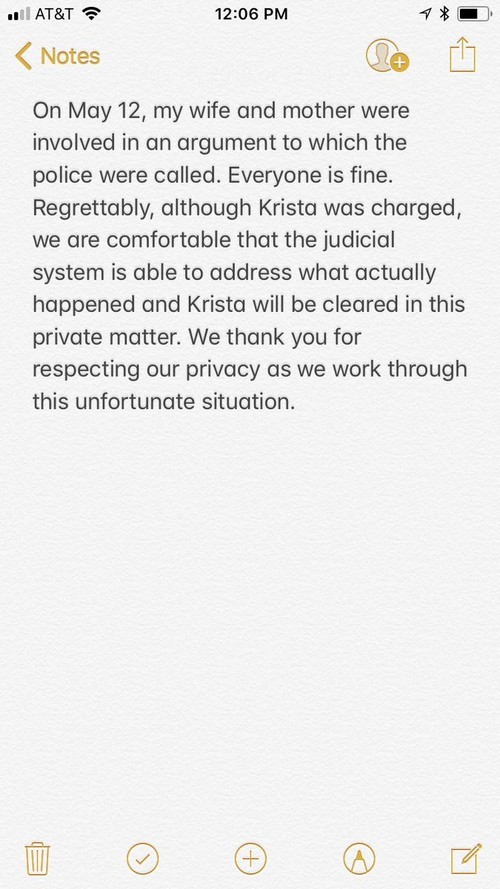 Glover confirmed on Twitter there was an altercation. “Everyone is fine,” Glover said. “Regrettably, although Krista was charged, we are comfortable that the judicial system is able to address what actually happened and Krista will be cleared in this private matter.”

The sheriff’s report said Glover’s mother declined to pursue charges, and added that Glover told the deputy his wife often starts arguments with him after he plays poorly. According to the report, Glover’s wife resisted being placed in the back seat of a patrol car and damaged the door by repeatedly kicking it.

Glover has three PGA Tour victories, including the 2009 US Open at Bethpage Black. He also has played in the Presidents Cup twice.

“We are aware of the situation and Lucas informed us of his statement, which has since been posted to his Twitter account,” the PGA Tour said in a statement. “Of course, we are here to provide support to Lucas and his family if needed; however, we are also respecting their request for privacy during this time.”

The German national team, arrived in Moscow for the world Cup