On Sunday evening in Moscow began the 64th match of the world Cup – in the final meet national teams of Croatia and France. This tournament had so many surprises, and therefore not necessary to name the favorite in this decisive confrontation. Let’s enjoy football together! 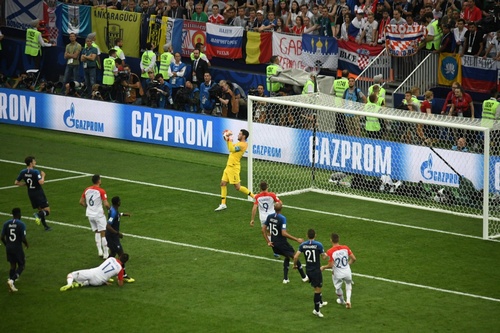 In the fan zone in Yekaterinburg the French team is very strong support.

Rakitic beats from afar, but much above the gate. It seems that the French a second time to become world Champions.

See how many of the stewards along the field are. How could they miss four players on the field?

By the way, we published the story of the steward on how they were prepared for this work and emergency situations.

Head coach of France Didier Deschamps could become the third person in the history of football, which has conquered the world Cup both as a player and as a coach.

Croats don’t give up: Mandzukic cool shot, but just wide of the post.

Croats still have time to equalize. Of course, this option is unlikely, but anything can happen.

The fans in Nizhny Novgorod do not hide that they are sad to part with the world Cup. So just enjoy the moment for what football has.

Run on the field people in uniform were members of Pussy Riot. On their Facebook page they wrote that it was the action “the Policeman comes into play”. They demand the release of political prisoners, the cessation of arrests at rallies, and the likes, not to fabricate criminal cases.

The field ran four. All very quickly overpowered and led away from the field.

Mbappe cool shot from outside the penalty area. The goalkeeper of the national team of Croatia just did not see this opportunity as a review of him blocked the View.

Assist attack began Mbappe, who burst into the penalty area, gathered for three players, and then transfer Grisman, the ball falls to the Field, the strike is blocked by a defender, but the second hit is accurate!

Oh, what a goal Pogba!

Judging by what the players show on the field, the crowd of fans came to the fan zone throughout the country is not in vain.
Fan zone in Rostov-na-Donu

Two fans wanted to take part in this match that they are not kept and ran onto the field. They are quickly tied. Unfortunately, the match to end to watch they can’t.

What is the speed of Mbappe! Not every Russian train travels so fast. Mbappe managed to break into the box, shot with the right foot, but, though on the spot!

While our photographer Artem Ustyuzhanin works as good as the team play! In the lens got all three goals.

The goalkeeper of the French that’s it! Lloris played superbly with his chest outside the box.

Actor Steven Seagal, which in 2016 received Russian citizenship, too, is watching the world Cup final at Luzhniki. As already a joke in social networks, for the security at the stadium you can be sure ?

How cool shot Rebić, but he reached out with his left hand to the ball.

The second half began. That would have three goals.

The first half ended. How cool is that in football there are at least two. Such a match I want to watch and watch!

The Croats almost scored from a corner, but after hitting Types the ball flew just over the bar.

Croats do not give up! Modric hung, the same Perisic struck his head. Defender of the French recaptured, but faster on the rebound was Lovren, who famously struck. But without a goal.

In response to the attack the Croats had almost equalized, but the player this team badly hit the ball.

Griezmann cool shot the goalkeeper jumped to the left corner, and the ball flew to the right. Finalise! Three goals already!

Yes! We judge both know the rules of the game. From the penalty spot.

The judge ran to see the replay. Now we find out how the author of this online knows the rules.

The French believe that the Croat played a hand in the penalty area. Clear penalty!

The Luzhniki stadium is Packed! The bleachers are buzzing!

Perisic – beast! He equalised with a classy strike from distance. What a match!

The first yellow card in the match – Kant shot down all the same perišić.

It turns out that this is the first own goal in the history of world Championships. Made history Mandzukic!

Another own goal, by the way. Griezmann curled the ball towards goal, but Mandzukic cool clipped head the ball into the upper left corner. Unfortunately, their goal.

In the 19th minute, the French opened the scoring.

The French are a bit accelerated, the Croats immediately became harder to defend.

Again Perisic was able to pass on the left flank, but the transmission gave bad.

Perisic nearly went one on one with Lloris, but failed to control the ball.

The French, yet only once were the Champions of the world – exactly 20 years ago.

It seems that the Croats made a bet on a quick goal.

While Croats are more active.

That’s how ended our vote.

Very different from the fans in the fan zone in Yekaterinburg.

Sound anthems of the countries.

On the field ruled the world Cup!

It since 1974, are the winners of the FIFA world Cup. First head over it raised great the Germany captain Franz Beckenbauer.

The prize was carried out according to the sketch by the Italian sculptor Silvio of Gazzaniga. Cup height 36.5 cm made of 18-carat gold weighing 5 pounds and has a base diameter of 13 cm contains two layers of malachite. The prize weighs 6,175 pounds.
Supermodel Natalia Vodianova and former captain of the German national team Philipp Lahm

Rousing the fans in the fan zone of Rostov-on-don.

That is what is happening in Paris and Zagreb!

Ceremony something like that myself. Wanted more lyricism and sadness.

A lot of fans gathered in the fan zone in Yekaterinburg. It’s like playing the Russian team ?

Most of our readers are confident that we will win the Croatians, but the advantage is negligible.

The closing ceremony of the world Cup in Russia. Stadium “Luzhniki”.

By the way, the teams are already known.

Small autograph hunters snuck into the training of the national team of France. They were so nice, that they could not refuse.

In “Luzhniki” was launched on the closing ceremony of the world Cup. Exciting!

See what conditions you have to work for photographers.

And these photos from the closing of the fan zone in Yekaterinburg. Soon there will stream the official closing of the world Cup in Russia, and then will show the match between Croatia and France.

“Luzhniki” – beautiful! Many of the spectators in the stands.

Teams are warming up.

A few words about the world Cup in Qatar. It is planned that it will be the most expensive in history. All will spend 220 billion dollars! This is eighteen times more than was spent to Russia.

The entire sports infrastructure is placed approximately $ 10 billion. The rest is new roads, a complete network of railway transport, which is created from scratch, hospitals, airport and even a new city to host the world Cup final.
40-thousand “al Wakrah”, which is built on the project of Zaha Hadid, who died in March of 2016

The most expensive project the world Cup in 2022 – the city of Lusail, which will host the opening match of the tournament and the final. The construction of the city, which is located in the desert about 20 kilometers from Doha, began in 2006 with the preparation of empty land. When Qatar in 2010 won the world Cup, there was not a single building. In 2022 there will be the biggest stadium of the tournament by 80 thousand spectators.

Specially for the world Cup in Qatar to build a subway for $ 18 billion. All will be 74 TV stations in four branches.

Fans at the world Cup before each match, pleased with his costumes and makeup. The finale, of course, is no exception

Our photographer Artem Ustyuzhanin met in “Luzhniki” city Manager Ekaterinburg Alexander Jacob. By the way, the day before he had celebrated the 60th anniversary. Visit world Cup final – a great gift for yourself. Happy birthday, Alexander Edmundovich!

Alexander Jacob came to the finals with his son. After seeing our photographer, the city Manager was genuinely surprised

At the Luzhniki stadium a few hours before the match already gathered fans and journalists.

To the world Cup finals are ready and in space! Today, the astronauts working on the ISS, played football in zero gravity. Yekaterinburg cosmonaut Sergei Prokopiev took an active part in the game and even tried to send the ball into the makeshift gate a head, but goalkeeper rescued him.

In the Kremlin took place the ceremony of transfer of authority of Qatar to host the world Cup in football. Vladimir Putin gave the red-and-white ball with symbols of the 2018 FIFA world Cup the Emir of Qatar, where the world football championship will be held from 21 November to 18 December 2022.

You for whom today will be cheering for?

Loginto rateSurvey completedYou have successfully voted! The results will be published at the end of the survey.

Sorry, your browser is severely outdated and does not support a vote

On his Facebook page the President of Croatia Kolinda Grabar-Kitarovic posted a video in which he thanked Russia for organizing the world Cup and called everyone cheering for the Croatian players. All this she said in Russian. Look how great she is: