The Manchester United man faces two weeks out with an injury to his medial ligament in his left knee, meaning he will miss his club’s clash at Liverpool on Saturday at a time when the Red Devils are already without Paul Pogba and Michael Carrick.

As well as the game at Anfield, Fellaini is set to miss United’s away games against Benfica in the Champions League, Huddersfield in the Premier League and Swansea in the Carabao Cup. 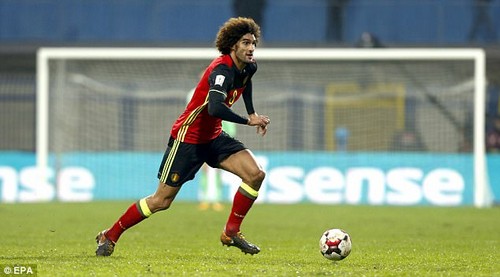 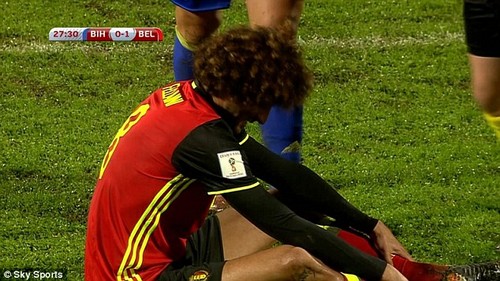 The official Twitter account of the Belgium national team confirmed Fellaini’s injury on Sunday morning, writing: ‘@Fellaini is out for a couple of weeks. Scan (on) left knee injury (MCL sprain). Get well soon Marouane!’

The pitch in Sarajevo was very muddy after two days of heavy rain, and the Belgians believe that contributed to Fellaini’s injury.

‘The pitch was dangerous,’ said De Bruyne. ‘But we knew that on Friday. We had trained and we knew what was waiting for us. 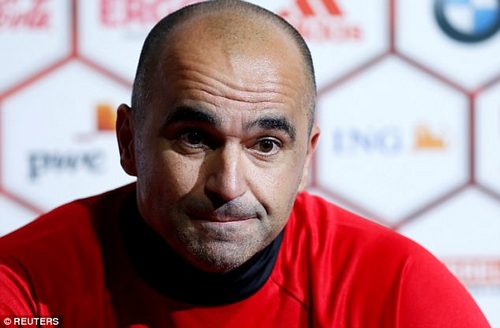 Belgium manager Roberto Martinez has confirmed the injury to Fellaini

‘I can understand that they are not going to be happy in England when they see that match on TV. But it is what it is and you have to play.’

Martinez also declared Romelu Lukaku fit for Belgium’s World Cup qualifier with Cyprus on Tuesday after the striker recovered from an ankle injury.

‘Romelu Lukaku is fit,’ said the Belgium boss. ‘We are in touch with Man United’s medical team. I haven’t received a phone call from Jose Mourinho as yet.’ 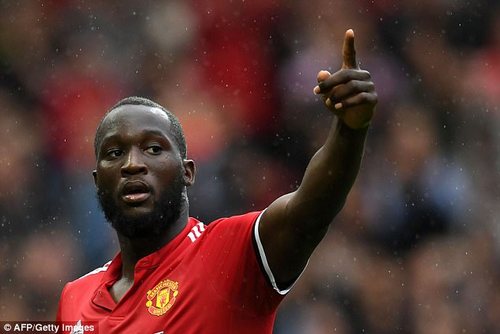 Gymnasts have become the Champions