Newly freed rapper Meek Mill, little more than one hour after his release from incarceration on a decade-old drug and guns conviction, rung the ceremonial bell amid a thunderous hometown ovation before the start of the Philadelphia 76ers’ series-clinching win over the Miami Heat in Philadelphia.

Sixers co-owner Michael Rubin posted a picture of himself with Mill on Instagram Tuesday night with the caption “On the way to the sixers game let’s go”.

The Philadelphia-born artist, whose given name is Robert Rihmeek Williams, was freed from the state prison at Camp Hill shortly before 7pm and took off in a helicopter from the facility outside the city. 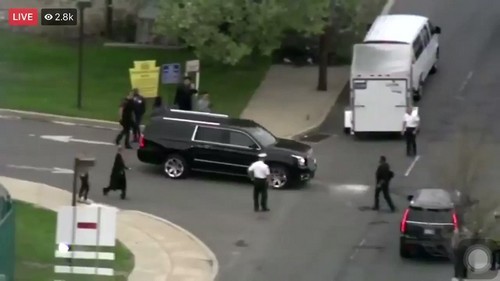 They came and got Meek Mill in a helicopter ???#MeekFree pic.twitter.com/URKbgTkAjQ

He visited privately with the Sixers in their locker room before emerging from the tunnel to rapturous applause shortly after 8pm at the sold-out 20,478-seat Wells Fargo Center for the ceremonial pre-game ringing of a Liberty Bell replica, a newer tradition in south Philadelphia reserved for local luminaries that’s been embraced during the team’s rapid – and long-anticipated – ascent from the NBA cellar.

They used to pray for times like this, indeed.

Wearing a Joel Embiid jersey, Mill took in the game from courtside beside Rubin, Pennsylvania governor Tom Wolf, Philadelphia Eagles owner Jeffrey Lurie and comedian and fellow Philly native Kevin Hart. The high-stakes playoff tilt would become a impromptu celebration of his body of work: Throughout the night Mill’s songs were played on the arena sound system during timeouts and breaks in play.

The red-hot Sixers won 104-91 over the Heat to clinch the first-round series, four games to one. Embiid finished with 19 points and 12 rebounds while Ben Simmons had 14 points and 10 boards.

“Just having someone that looks out for us, all of us here, it would just mean a lot for him to be back in Philly, in the city of Philadelphia with the fans, especially with a game like that tonight,” Simmons said.

The Pennsylvania Supreme Court had directed a Philadelphia judge who had jailed the Maybach Music Group rapper to immediately issue an order freeing him on bail while he appeals drug and gun violations from a 2008 incident.

Mill was sentenced in November to two to four years in prison for violating probation.

While he was incarcerated, celebrities including Rubin and New England Patriots owner Robert Kraft, visited him and pledged their support. Several of the Sixers made visits, too, including Embiid, Simmons and Markelle Fultz.

The case became a flashpoint for criticism of the criminal justice system’s treatment of African Americans, prompting outcry from high-profile critics including Kraft, Colin Kaepernick and Jay Z, who wrote an op-ed for the New York Times decrying Mill’s case as a high-profile example of an institution that “entraps and harasses hundreds of thousands of black people every day”.

The Sixers, who finished an anemic 10-72 only two seasons ago, jumped to 52-30 this year and have now advanced out of the opening round with a win before a crowd only further electrified by the night’s improbable aperitif. The club has won 19 of their last 20 games dating back to mid-March including 16 straight to end the regular season, breaking a 68-year-old NBA record.

Awaiting them in the best-of-seven Eastern Conference semi-finals will be either the Boston Celtics or Milwaukee Bucks. (The Celtics lead three games to two after Tuesday’s 92-87 win in Boston.)

The 30-year-old rapper was already beloved in a city fiercely protective of its artistic own, but the affinity has taken on a talismanic hue in recent months since the Eagles adopted Mill’s Dreams and Nightmares as an unofficial anthem during their charmed run to the team’s first championship in 57 years, a worldview-altering milestone in a city that cares desperately about its local teams.

Said Mill in a series of tweets following his release:

“I’d like to thank God, my family, and all my public advocates for their love, support and encouragement during this difficult time. While the past five months have been a nightmare, the prayers, visits, calls, letters and rallies have helped me stay positive.

“To the Philly District Attorney’s office, I’m grateful for your commitment to justice. I understand that many people of color across the country don’t have that luxury and I plan to use my platform to shine a light on those issues.

“In the meantime, I plan to work closely with my legal team to overturn this unwarranted conviction and look forward to reuniting with my family and resuming my music career.”

A spokesman for Philadelphia district attorney Larry Krasner said late Tuesday that the Supreme Court’s decision on Meek Mill’s release was consistent with the position taken by their office.

“Meek was unjustly convicted and should not have spent a single day in jail,” Tacopina said.