Shortly after 5pm on Saturday evening the mood at the Riverside is expected to turn almost unbearably poignant. For a few moments at least the impending, potentially season-defining duels, between Adama Traoré and Alan Hutton and Britt Assombalonga and John Terry, will no longer seem to matter quite so much.

As Middlesbrough prepare to kick off against Aston Villa in a play-off semi-final which could help transform club finances and individual careers, Leo Percovich is scheduled to complete an emotional journey from Rio de Janeiro to the stadium’s posh seats.

Boro’s former goalkeeping coach will be serenaded as fans acknowledge his emotional bravery in travelling so far to thank them for their support in the wake of the car crash in Brazil last December which killed the 50-year-old Uruguayan’s daughters Antonella and Valentina, aged five and 10.

Now recovered, physically, from the injuries they sustained as their car plunged off a 20-metre-high bridge, his wife Juliana and son Pietro are scheduled to join Percovich as he pays tribute to those supporters who raised thousands of pounds to help meet their medical costs.

Percovich fell in love with the club and the Teesside area during his days as former Boro manager Aitor Karanka’s key lieutenant, happily engaging with fans as the team reached the Premier League two years ago. 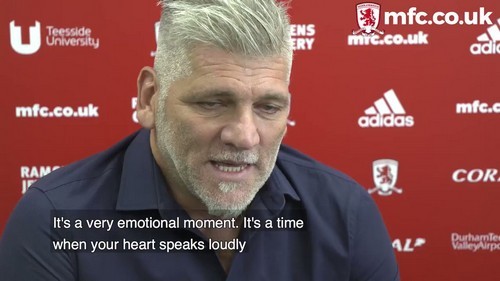 A message to #Boro’s fans from Leo Percovich ? #UTB pic.twitter.com/1ExwyavYyi

Down in the away dugout, Steve Bruce aims to mastermind the fifth promotion of his managerial career but he, too, may struggle to maintain a brave public face.

As Percovich returned to work coaching Fluminense juniors, Aston Villa’s manager was embarking on a “terrible few months” involving the death of his father Joe in February and his mother Sheenagh late last week.

For the past three months Bruce has made the eight-hour round trip from Birmingham to the Newcastle hospital where Sheenagh lay seriously ill three times a week but he remains determined to stave off exhaustion long enough to restore Villa to the Premier League.

Doing so will involve tactically outwitting Tony Pulis by subduing a winger once happily discarded by Villa but now the subject of £30m transfer market interest from, among others, Chelsea. More immediately Traoré is determined to help Boro through this two-leg semi-final before celebrating a Wembley final victory financial experts estimate would be worth a minimum £170m to a club relegated only last spring.

Doing his bit to help secure that windfall, the former Barcelona protege strode to the away end at Ipswich following last Sunday’s 2-2 draw, clutching a large bag filled with replica shirts emblazoned with his name, number and the word “believe”. Traoré distributed them to those who had made the trek south, with his choice of message perhaps instructive. A player never trusted by Tim Sherwood and Remi Garde at Villa and treated with a certain scepticism by Karanka and then Garry Monk on Teesside has morphed into surely the Championship’s most exciting player courtesy of the immense faith Pulis has, somewhat unexpectedly, placed in him.

The former West Brom and Stoke manager, by similarly breathing new life into the suddenly free-scoring Patrick Bamford, has duly deconstructed all sorts of received wisdoms about his supposed modus operandi.

Granted, Pulis never appears averse to using one pass instead of three, 40% of Boro’s goals come from set pieces and he swiftly installed Ryan Shotton, a physically imposing centre-half blessed with a long throw, at right back, yet his startling reinvention of Traoré and Bamford suggests he is an infinitely more subtly nuanced manager than previously advertised.

Boro’s “Red Faction” or “Ultras” – AKA the club’s hard-core support – intend to assist by creating a wall of noise as they proudly unfurl their hallmark “The Infant Hercules” banner.

That was Middlesbrough’s moniker in the glory days when Teesside loomed large on the world map as a key international industrial centre effectively responsible for coating half the planet in steel and metal. Designed and built by a Middlesbrough firm, the Sydney Harbour bridge is just one element of the enduring legacy of the so called “town that built the world”.

Now Pulis hopes its football team can reach and conquer Wembley. “We need the Riverside to be rocking,” he said. “Villa are a massive club with arguably the Championship’s best squad. It’ll be very tough but we’re in good form. I’m looking forward to a tremendous atmosphere.”

Bruce senses the mounting adrenaline. “As I always say: ‘You can smell the hotdogs,’” said Villa’s manager. “You can smell a big occasion like this.”

Ronaldo and co train ahead of qualifier with Switzerland