Stephen Curry has brushed off suggestions that the Golden State Warriors’ dominance has negatively affected the NBA.

Curry and the Warriors swept the Cleveland Cavaliers in last month’s NBA finals to win their third title in four years. They followed that up by adding yet another All-Star, DeMarcus Cousins, to a roster that includes Curry, Kevin Durant, Klay Thompson and Draymond Green, prompting some to complain that next season is already a foregone conclusion.

“So everybody says how we’re ruining the NBA – I love that phrasing,” told USA Today in an interview published on Wednesday. “It’s the dumbest phrase ever. We are always trying to find a way to get better. If we were just happy with winning a championship and staying stagnant, we wouldn’t be doing ourselves justice. Obviously with Durant signing in 2016, with DeMarcus this summer, with the bench guys that we’ve been able to sign, everybody is trying to get better and we just happen to be the ones who set the pace and set the narrative around how you need to structure your team to beat us.”

Cousins is one of the best players in the league but tore his achilles tendon last season, and has been known to clash with teammates. However, Curry said he had no concerns that Cousins will upset the Warriors’ dynamic. “I’ve played with DeMarcus in Team USA stuff,” said Curry. “I’ve played against him. We’ve had run-ins, the teams had run-ins, but it’s going to be fun.”

The NBA’s biggest star, LeBron James, left the Cavaliers after losing yet another NBA finals against the Warriors. He will be seeing more of Golden State though as he joined their Western Conference rivals, the Los Angeles Lakers. “There’s a lot that’s been made about the competition in the West and James’s eight straight finals appearances and all that, but that just makes everybody raise the antenna up a little bit – including us. It’s going to be fun for fans … so the West obviously got stronger with LeBron but you’ve still got to beat us.” 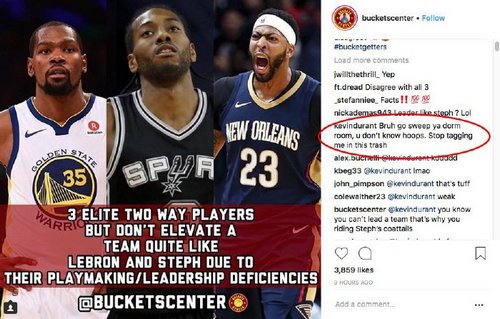 Durant, meanwhile, has been a little less balanced in his off-season comments. The two-time NBA champion and nine-time All-Star got into a heated argument with a 17-year-old high school student on Instagram. The teenager, who goes by the handle @bucketscenter, managed to rile Durant, who turns 30 in September, by suggesting he did not elevate his team as much as James or Curry. Durant told @bucketscenter to “go sweep your dorm room” before calling him a “middle school/knock off stephen a,” a reference to ESPN personality Stephen A Smith. The argument then continued with Durant saying “you’re like 12, your opinion will not be used as any motivation”.

The Warriors have yet to confirm whether Durant has printed out @bucketscenter’s comments and taped them to his locker.

Simona Halep out of WTA Finals after Elina Svitolina loss