Neil Lennon says he should escape punishment for his on-pitch celebration of Hibernian’s equaliser in an extraordinary 5-5 draw at home against Rangers after accusing the visiting support of targeting him with sectarian chants.

The Hibernian manager ran on to the field for around 10 seconds after Jamie Maclaren levelled in stoppage time and was ushered down the tunnel by the fourth official, Bobby Madden, before the final whistle blew.

The incident is likely to result in Lennon – who has a suspended two-match ban for his behaviour towards the referee Kevin Clancy in February – facing punishment. But he said his aeroplane-style celebration was his response to taunts from the away end. 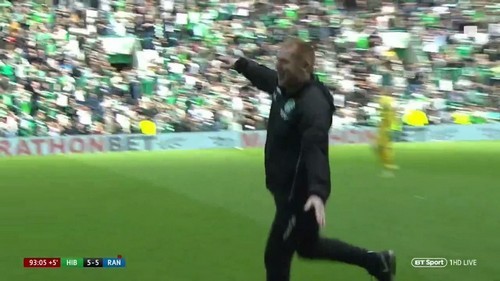 He runs on the pitch to celebrate Hibs’ late equaliser!

“Well they make it personal don’t they?” he said. “You all hear it. They are singing sectarian songs at me. It’s just a little bit of: ‘Have some of that.’

“It was worth it. Trust me. Bobby was fine about it. I should not get a ban for that. I was just letting them know how pleased I was to get the equaliser. I enjoyed the moment. It was a big jumbo jet there.”

Lennon’s description of the action as “absolutely bonkers” summed up an astonishing game. Rangers looked set to be blown away when Florian Kamberi, Scott Allan and Maclaren put Hibs 3-0 up after 22 minutes. But they mounted a stunning fightback: James Tavernier, Jordan Rossiter, Bruno Alves, Jason Holt and Josh Windass took them into a 5-3 lead.

Another Maclaren goal set Rangers on edge and after Holt was sent off Maclaren completed his hat-trick by prodding in an equaliser.

Rangers had to better Aberdeen’s result at Celtic to claim second spot and they finished third after Aberdeen won 1-0 thanks to an Andrew Considine goal early in the second half. Aberdeen’s Shay Logan was shown a red card after the final whistle. Derek McInnes said he was not sure exactly what prompted the sending-off, although Logan was involved with certain Celtic players amid some exuberant celebrations towards the home fans.

Football hooligans gave at the mercy of the security forces