Let’s get the obvious out of the way first: judging the NFL draft less than 24 hours after it has ended is a thankless exercise. It will be years before we can look back and say which teams made mistakes.

For this reason I would like to add this disclaimer before we sort the winners and losers: The article you are about to read contains a number of predictions and opinions that will look incredibly silly with benefit of hindsight.

This probably could have gone without saying. Being the top overall pick is a win even if it means starting one’s career with the Cleveland Browns.

OK that a low blow, but it might be time to make “lol Browns” jokes while we still can. Cleveland might not be the doormat of the league for very much longer. Along with Mayfield, the Browns picked up Ohio State cornerback Denzel Ward with the fourth overall pick and continued to stockpile young talent and future assets in later rounds. Browns fans have earned the right to feel cautiously optimistic about the future although they know better than to say anything along those lines out loud.

Mayfield emerging as the number one pick was especially noteworthy considering his competition. He was one of several quarterbacks chosen in the first round. The New York Jets took USC’s Sam Darnold at No3, the Buffalo Bills took Wyoming’s Josh Allen at No7 and the Arizona Cardinals drafted UCLA’s Josh Rosen at No10.

Expect this to be the norm for the foreseeable future. It’s never been more important for a NFL team to have reliable play-caller and it’s never been more difficult to find one through trades and in free agency. For many teams, the draft might be the only place they can hope to find a new franchise player.

One quarterback did not enjoy his draft experience despite going in the first round. Given the current state of the QB market, it was somewhat baffling that the talented Jackson, the Heisman trophy winner in 2016, nearly fell out of the first round altogether. The Baltimore Ravens were more than happy to scoop him up at No32. You have to think he’s going to remember every single player picked in front of him.

In the weeks leading up to the draft there was plenty of talk about the New England Patriots being one of the teams interested in Jackson. It made prefect sense: The Patriots desperately need a QB of the Future after trading away Jimmy Garoppolo and (to a lesser extent) Jacoby Brissett last season.

Of course it’s never that easy. The Patriots passed over Jackson. Instead, New England did what they always do: maniacally swapping picks as head coach Bill Belichick continued his single-minded pursuit of value at all cost. The Patriots’ 2018 draft can probably be best summed up by the headline: “Patriots have made more trades than picks so far”. Of course, if there’s yet another trip to the Super Bowl in the cards, I’m sure you find too many fans complaining.

Loser: The ‘death of the running back’ narrative

Over the last few decades, we’ve been talking abut the NFL evolving into an increasingly pass-happy league. That’s a big reason why so many teams have found themselves on a perennial pursuit for a franchise QB (and many of those would even settle for a “just OK” one).

In the modern league, the emphasis on the passing game has led to a devaluation of running backs, who are now mostly seen as complementary parts of a modern NFL offense rather than a focus. They’re not as clearly disposable as kickers currently are, but they’re in similar boats. On top of that, running backs wear down quickly thanks to the abuse they absorb and their peaks often only last a few years.

As a result, teams rarely draft running backs in the early rounds. There’s a belief that a decent running back can just be found somewhere later on, and that you definitely should think twice before giving up a first round draft pick for one.

While all of that might be true in a general sense, it doesn’t mean that a talented running back can’t make an impact. While it used to be that you’d see the entire round go by before the first RB went off the board that was never going to be the same here.

Things went a little bit differently in the early rounds of this year’s draft. It started with the New York Giants taking Penn State’s Saquon Barkley as the second overall pick, which wasn’t necessarily a surprise considering he was almost unanimously considered one of the best offensive players in the draft. The distance between Barkley and his peers was so great that the next RB wouldn’t come off the board until the Seattle Seahawks somewhat controversially took San Diego State’s Rashaad Penny with the No27 pick. The the Patriots meanwhile took Georgia’s Sony Michel at No31. The ground game is still alive in the NFL, it seems.

We were promised a parrot that could talk. For shame. 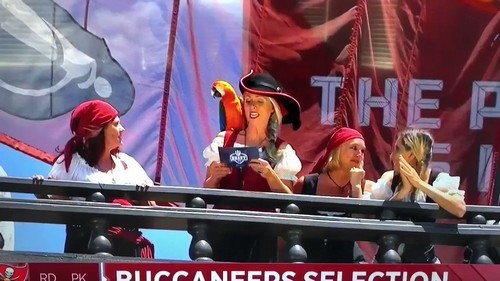