As LeBron James rampages through the NBA playoffs, his fellow players can do little more than shake their heads in admiration. James scored 43 points and had 14 assists on Thursday night, helping the Cleveland Cavaliers to a 2-0 lead over the Toronto Raptors in the Eastern Conference semi-finals. James had help from Kevin Love, who had 31 points and 11 rebounds, but at other times over the last few weeks he has appeared to beat teams on his own: he is averaging 34.4 points, 9.9 rebounds and 9.0 assists per game in these playoffs. 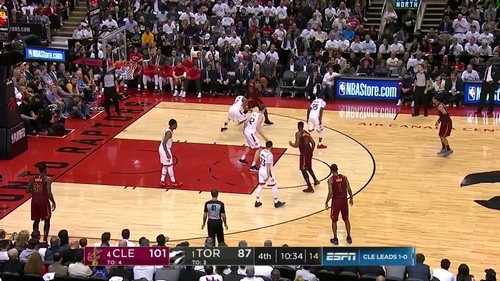 “That thing was in the air so long it should have a movie on it.” pic.twitter.com/ioUdM7H3Zw

On Thursday, James poured in shots from improbable angles and there seemed little that the Raptors – who finished the regular season with the best record in the Eastern Conference – could do to stop him. “If LeBron is hitting fadeaways like that … nobody can guard him,” wrote the Brooklyn Nets’ DeMarre Carroll on Twitter.

Love said that he had a feeling before Thursday’s game that James would produce something special. “This morning you could just sense it,” Love said. “He knew what was at stake, he knew us getting another win here was going to be huge for us. He came out and he played that way from the jump. You could just sense that he was going to have a special night.” 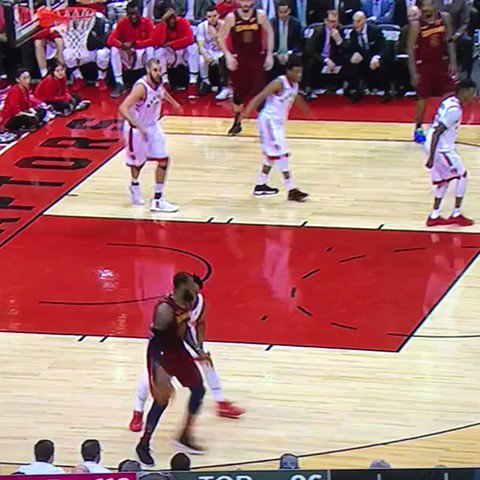 The Portland Trailblazers’ CJ McCollum cited a moment where James held off All-Star DeMar DeRozan before hitting a shot to illustrate the 33-year-old’s skills. “Crazy how much distance he covers on the spin to get to the fadeaway,” wrote McCollum.

Orlando Magic center Nikola Vucevic praised the way James brings his team-mates into the game. “I know LeBron hit some crazy shots but the way he gets everyone involved and how he sets them up for good looks and looks for mismatches is amazing. His bball IQ is out of this world,” wrote Vucevic on Twitter.

In Thursday night’s other game, the injury-depleted Boston Celtics beat the Philadelphia 76ers and lead their series 2-0.