Northampton Saints players have been on team bonding trip to a shooting range before they take aim at the Champions Cup this weekend.

Captain Dylan Hartley and the Saints squad visited the Courteenhall Estate in Northamptonshire on Tuesday morning ahead of their European opener against reigning champions Saracens on Sunday.

But there was a west Midlands feel among the team from the east, as some of the group turned out looking like extras off the set of Peaky Blinders. 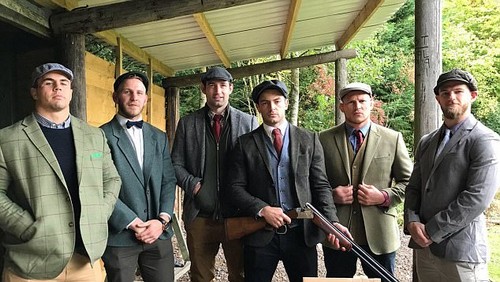 Hartley posed with a group of team-mates, including Matt Beesley and Stephen Myler, all decked out in blazers and flat caps, much in keeping with the 1920s period drama.

Others opted for more modern attire, with Courtney Lawes also on site, along with Ben Foden and Jamie Gibson.

Jim Mallinder and his squad have been on target with their start to this season and sit third in the Aviva Premiership after their first six games.

It’s a fine response to what was a difficult start to the season, when they were humbled by Sunday’s opponents Saracens at Twickenham.

Mallinder’s men were beaten 55-24 in the season’s curtain-raiser and will be out to exact a bit of revenge at Franklin’s Gardens.

Best leave the guns behind though lads.