Peru kept alive their hopes of a first World Cup finals appearance since 1982 as they drew at home to Colombia, who booked their place in Russia next summer.

The Peruvians went into the game in fifth place, knowing a win would seal them an automatic spot at the World Cup and a draw a likely play-off spot.

Paolo Guerrero got the all-important equaliser after James Rodriguez, one of the stars of the last World Cup, looked to have ended Peru’s dream. 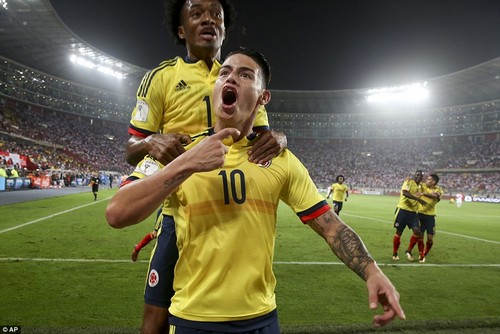 Both sides went into the match knowing what could be achieved. For Colombia it was something they had experienced all before, but for Peru’s players it was a completely new experience.

Once Rodriguez’s goal arrived after 56 minutes, Peru’s dreams of playing Russia next summer appeared to be over.

They would demonstrate those qualities again just 20 minutes after Rodriguez’s strike.

Peru were awarded a free-kick outside of the Colombia penalty area and to the right side.

Guerrero, who plays for Flamengo, stood over the ball. Peru’s best technical player had a chance. He struck the ball cleanly with his right boot and Colombia and Arsenal goalkeeper David Ospina couldn’t keep the effort out as it crept through his gloves and into the goal.